The Soča Valley in Slovenia: Tips for the Most Beautiful Places

by Sommertage
in Blog, Europe, Slovenia

When you first see a photo of the turquoise-blue Soča, you would suspect that Photoshop was involved. But in fact, this is not the case at all. In reality, the saturated colours of the river look even more magical and stunning than you see in the pictures. With countless gorges and valleys, the Soča region is the most beautiful natural spectacle in Slovenia – and with good reason.

Waterfalls, rapids, suspension bridges and of course the surreal turquoise blue of the alpine river – we dare to say that nowhere else is the nature in Slovenia as captivating as it is in the Soča Valley.

In this blog article, we will show you why the Soča Valley should be on your itinerary through Slovenia. We’ll also share with you our favourite stops and attractions, as well as our self-tried and tested tips.

1. Journey through the Soča Valley: What You Should Know

The Soča begins up in the Julian Alps of northern Slovenia and makes its way down to Italy (where it is then referred to as “Isonzo”) before flowing into the sea at the gulf of Trieste.

The Soča Valley is an adventure heaven for those adrenaline seekers: from kayaking and rafting, to canyoning and much more. In addition, there is an abundance of short and long hikes through natural forests, waterfalls and many beautiful landscapes.

The best travel period for the Soča Valley

We personally think that spring is the most ideal time to visit this region because the Soča Valley is not as busy compared to the summer months. We very rarely encountered anyone on our hikes.

According to the hotel staff, it usually starts to get quite crowded in Bovec and the surrounding regions during the peak months. However, the upside of going in summer is that you can go swimming, whereas the water is still too cold for most people during the spring and autumn months.

How much time should you spend in the Soča Valley?

It usually isn’t so difficult for us to recommend a specific amount of time to spend in a place or region. Although you can drive through the valley in one day and stop at certain spots, there is so much more to this region than just photo spots. You can easily spend a week here, doing beautiful hikes and outdoor adventures.

We only stayed for one night in the Soča Valley and our hotel was located in Bovec – we will tell you more about our accommodation at the end of the article. In hindsight, we would like to have stayed longer, but of course this down to personal preference, whether you want to stay in one place longer or if you prefer to move around more.

2. The Most Beautiful Places in the Soča Valley: Highlights & Tips

Along the Soča Valley, you will find countless beautiful places to stopover. Whether you are travelling from south to north or vice versa, it doesn’t really matter. We decided to start from the south, more precisely from Piran, and therefore will share our highlights with you in this order. At the end of the blog article, you will find an interactive map with all the mentioned places and sights pinned on there.

Through the Vipava Valley to Kanal ob Soči

Coming from the south (Piran) we decided not to go with the fastest route, which the GPS recommended. Instead, we followed the advice of Kathi’s father (an expert when it comes to Slovenia) and drove through the picturesque Vipava Valley. We would like to have stayed longer and done a nice hike, but unfortunately there was not enough time.

Just a little north of Nova Gorica, you will finally reach the stunning Soča. From here on, it’s a very scenic drive along the riverside. The striking green colour of the river is distracting to say the least. This section is more green than turquoise blue, which you will see later on. However, the curving roads will demand utmost attention when driving.

Our first stop was at the picturesque Kanal Ob Soči. The stone bridge with its Church Tower and running river is like a postcard motif, even in moody rainy weather – as you can see below. 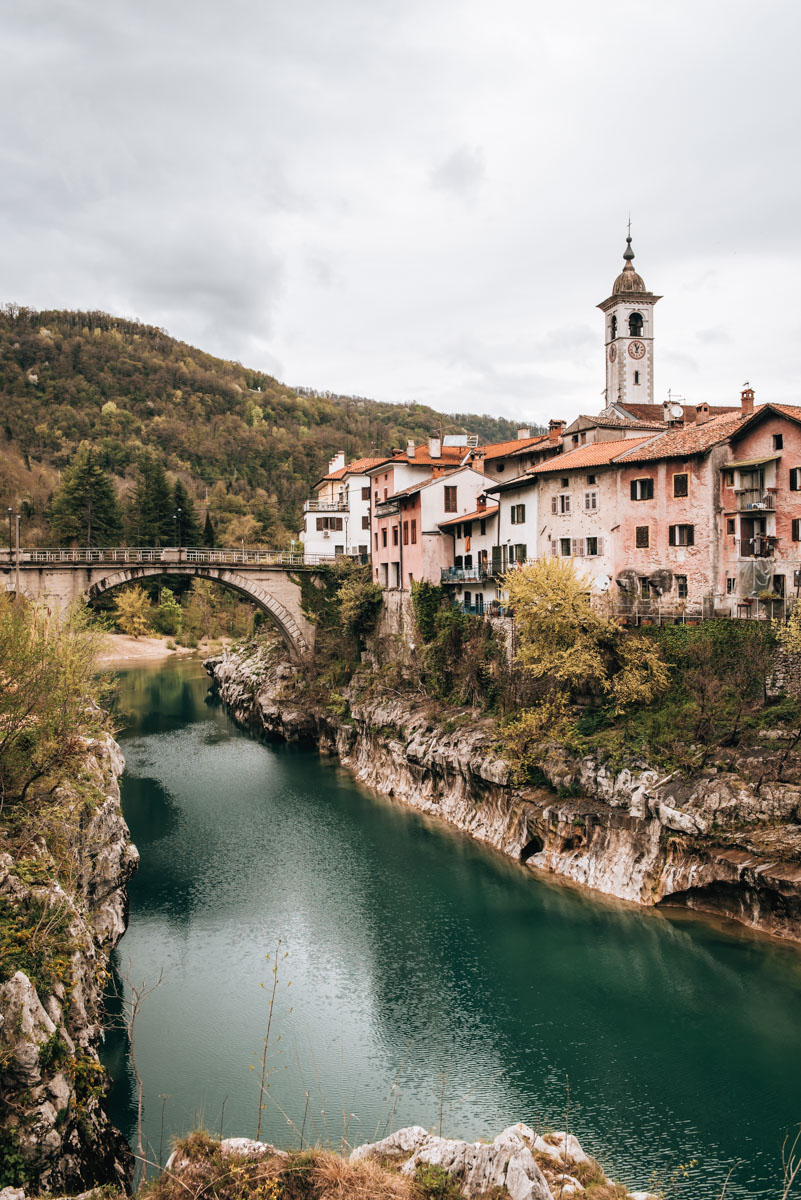 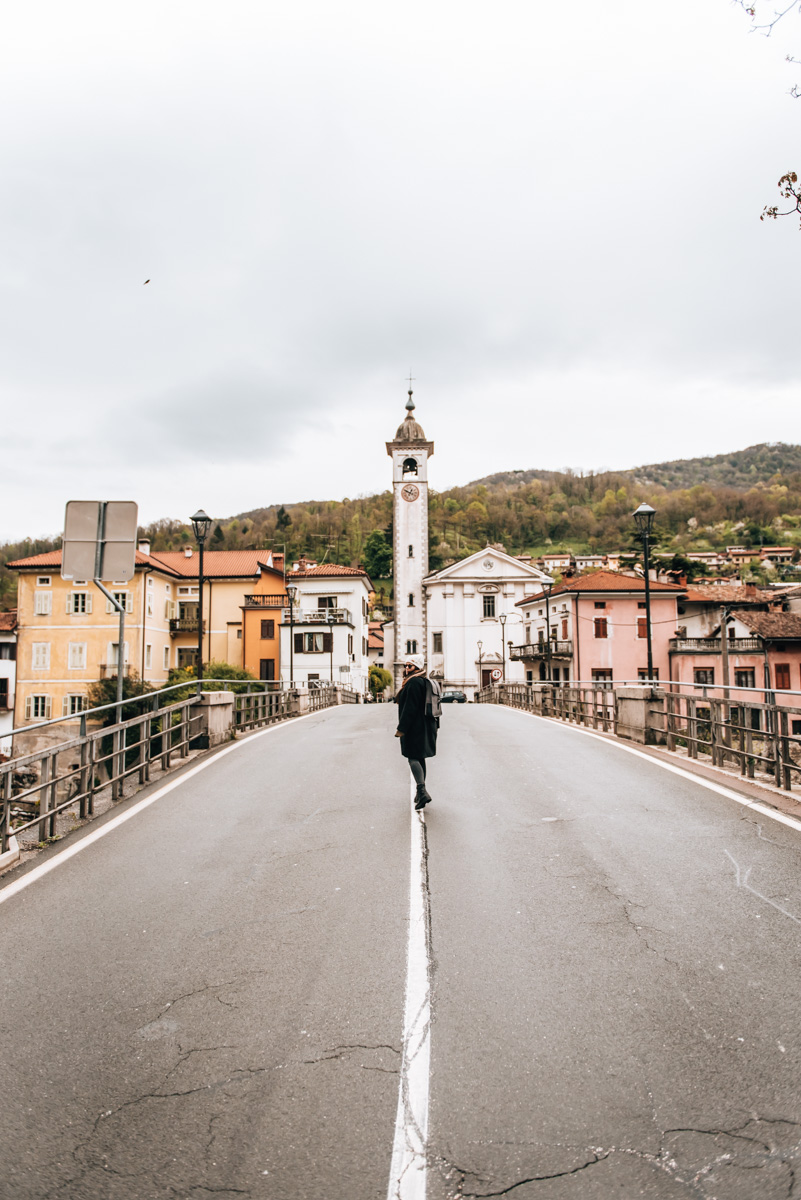 Via Tolmin to Kobarid

The road then continues north to a slightly bigger town of Tolmin. By “bigger” we mean that it’s large enough to have a Hofer Supermarket here.

If you have enough time, which we unfortunately did not have, then you could stop by the Tolmin Gorges (“Tolminska Korita”), which is said to be very beautiful and only a few minutes drive from the centre of Tolmin. Supposedly, there is a stunning 1.5 hour walking track circuit, which leads you through some spectacular gorges.

From Tolmin, we continue onwards to Kobarid, one of the most famous places in the Soča Valley.

Probably the most visited building in Kobarid is the local museum. Kobarid was the scene of several gruesome battles during World War I and this museum tells the story of Kobarid in a very compelling way. 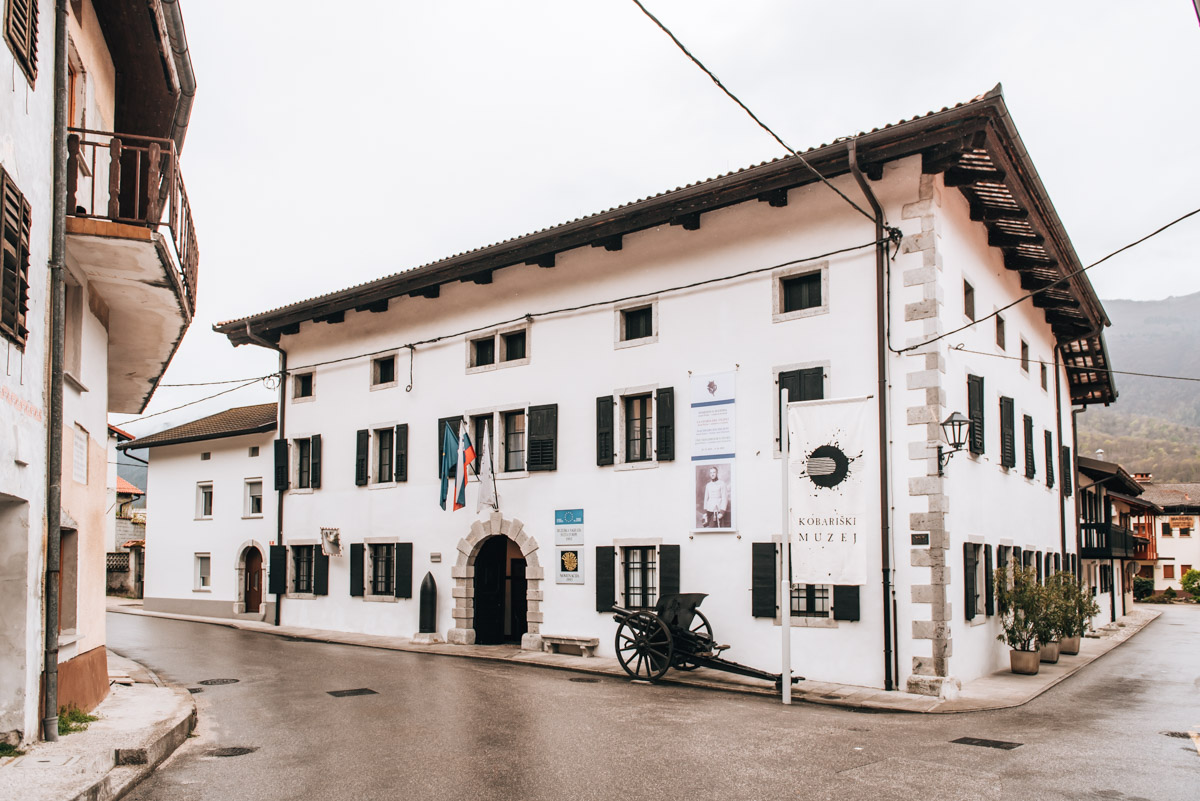 Just outside the centre of Kobarid, you will reach the striking Napoleon Bridge, which only has one arch to it. Once upon a time, Napoleon’s troops marched through here – hence the name. A nice photo spot, no? 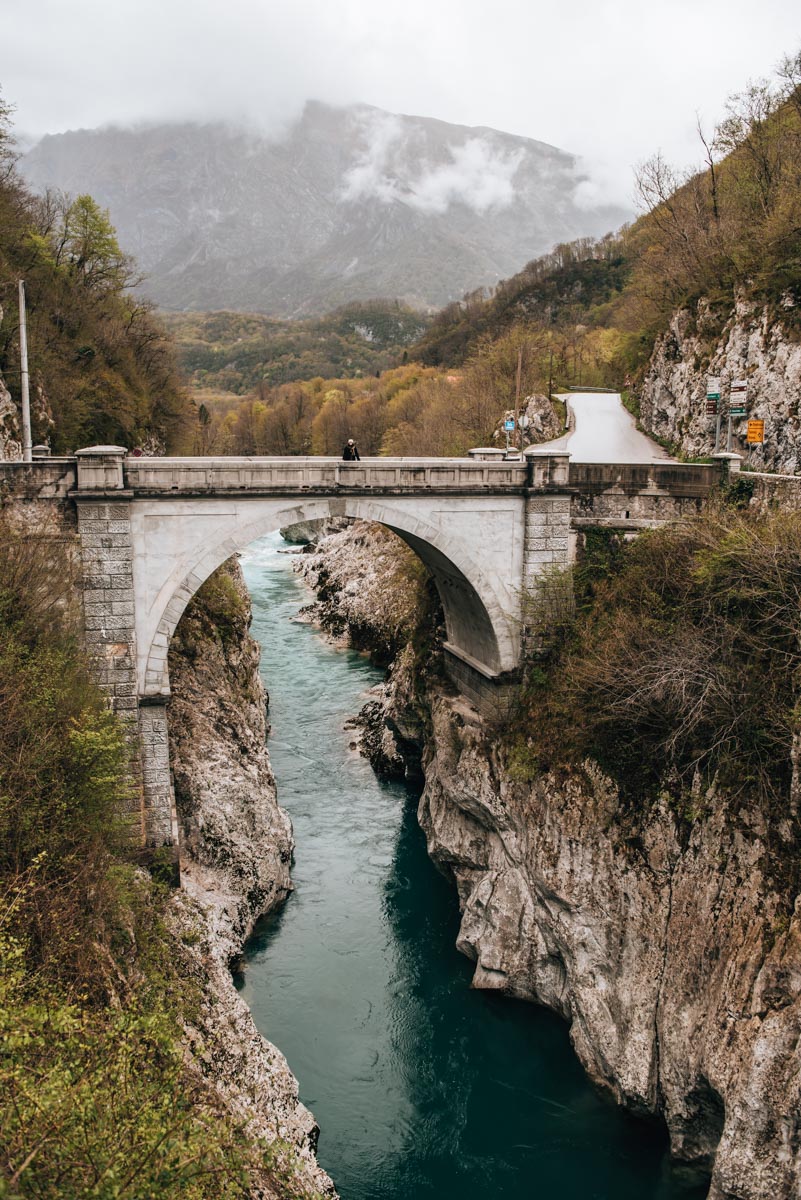 The Kozjak Waterfall (“Slap Kozjak”) is certainly one of the most beautiful waterfalls in Slovenia. Just a few minutes by car from the Napoleon Bridge and you will reach the designated car park, which is located near the campsite.

From the car park, it only takes about 30 minutes before you reach the approx. 15 metre high Kozjak Waterfall. First, you will cross a rather dizzying suspension bridge. Then you follow a forest trail, which leads you to the first waterfall, before it goes through a mystical gorge to the real wonder – the stunning Kozjak waterfall. 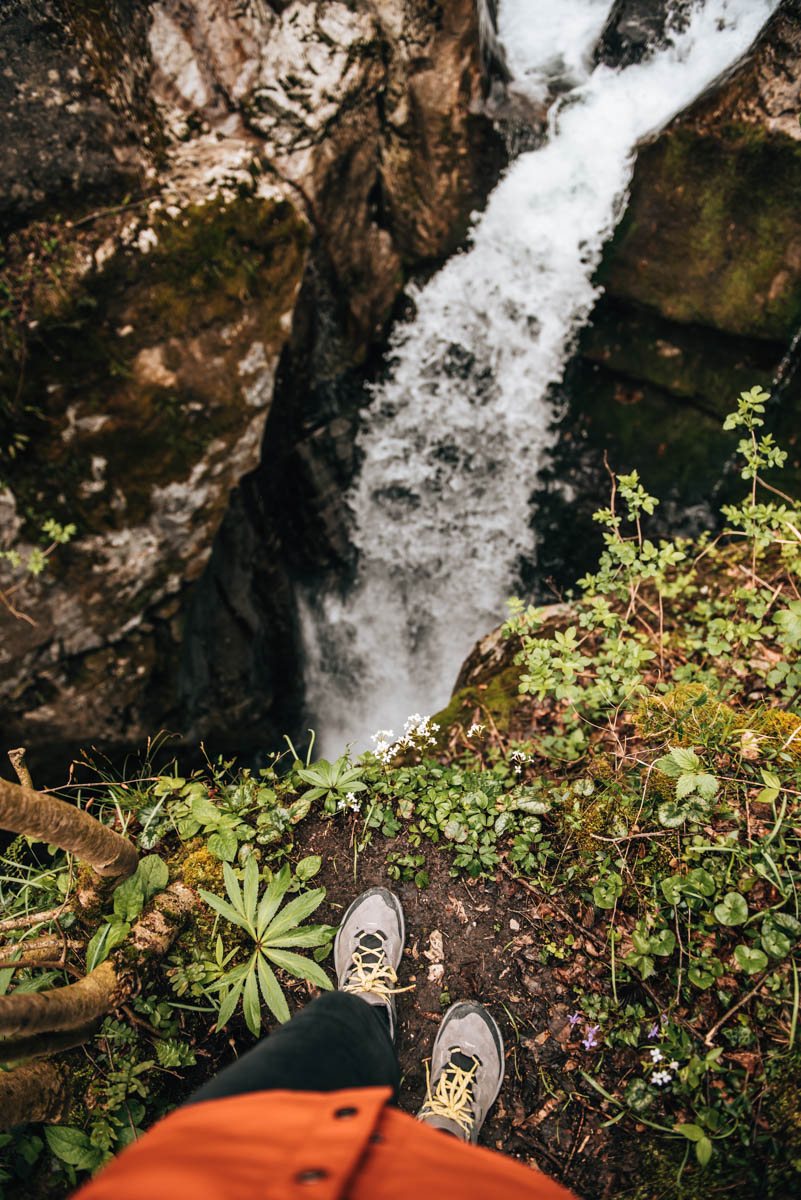 From Kobarid, it only takes about 20 minutes to Bovec, which is where we chose to spend our night in the Soča Valley. Bovec is probably one of the few places in the Soča Valley that houses most of the accommodation. This makes sense because unlike most other places in narrow valleys, there is actually enough space here. Although it is surrounded by spectacular peaks, it has a larger area of flat terrain.

To be honest, we had expected a bit more from the highest waterfall in Slovenia. This is not because the Boka waterfall (“Slap Boka”) was not impressive, but rather that the viewpoint was too far away to be able to admire the waterfall in all its glory. Unfortunately, the waterfall was also rather dry during our visit.

The standard lookout point is about a 15 minutes walk from the main road – it is also possible to park at the Hotel Boka. Unfortunately, we were not able to get as close to the waterfall as we would have liked.

Next time we would probably opt for the more challenging ascent to the waterfall, which runs up on the right side of the waterfall. But of course, take care and inform yourselves of the conditions beforehand. 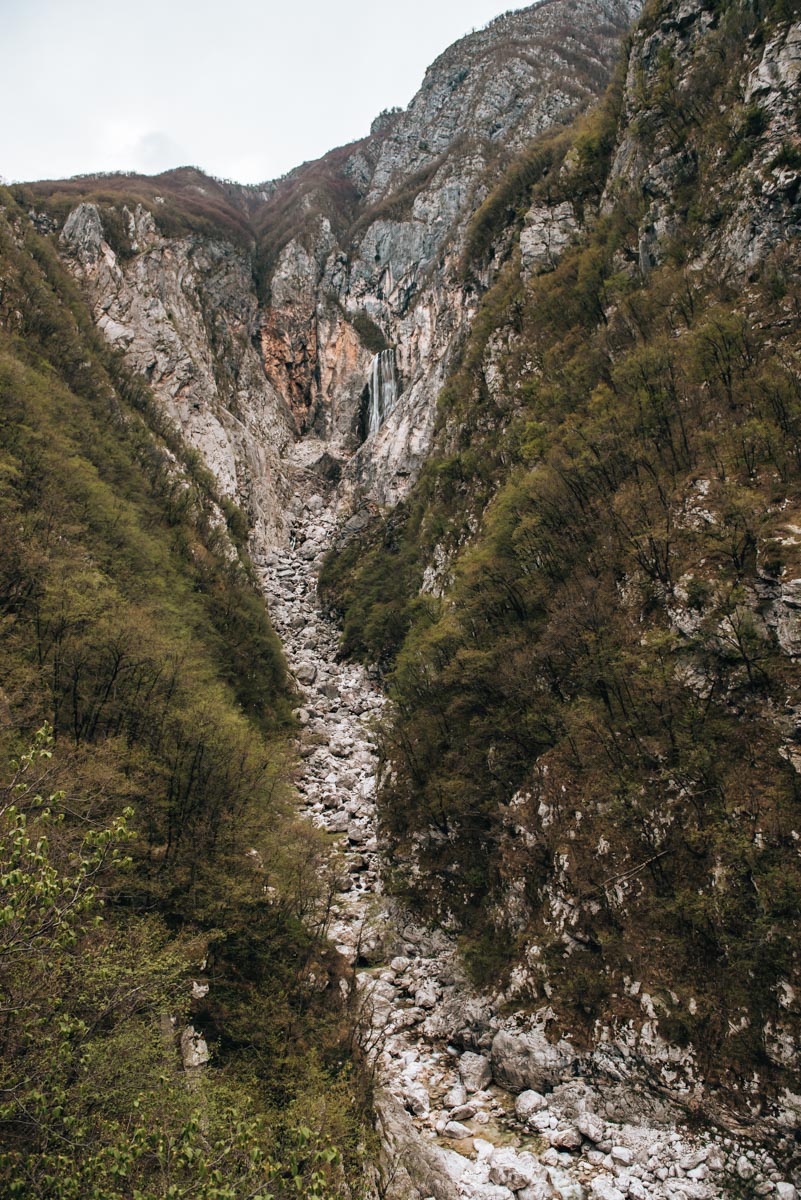 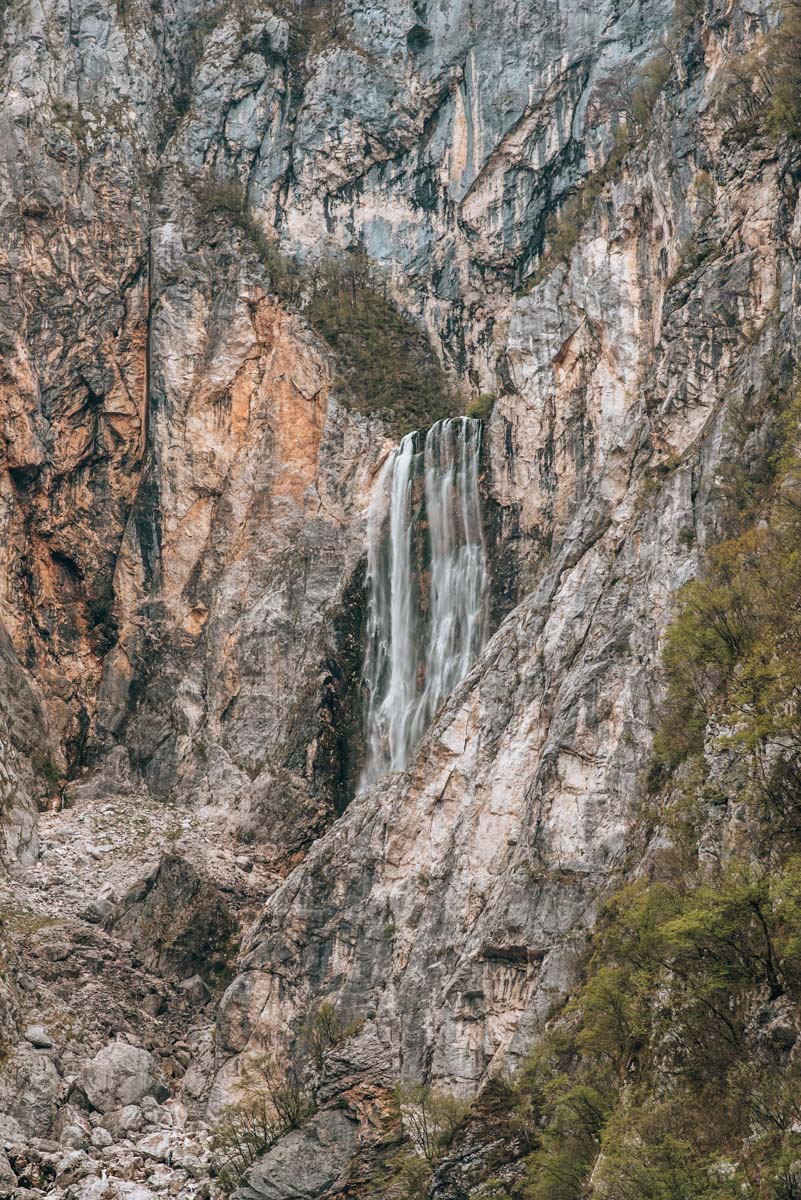 Wow! We were so fortunate that one of the hotel staff (at Hotel Sanje ob Soči) gave us the tip to visit to the Velika Korita. According to her, this place is a must-see in the Soča Valley. What can we say? She was absolutely right!

The Velika Korita is undoubtedly the most impressive natural spectacle in the Bovec region. The water gushes down through the narrow gorges with an astonishing amount of power.

Depending on how much you love the adrenaline rush of heights, you can get quite close to the edge of the cliffs. But you can also comfortably reach the halfway point and get a nice view of the river. Just before the small wooden bridge, we took the opportunity to climb down a bit and get a better look at the gorge from this perspective.

If you are not the biggest fan of heights and cliffs, then we have a tip for you on how to see the Velika Korita from a more comfortable stand-point. There is a small parking lot along the main road at the height of the large suspension bridge (but on the other side of the mentioned trail). From here, you can get a spectacular glimpse into the depths. 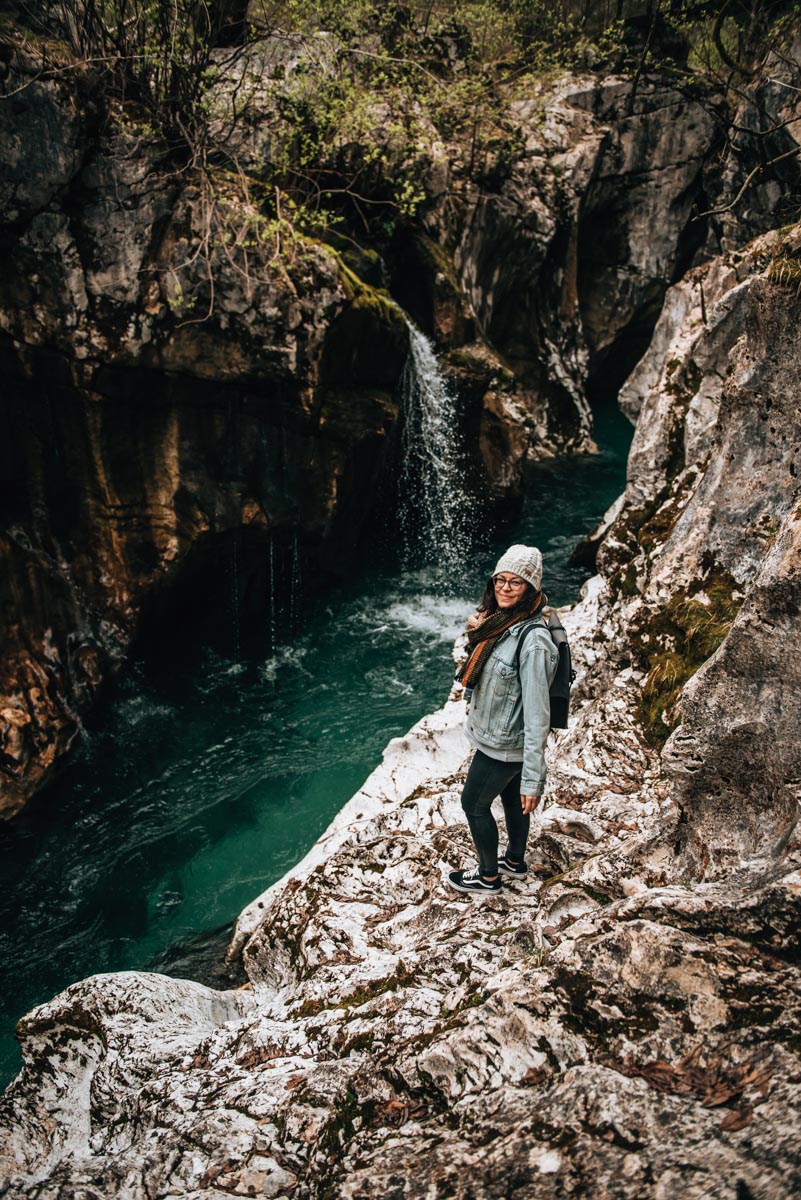 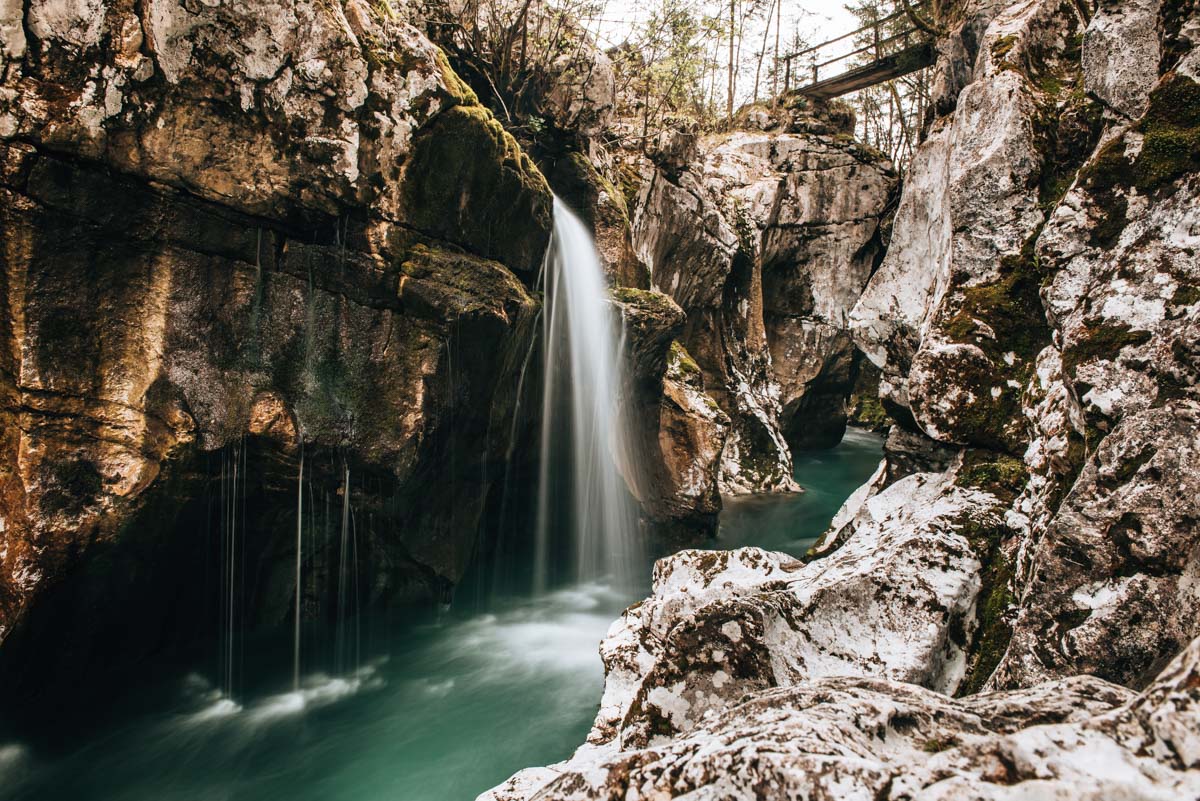 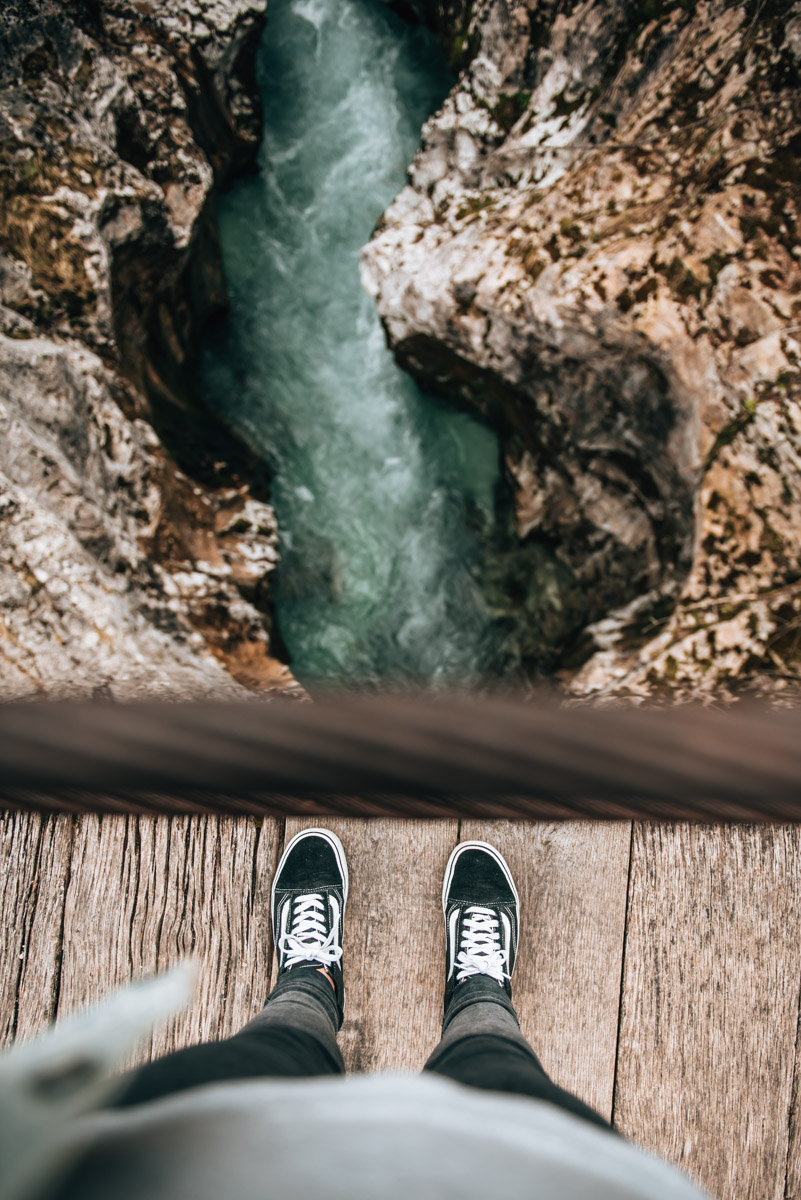 The Water Hurst of Šunik is also a little secret tip. Located near the Soča Valley near Lepena, you walk for about half an hour along forest tracks, suspension bridges and boardwalks around cascading waterfalls.

The further you get, the louder the noises and the more impressive the view of the falls. Our conclusion: one of the most beautiful places we have ever seen – we cannot recommend it enough! 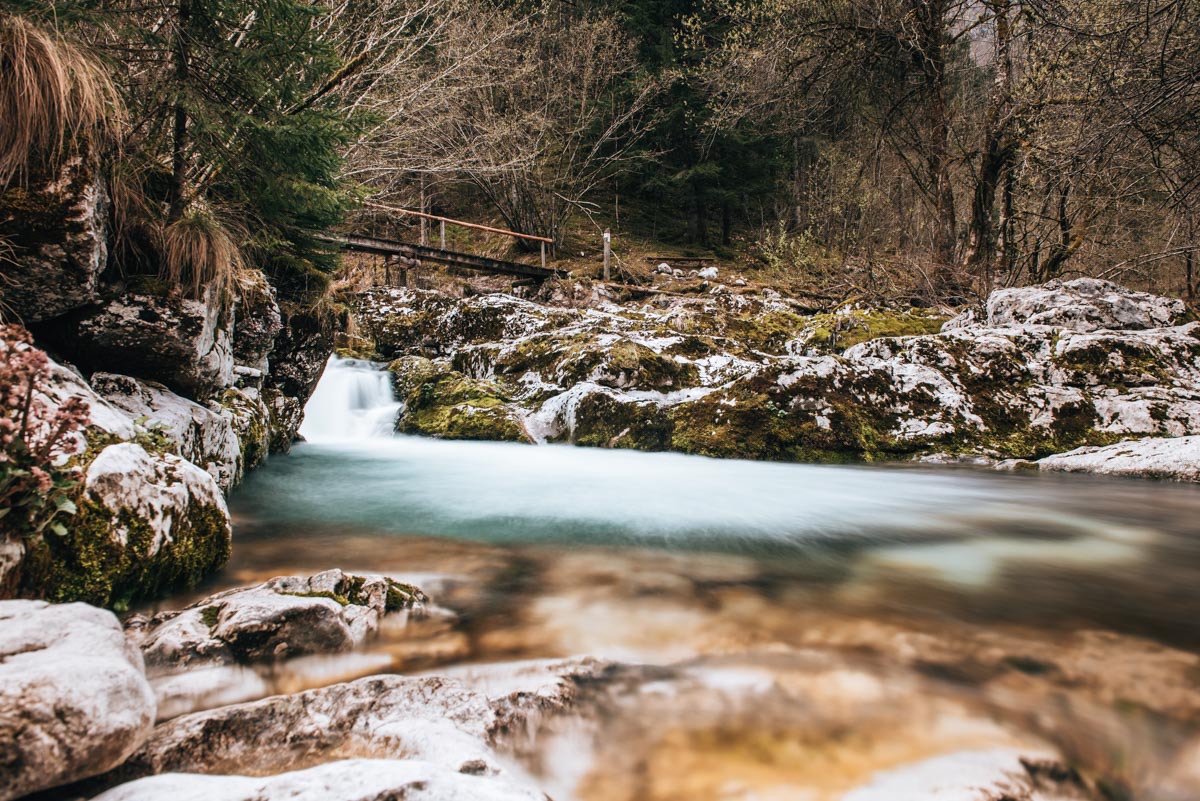 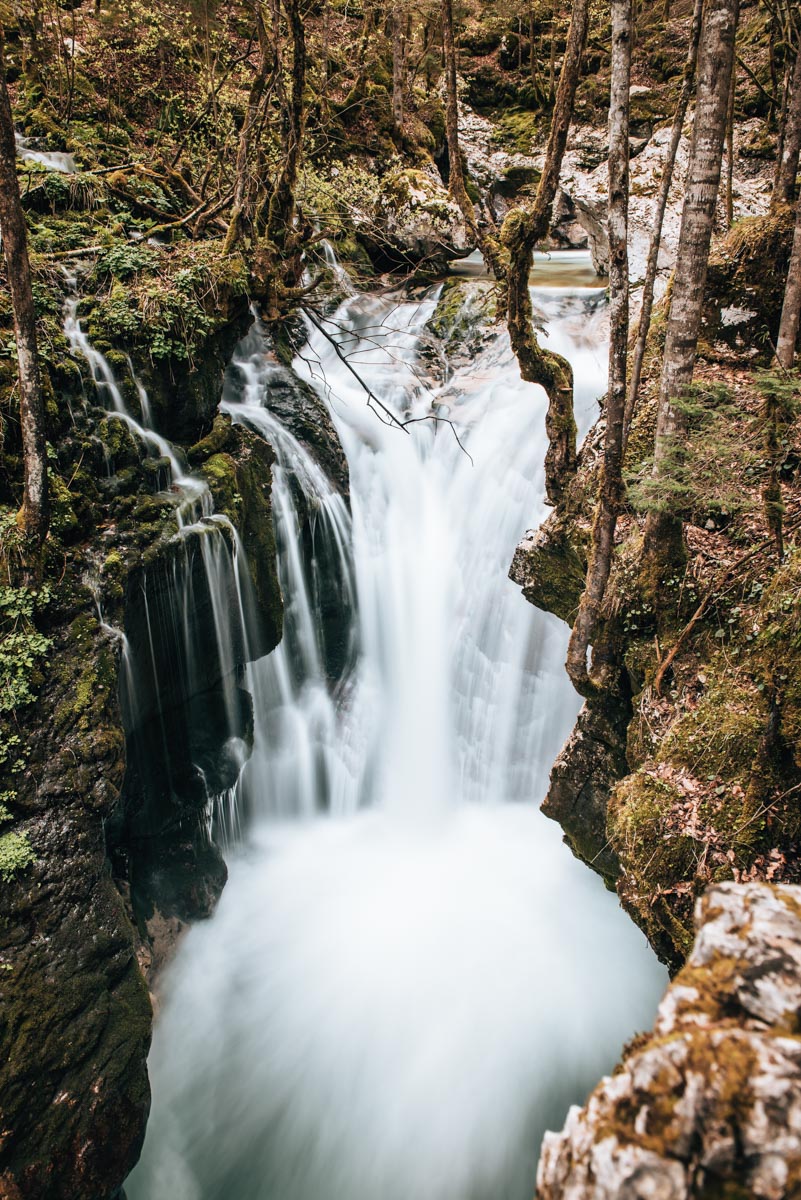 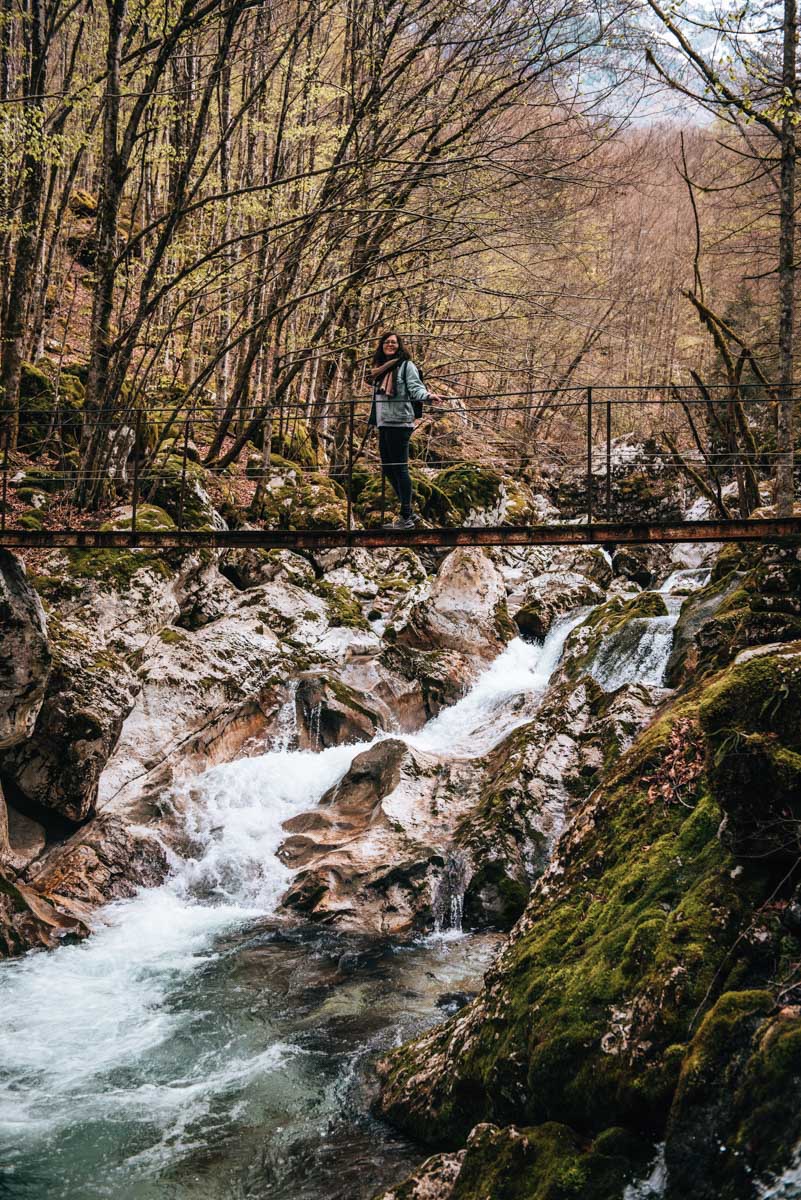 We have saved one of the best highlights of Slovenia for last: the Vršič pass crossing. Not exactly the fastest way back to Austria, but certainly the most spectacular. With about 50 hairpin bends, it leads you over the impressive mountain pass from Trenta to Kranjska Gora. On the northern side, you will find some road sections still made of cobblestone.

At 1,611 metres altitude, the Vršič Pass is the highest pass in Slovenia.  During winter, this pass is usually closed due to heavy snow. But don’t worry, sometimes the pass is open earlier than actually stated. For example: it was said that the Vršič Pass would be open in May, but in fact the pass was already open to vehicles in February 2019. 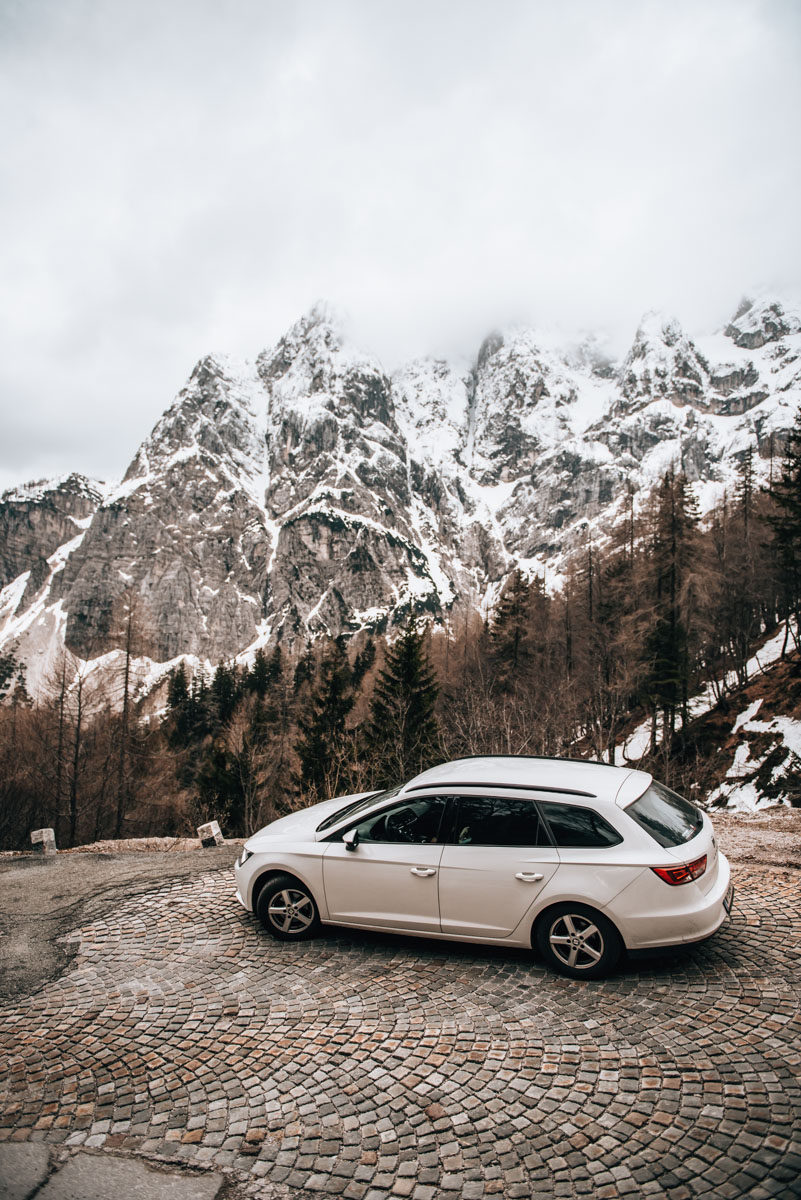 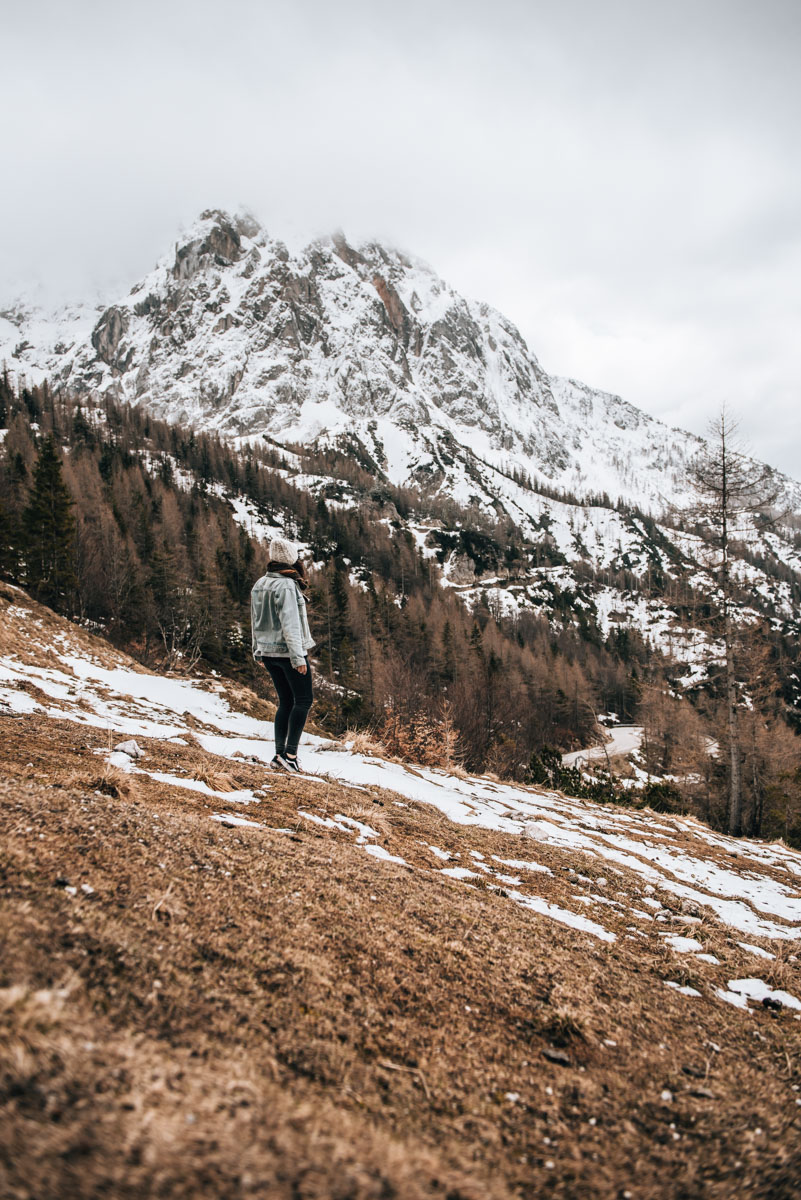 We reached the other side of the pass much faster than expected and came across the Jasna Lake. The fact that this lake is artificially created certainly does not over shadow the fantastic surrounding scenery. If you feel like taking a short break here, then the Villa Triglav would make for a lovely coffee break out on the terrace.

Kranjska Gora itself is not so spectacular, but we have a very special tip for you. Just a few minutes from the centre of the village, there exists a very beautiful natural spectacle. We were very impressed upon reaching the Zelenci Nature Reserve.

Imagine a scenic landscape with a wooden pier, a green lake and mountains in the horizon – such a unique perspective. You can easily reach the Zelenci Nature Reserve via a 10-minute walk from the main road. 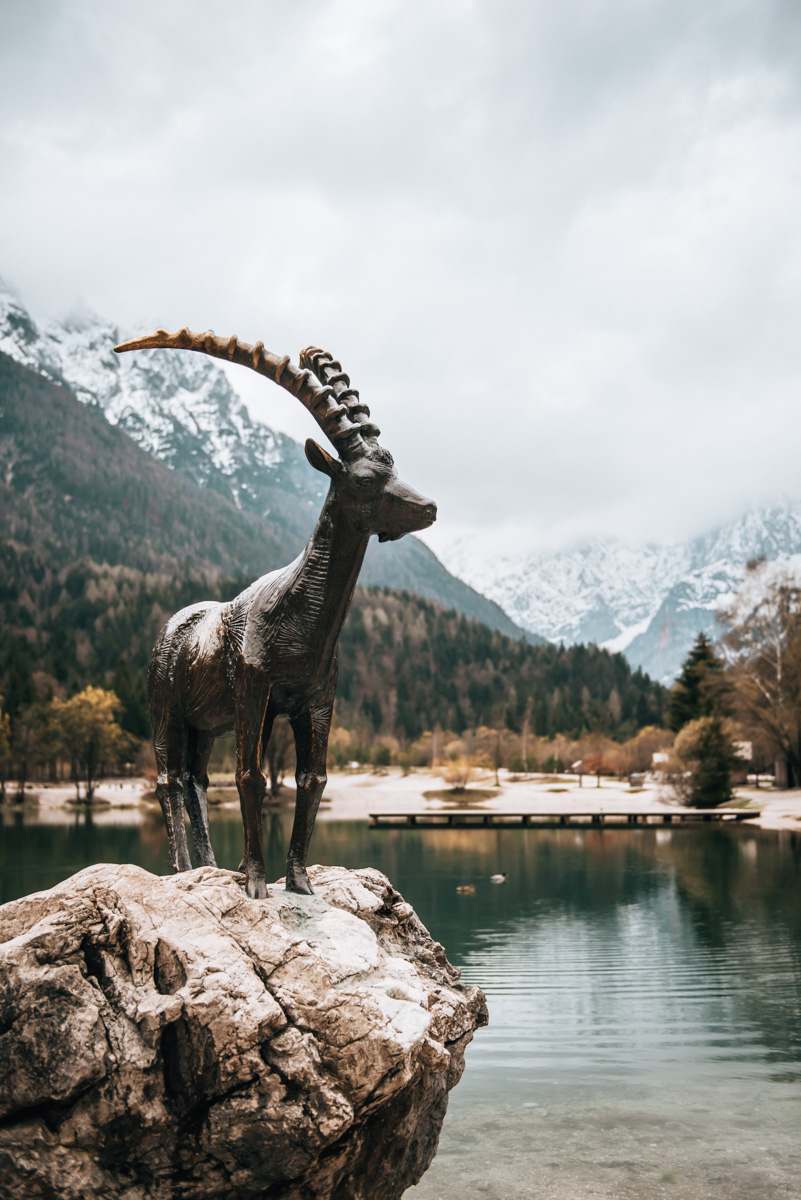 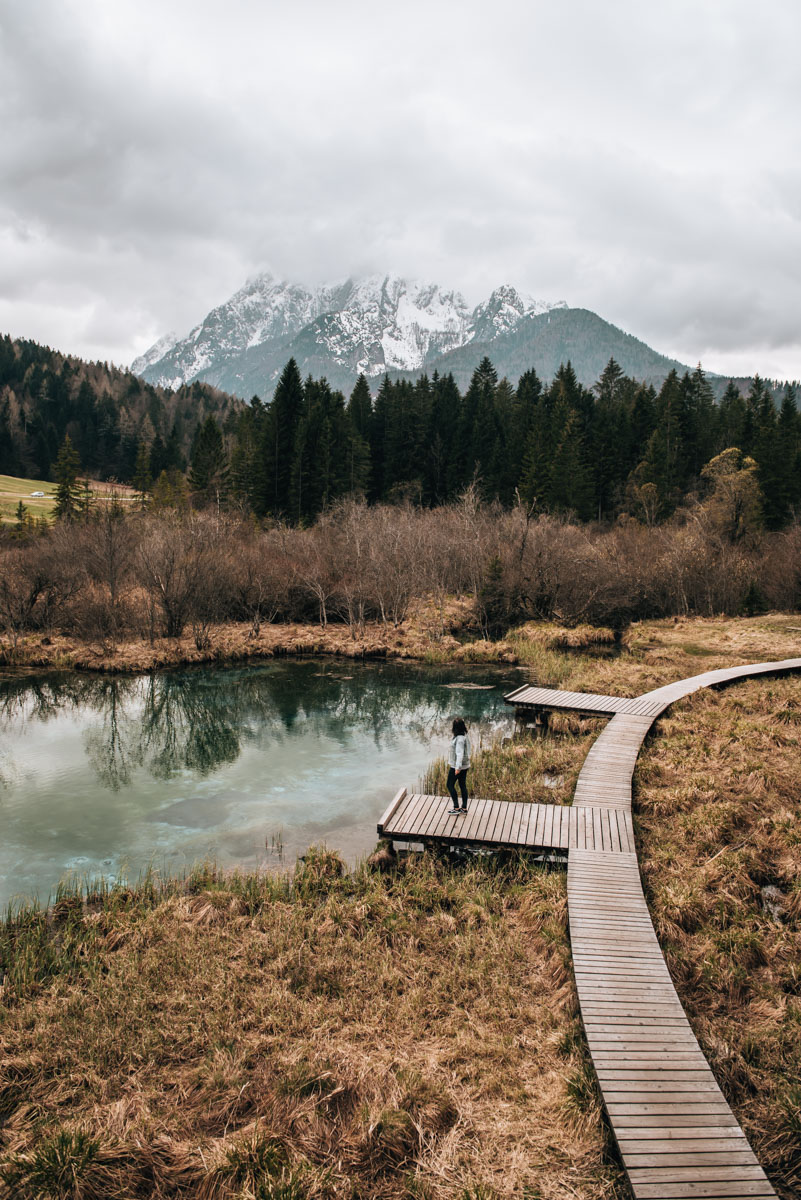 3. Our Accommodation in the Soča Valley

Out of all the beautiful places in the Soča Valley, we decided to stay in Bovec, at the Hotel Sanje ob Soči, which we can highly recommend.

Although the hotel looks more stylish from the outside than the room itself, the apartments were quite spacious and rather well equipped – in any case, we felt right at home. Our apartment was also on the first floor and we had a beautiful view of the mountain tops from our terrace.

The staff were incredibly friendly and helpful – they would always give us excellent tips. Breakfast was also great, with many regional specialties on offer, including homemade jams and regional cheeses.

You can view/book the hotel here: Hotel Sanje ob Soči 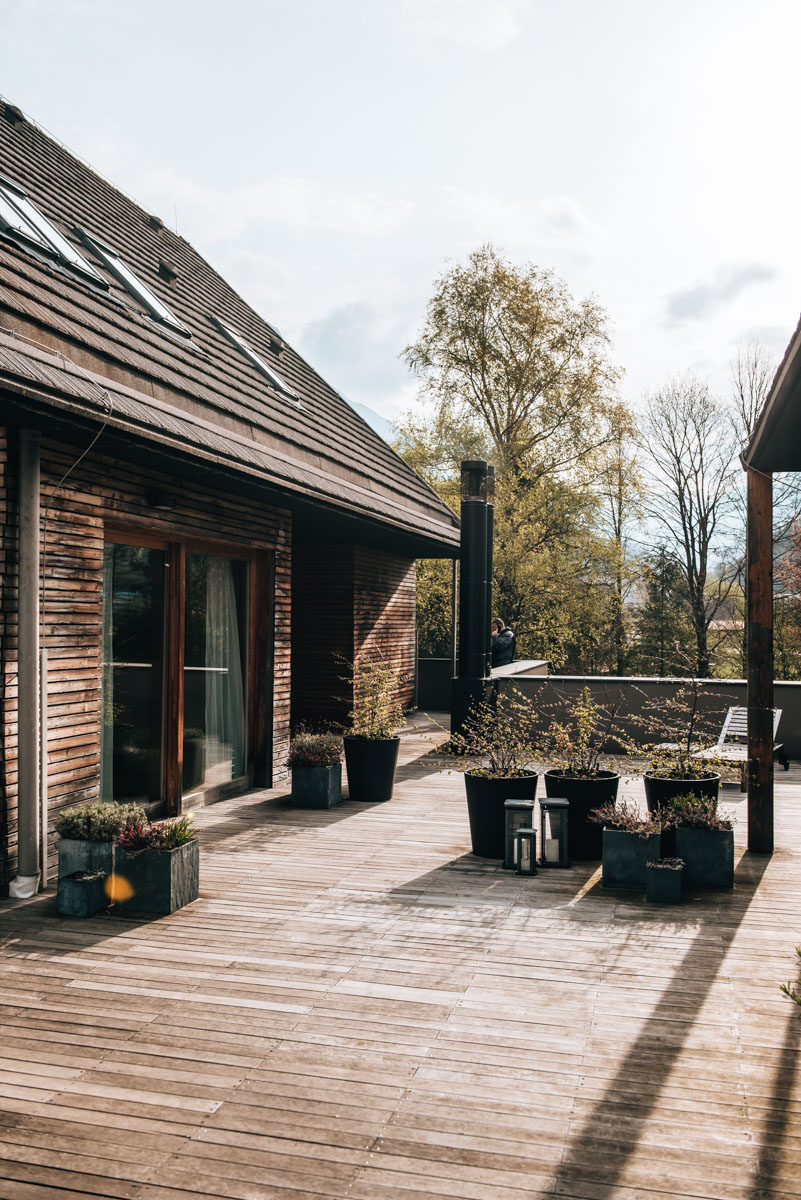 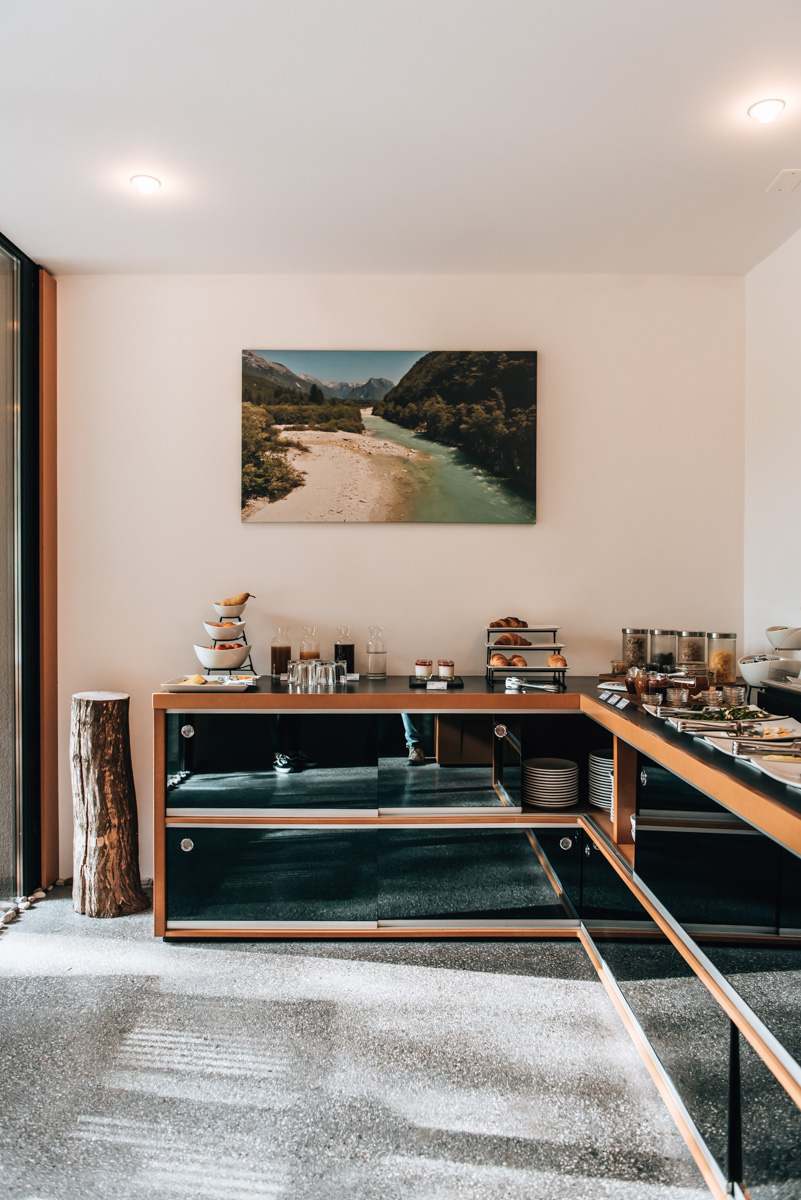 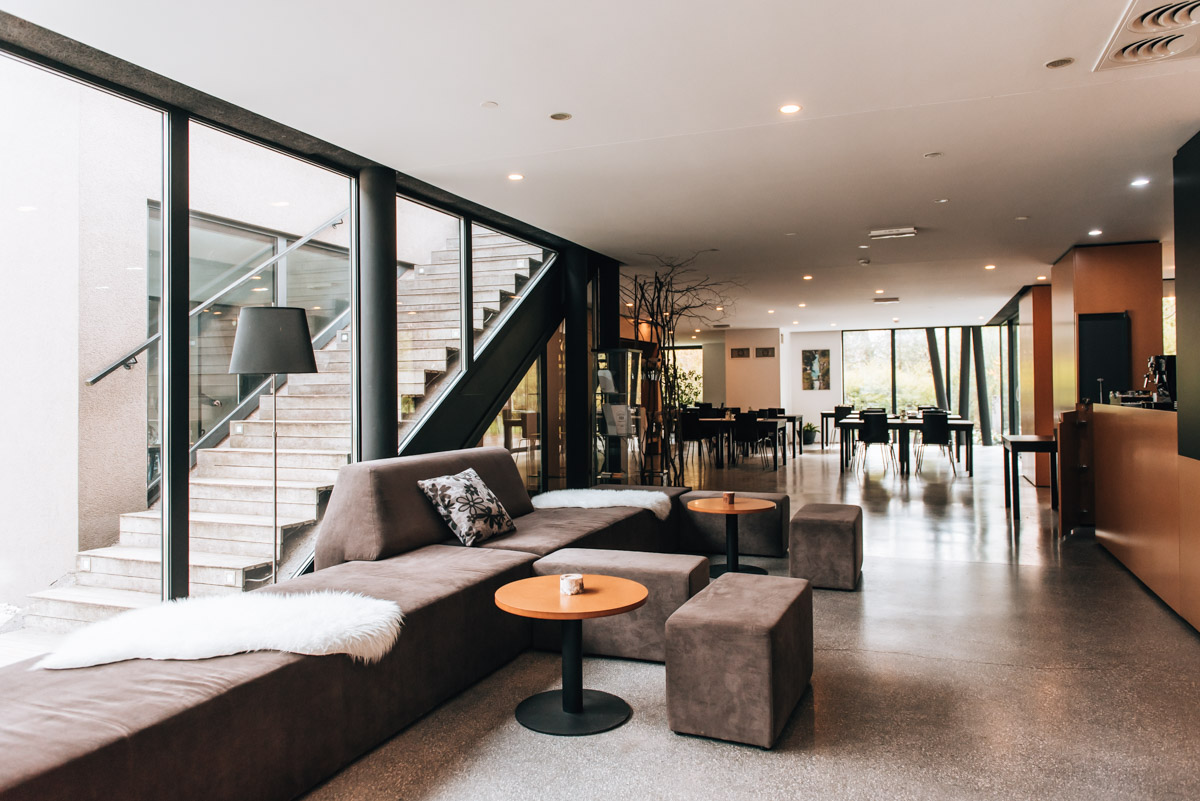 4. Map: Overview of the Best Spots in the Soča Valley

To help you get a better idea of where everything is, we have pinned the best spots of the Soča Valley region (as mentioned in this article) on the map below.

This blog article contains our personal recommendations in the form of so-called affiliate links. If you book or buy something through these links, we will get a small commission. However, this does not change the price for you at all. A million thanks from the both of us!

Have you ever done a trip to the Soča Valley? Which places did you like the most? We look forward to your comment with your tips and recommendations.