Graz Travel Guide: Things to do and see

by Sommertage
in Austria, Blog, Europe

Have you ever considered a weekend trip to the second largest city in Austria? Most people know Graz as a young, hip university town. But Graz is so much more than that! The capital of the Styria Province has a really charming, maze-like Old Town and one of the most photogenic landmarks of Graz is the Clock Tower.

We feel like Graz offers a unique atmosphere of its own, different to that of Vienna and Salzburg, therefore, we can highly recommend a trip to Graz. In this blog article, we will show you the most beautiful sights and our personal highlights in Graz.

1. Exploring Graz: What to Expect

Graz is neither as imperially magnificent as Vienna nor as photogenic as Salzburg. But that does not matter, because Graz has its own charms. The capital of the Styrian Province is a young, urban student city with a wide range of art and culture. Many years ago, Graz was once the European Capital of Culture and fortunately the reputation of being a ‘Cultural City’ still lives on.

Graz is especially beautiful during spring and summer. This is when the city gives off a warm Mediterranean flair. You’re probably wondering how much time you should plan to stay and explore Graz? Although the Old Town of Graz is relatively easy to get around and quickly explored, you can effortlessly fill a weekend with some great activities. If you don’t have much time, then you can also see the most important sights in one day. 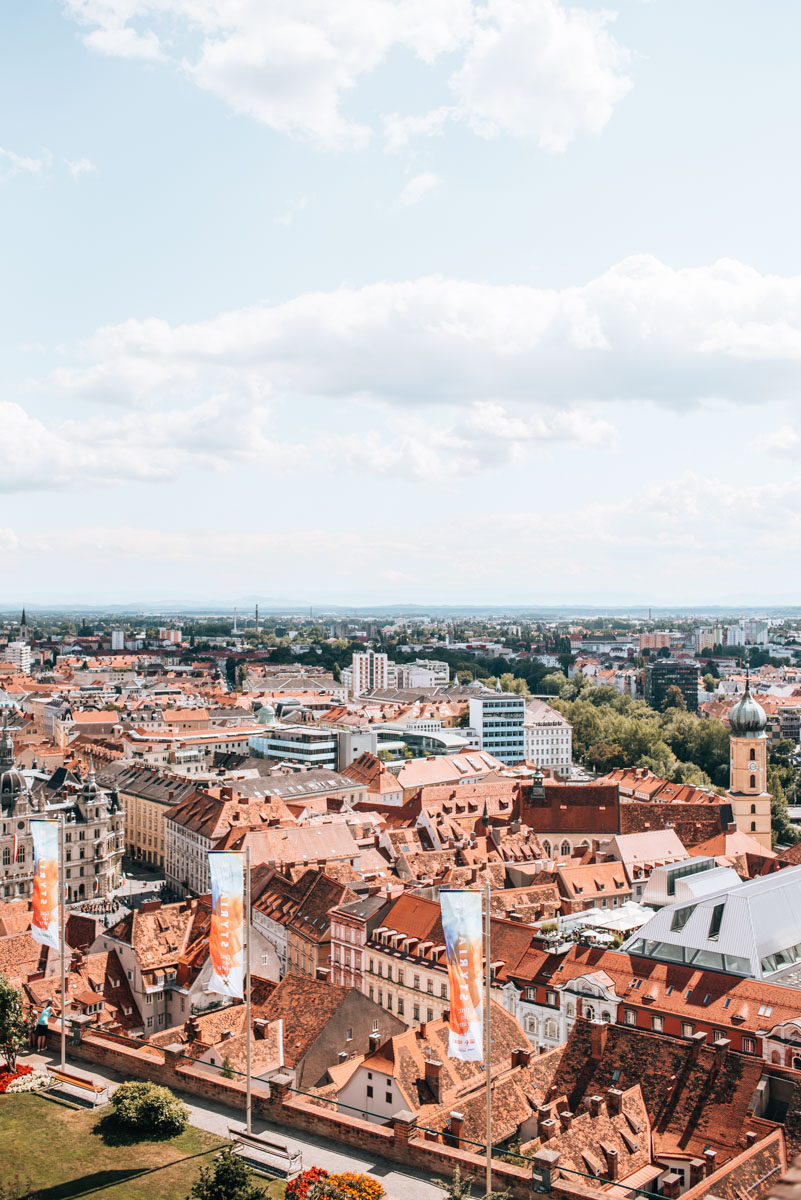 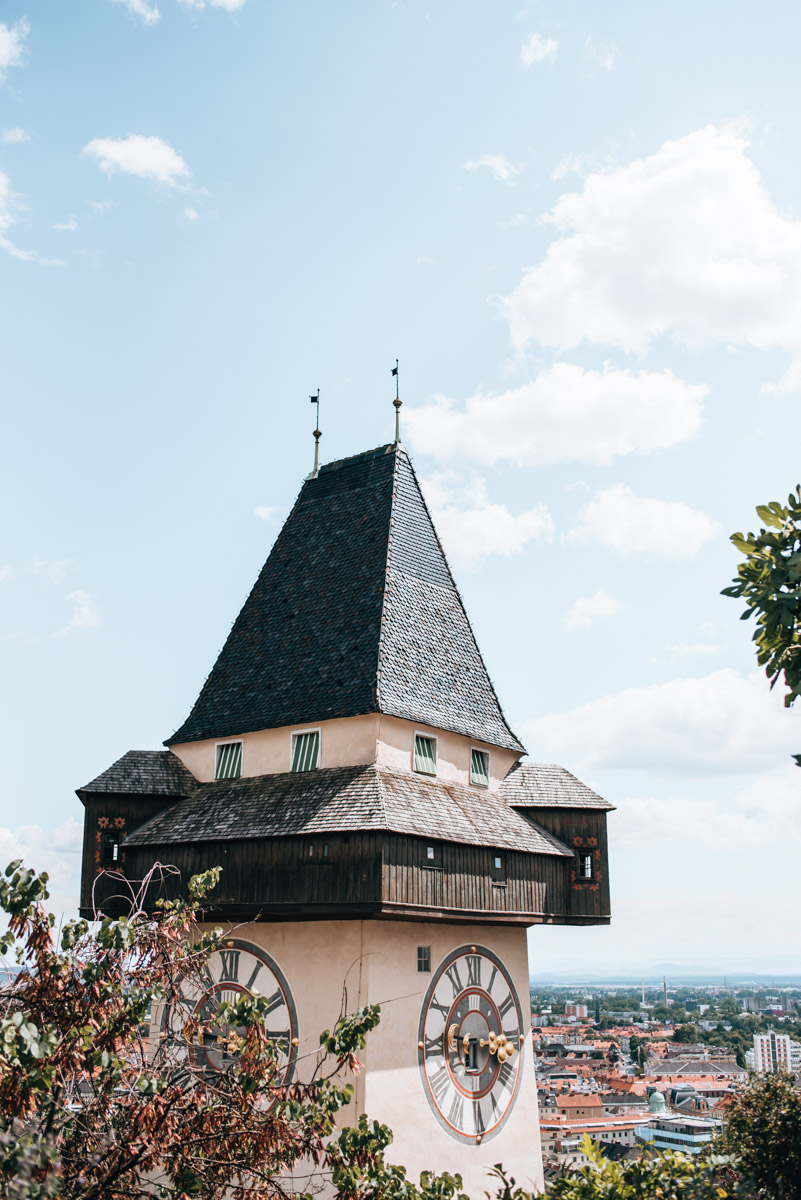 2. Things to do and see in Graz

Good news: the most important sights in Graz are all within walking distance, so you can leave your car in the hotel garage during a city trip to Graz. One exception: for more distant destinations, such as to the Schloss Eggenberg (Castle), then perhaps a car would come in handy. Otherwise, you can also reach these destinations quite easily by tram.

You are best to start your tour of Graz in the heart of the city: the Hauptplatz (or Main Square), which is located in the middle of the Old Town. Due to the amount of tram traffic and abundance of food stalls, this place does not really showcase its beauty to the fullest potential. Nevertheless, the main square of Graz is well worth seeing.

The most eye-catching and beautiful building on the Main Square is the Rathaus (Town Hall), where we let our eyes admire the impressive building. But the other Baroque style and Biedermeier houses on the Main Square are also equally beautiful to look at. The ensemble of buildings here just looks very harmonious and fits really well together.

From the Hauptplatz (Main Square) you can walk along the Herrengasse, which is the main shopping street in the centre of Graz. There are some beautiful buildings located along this promenade. After a short walk, you will reach the so-called “Gemaltes Haus” (also called Herzogshof, or Painted House in English), which is known for its painted front. Another building worth seeing in Herrengasse is the Grazer Landhaus: The inner courtyard of this Renaissance building is very impressive. 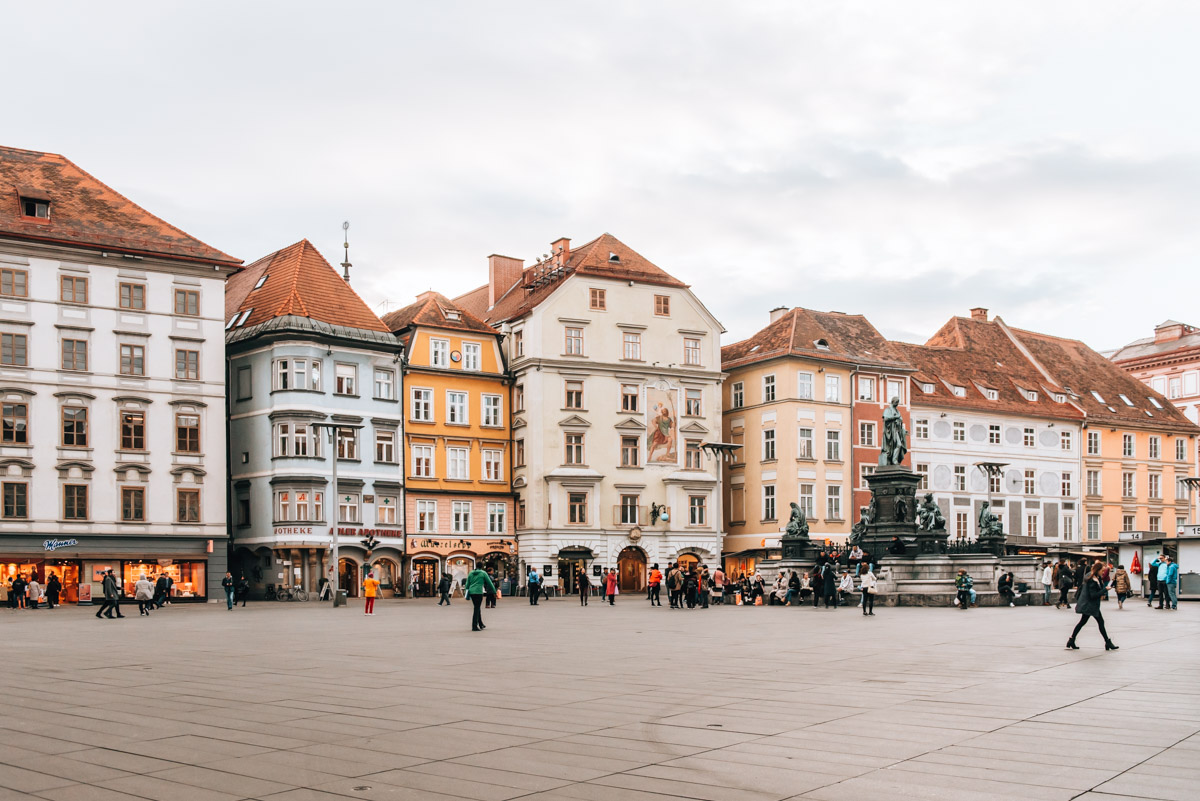 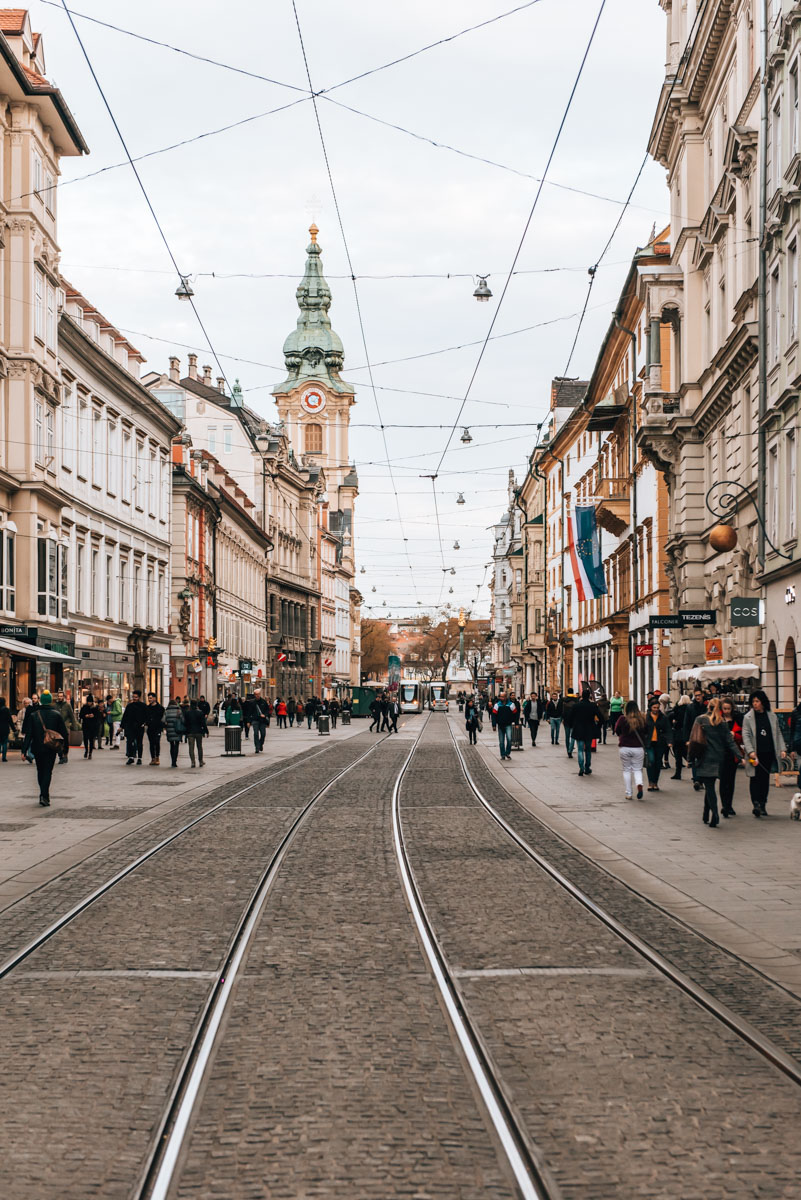 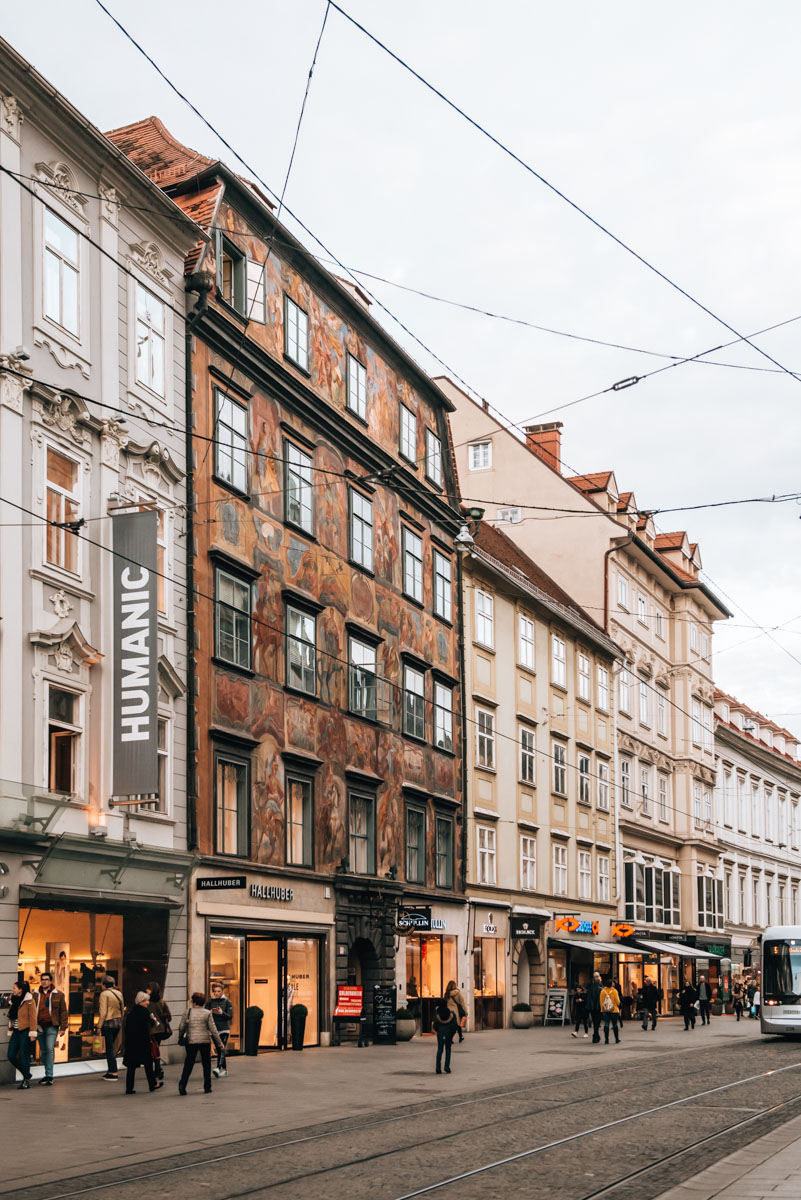 Unofficial Rule: You simply cannot leave Graz without walking around the Schlossberg and up to its Clock Tower. The Clock Tower is quite prominently the landmark of Graz, as it towers over the city and is visible from many corners of Graz.

From the Old Town you can easily reach the Clock Tower in about 15 minutes. You have two options: Either you take the stairs from the Felsensteig (260 steps), which starts on the Schlossbergplatz. Or, you can stroll through the several hiking trails in the park. For those who’d rather skip the exercise, there is the Schlossbergbahn (a funicular) or the glass Schlossberglift, which runs through the middle of the mountain.

We ourselves always choose to walk the footpath and we never regret it, because the short strenuous climb rewards you with a wonderful panoramic views over Graz. Sunset is probably the most beautiful time to come up here as the sun sets almost perfectly behind the city.

New Tip: As of February 2019, the Schlossberg is now officially home to the highest indoor slide in the world. In total, the slide lasts about 40 seconds and you can only reach the start point via the Schlossberglift (combined ticket 5 Euro). Needless to say, we will certainly keep this in mind for our next trip to Graz.

Getting to the Schlossberg: 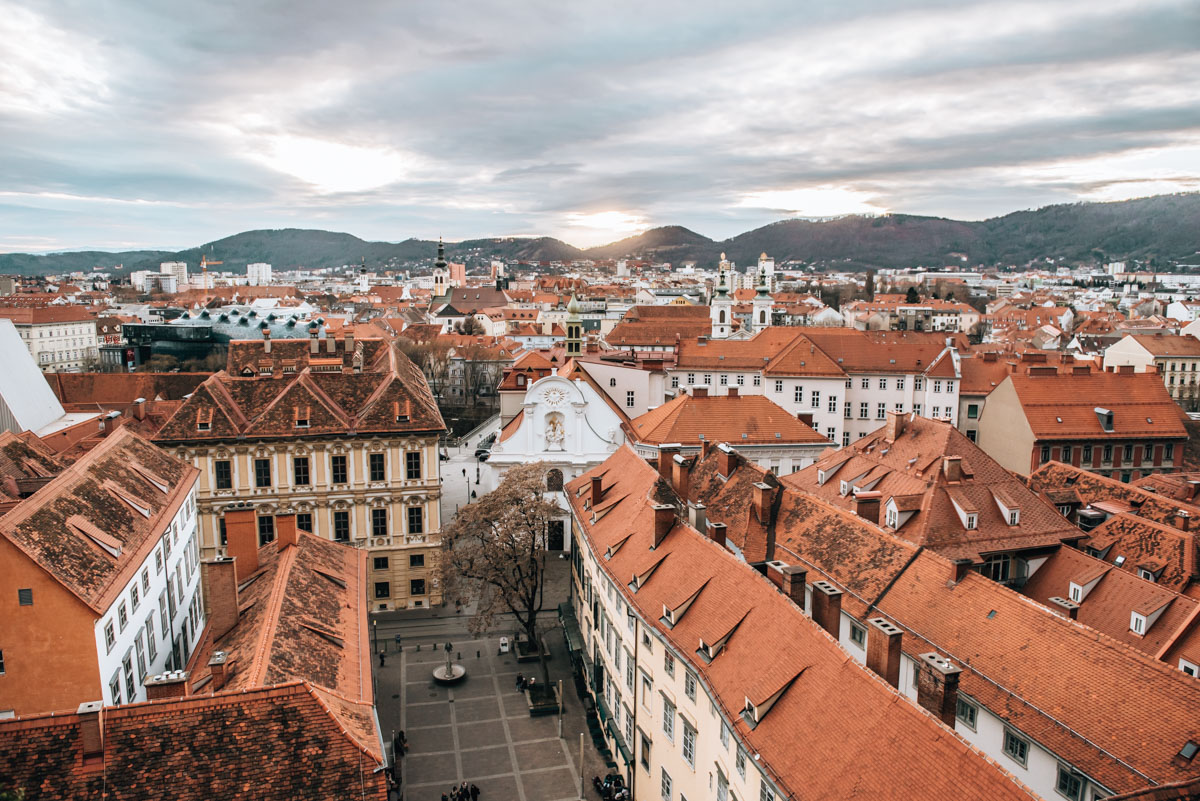 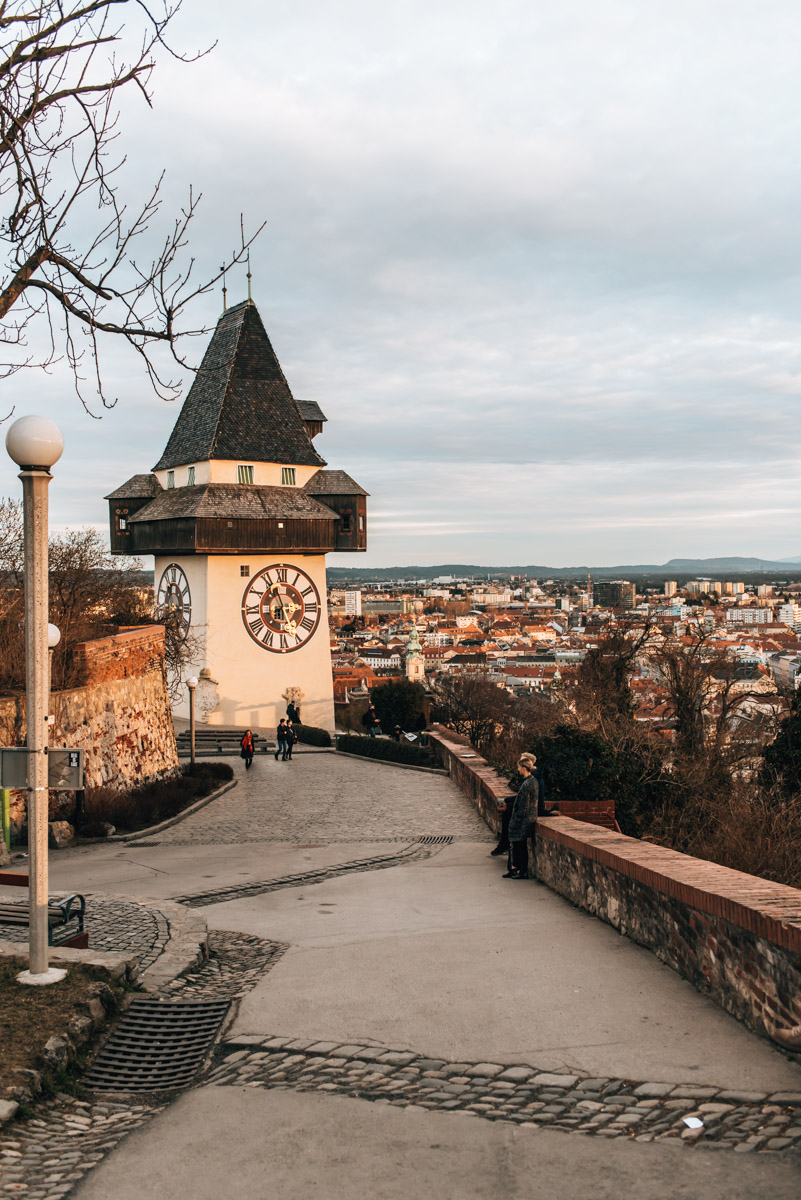 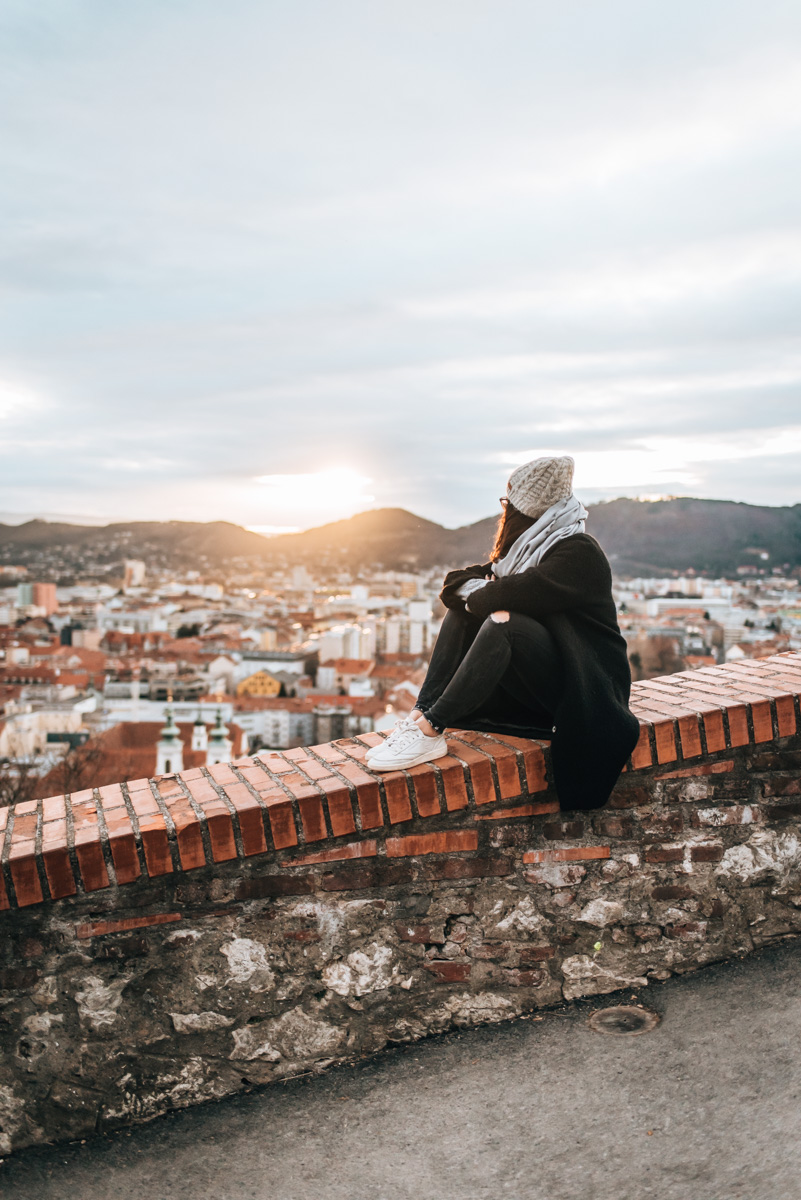 An island in the middle of the river? That’s right: The so-called Murinsel was built when Graz was the Cultural Capital several years ago. The shell-shaped platform “floats” on the Mur river and houses a small café. The Murinsel is accessible from both sides of the Mur river via a platform, which can also be used as a bridge to cross to the other side.

Although the Murinsel is not one of the greatest highlights of Graz, it’s worth coming here and seeing this bizarre building with your own eyes. Good to know: the island becomes well lit at night. 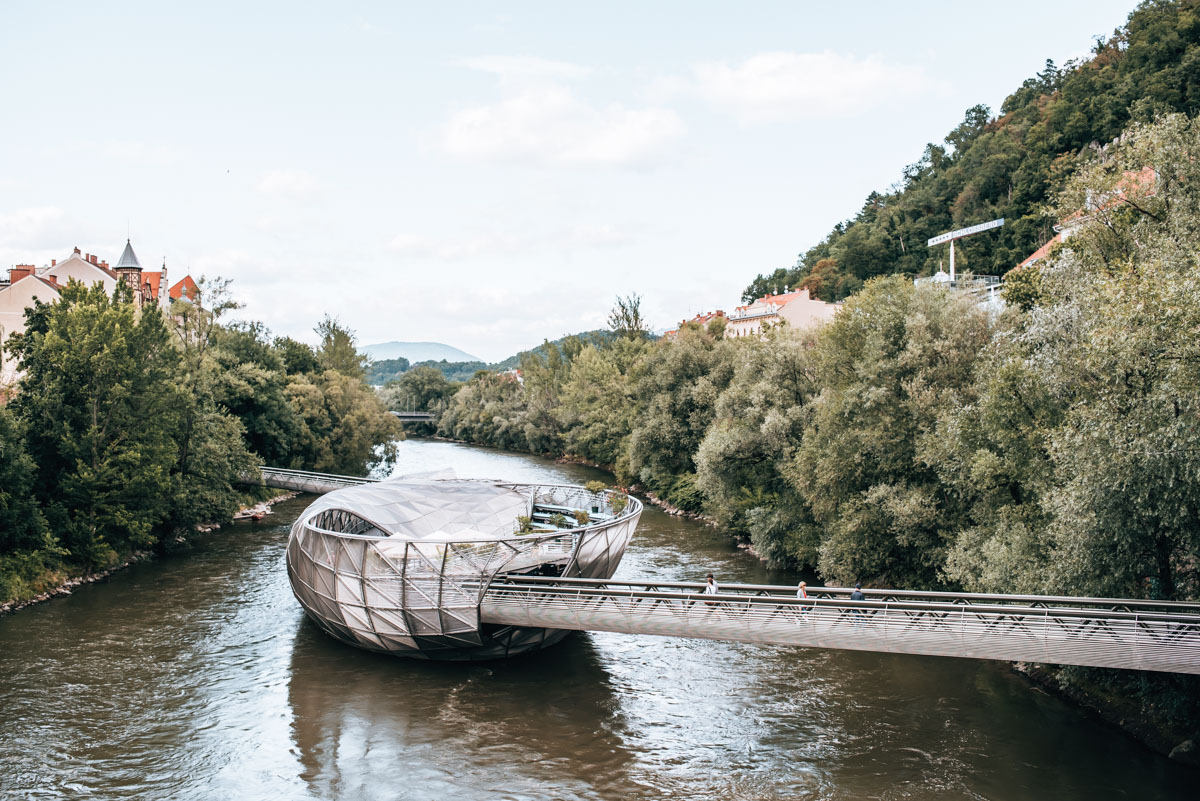 The most futuristic building in Graz is clearly the Kunsthaus. It is considered a modern landmark of the city and personally resembles that of a spaceship to us. The architect had the intention that the shape of the Kunsthaus should deliberately stand out from the red roof cityscape of Graz. No doubt, he has certainly succeeded.

The Graz Kunsthaus hosts many international exhibitions. Since there are no permanent exhibitions, it really depends on what kind of exhibition they are hosting at the time and your own personal taste, as to whether or not a visit to the Kunsthaus is worthwhile. 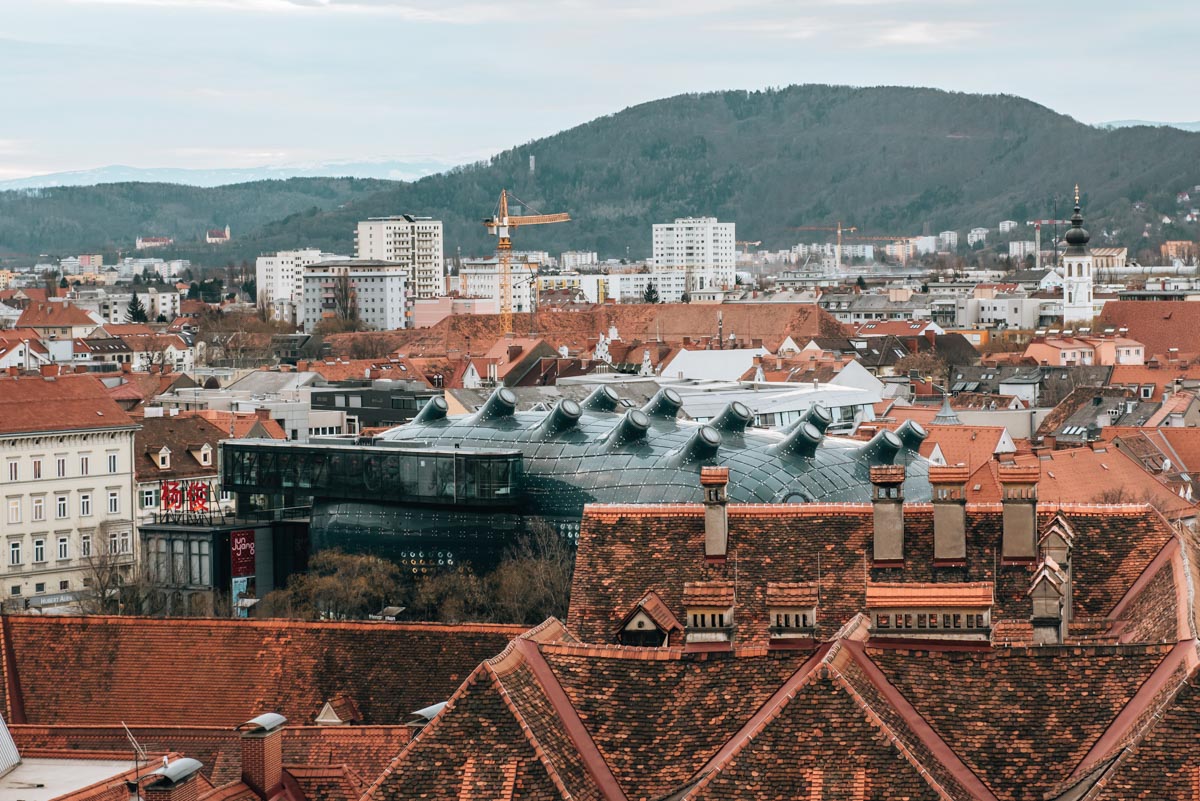 The Lendplatz is not necessarily a place most tourists will visit, but is rather popular amongst the locals and considered a secret tip. There is a farmer’s market here every day except for Sundays, from about 6am in the morning. There are many local and regional delicacies for sale at the stalls.

Our tip: Lendplatz has a number of permanent eateries, including “Die Süße Luise”. This small café is a nice place for breakfast during the warmer months. 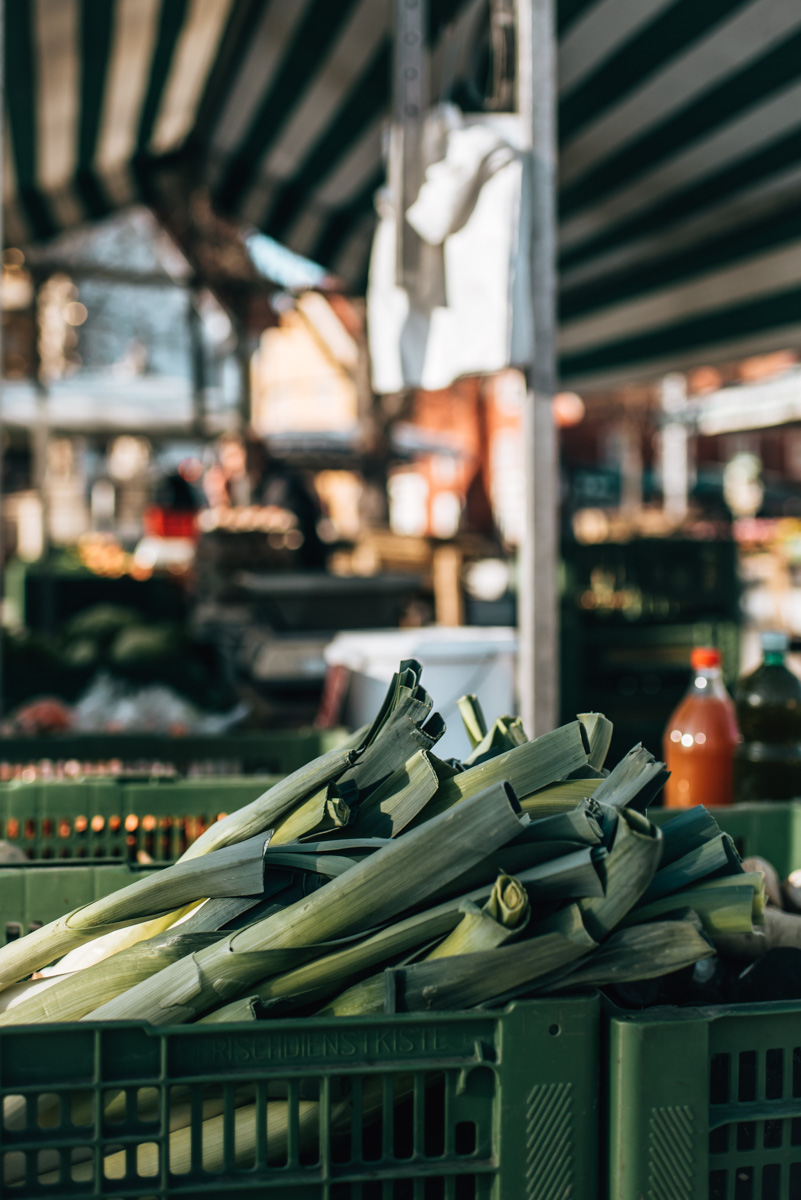 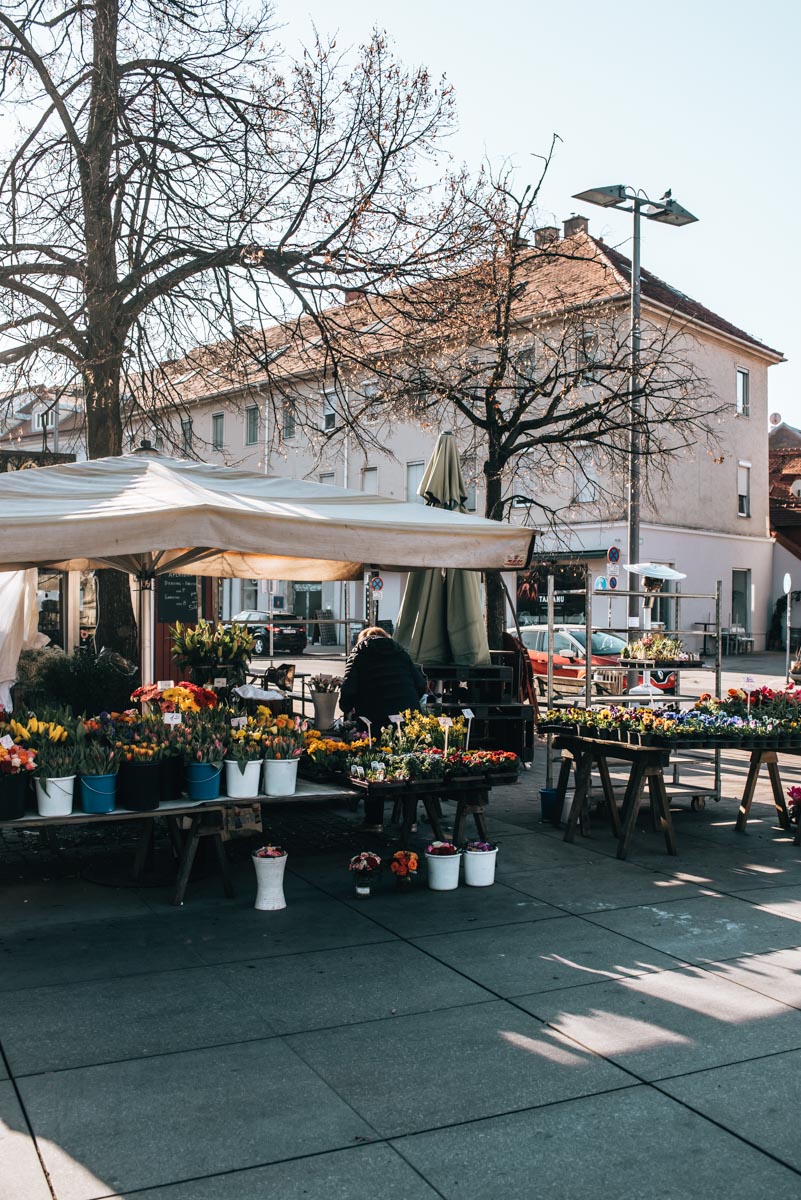 Just outside the centre, to the west of Graz, is the most important Baroque Castle in Styria: Schloss Eggenberg – which dates back to the 17th century. An interesting fact about the history of the building: The  castle structure was designed according to a number symbolism. For example, the castle has exactly 365 exterior windows, which corresponds to 365 days a year.

Schloss Eggenberg is located in a large park that attracts not only tourists but is also used by locals for long walks. It probably won’t take long before you come across one of the park’s friendly peacocks.

The Prunkräume (State Rooms) can only be visited as part of a guided tour. We ourselves were there in February, but the rooms were unfortunately closed for the winter break. However, we still think that a visit to Schloss Eggenberg is worthwhile, with or without a guide.

Information about visiting the Schloss Eggenberg:

Admission: 2 Euros for the Castle Park (open all year round). The Prunkräume (State Rooms) costs 15 Euros – it is only accessible as part of a guided tour and only open between April and October.
Address: Eggenberger Allee 90, 8020 Graz
Getting there: either by car (parking available) or by Tram Line 1 (Schloss Eggenberg Stop) or Line 7 (Franz-Steiner-Gasse Stop) 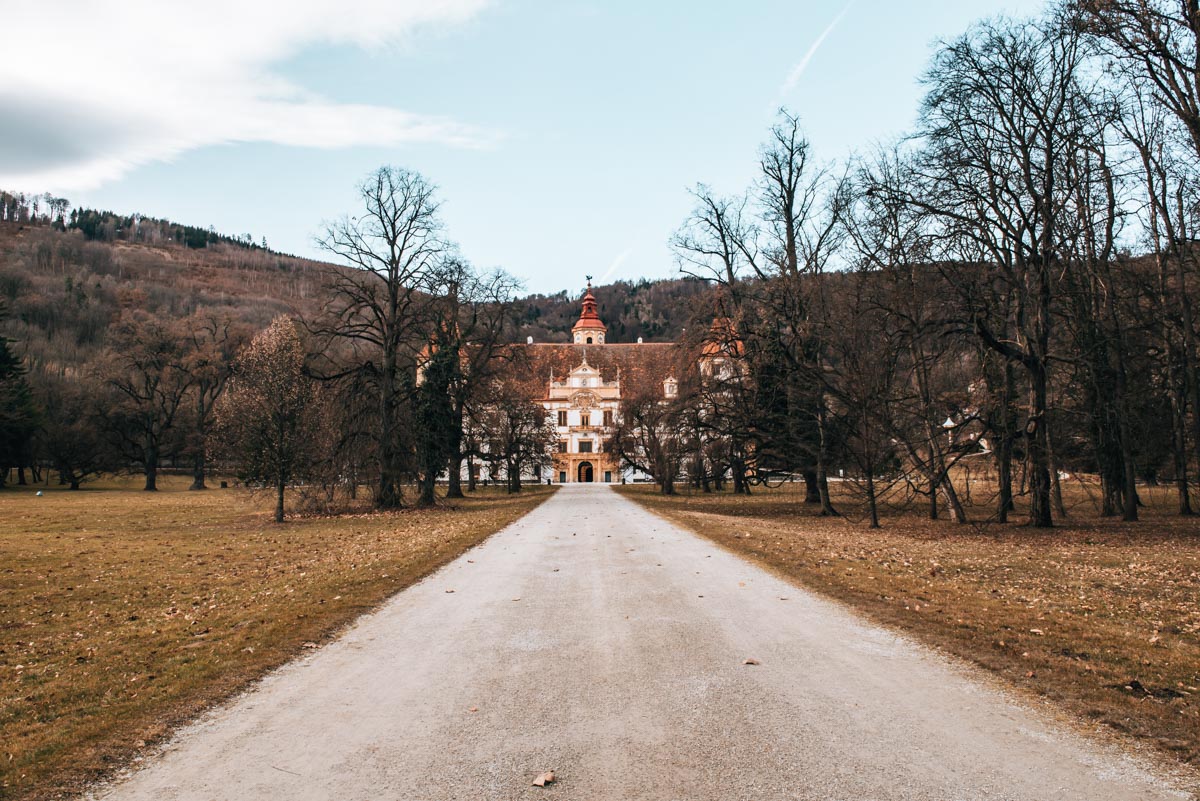 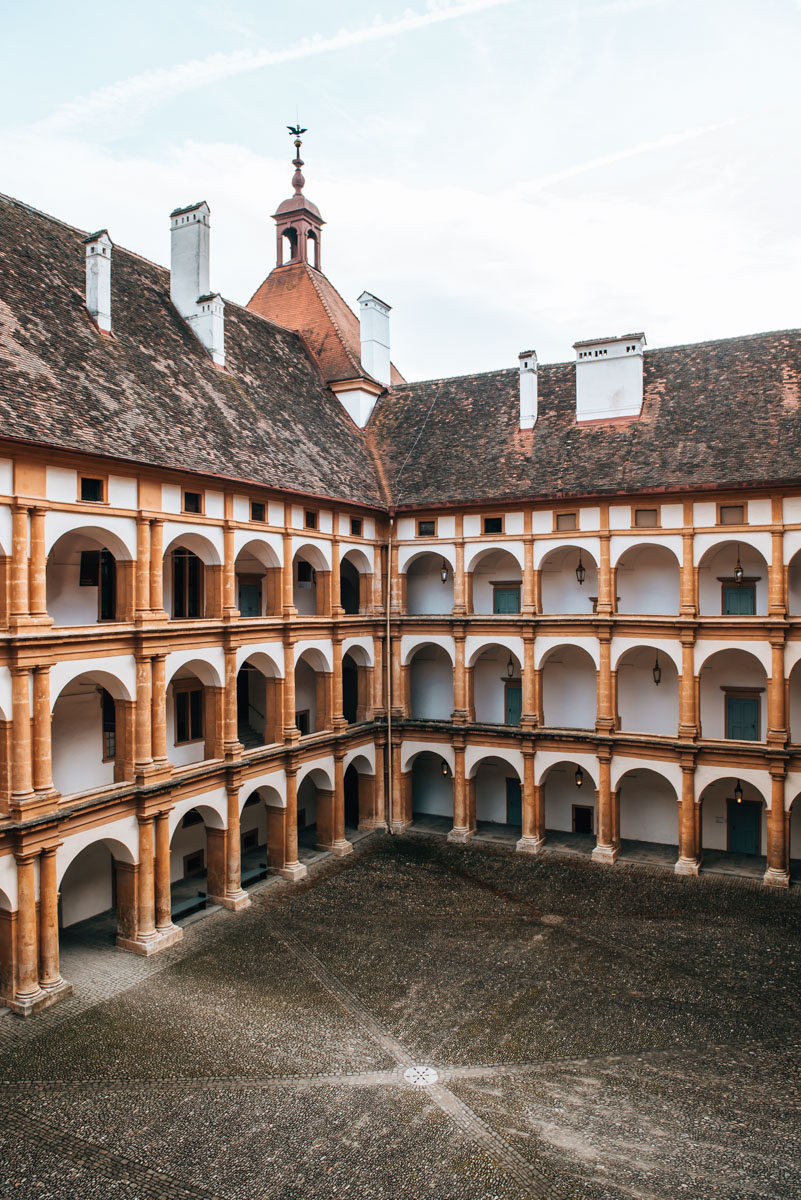 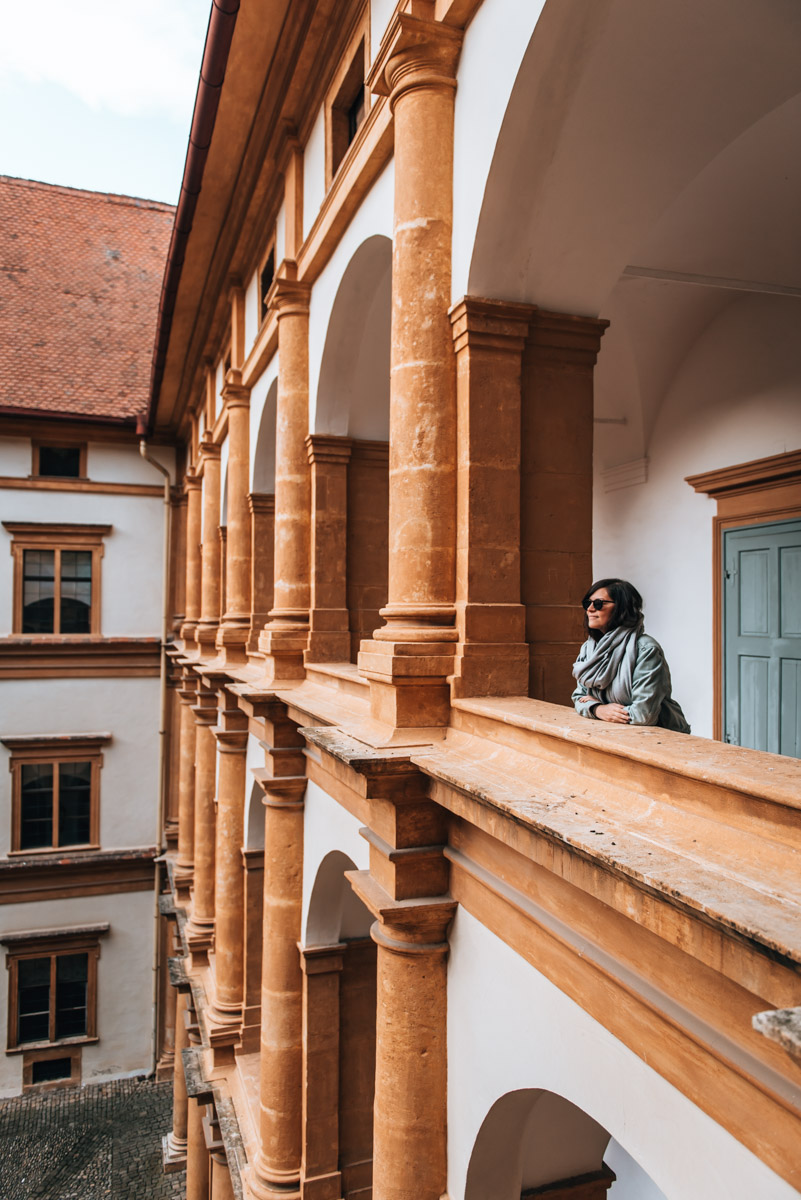 3. Our favourite Restaurants and Cafes in Graz

This Café is one of the most hipster cafes in Graz and is definitely worth a stopover. We came here for breakfast and found the selection reasonable. The food was delicious and the coffee – excellent.

The upholstery is very comfortable and during the warmer months you can drink your coffee outside in the Schanigarten (outdoor terrace). 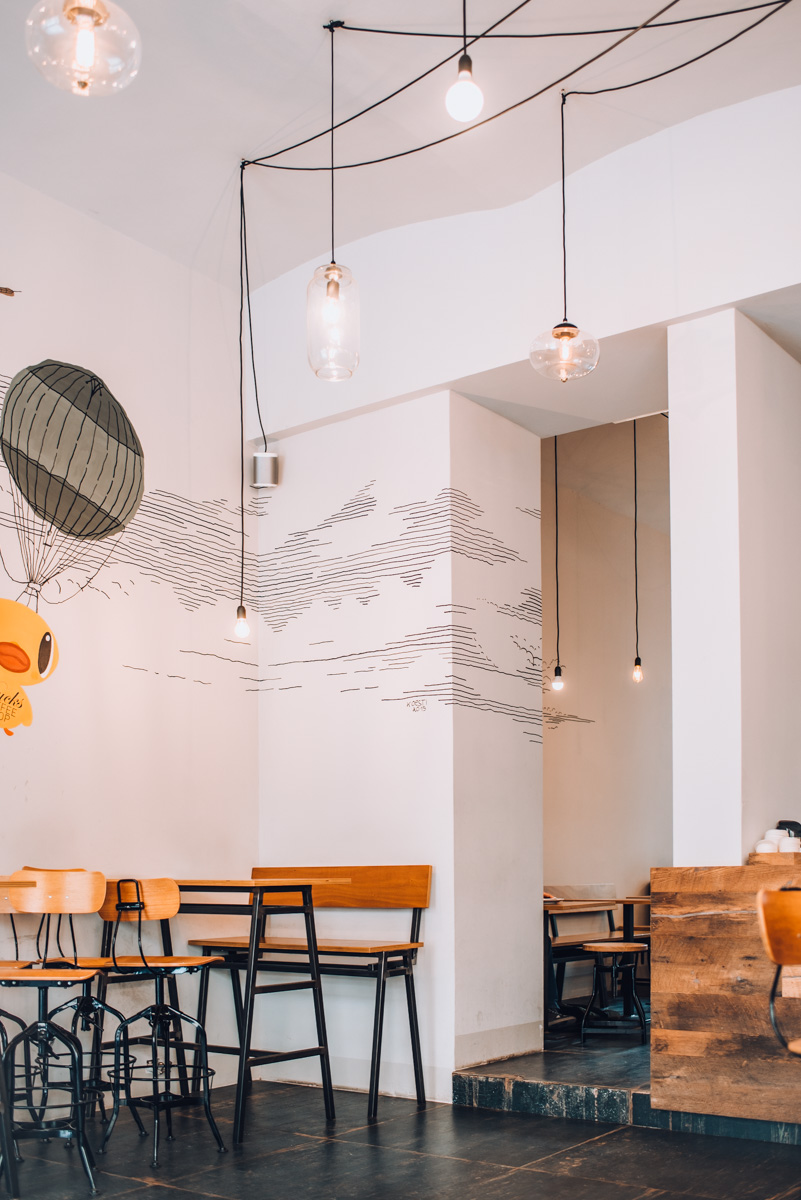 The Freiblick Tagescafé is probably the best place for an Aperitivo with a view. It is located on the last floor of the well-known Kastner & Öhler Department Store. Personally, we did not find the interior atmosphere super great, but the outside terrace is fantastic. 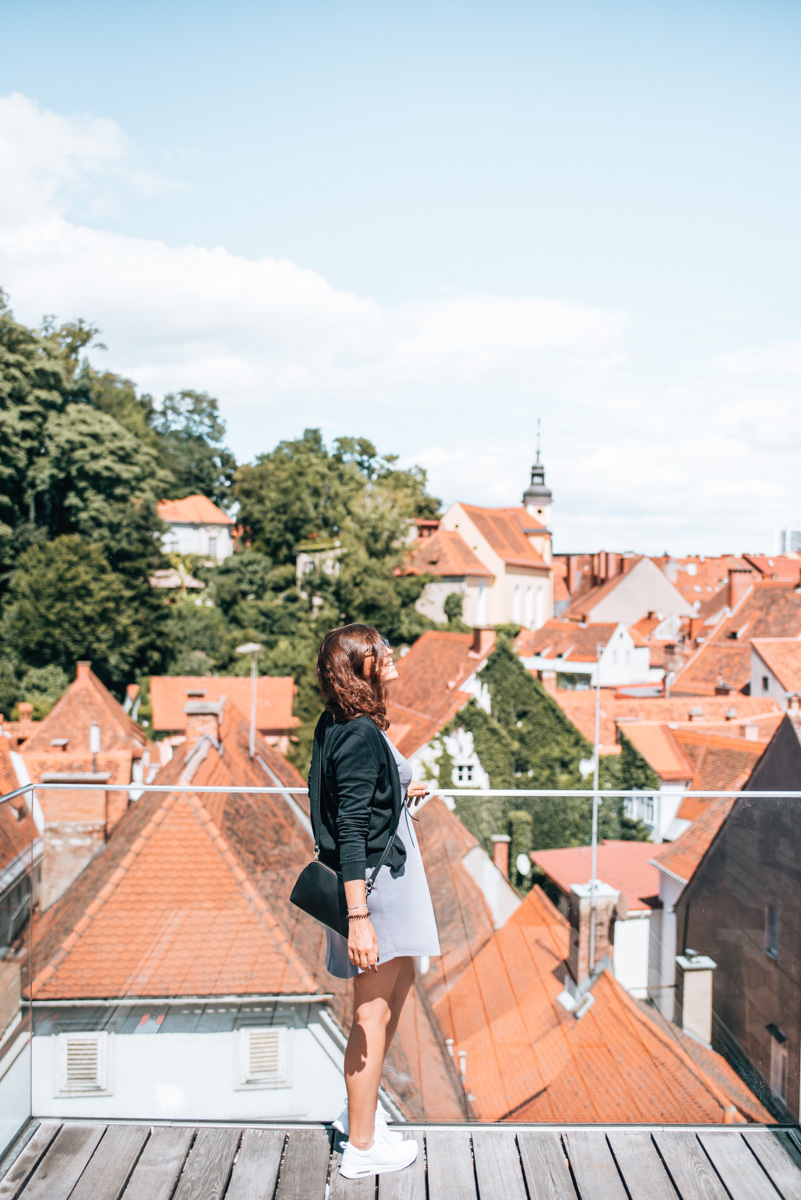 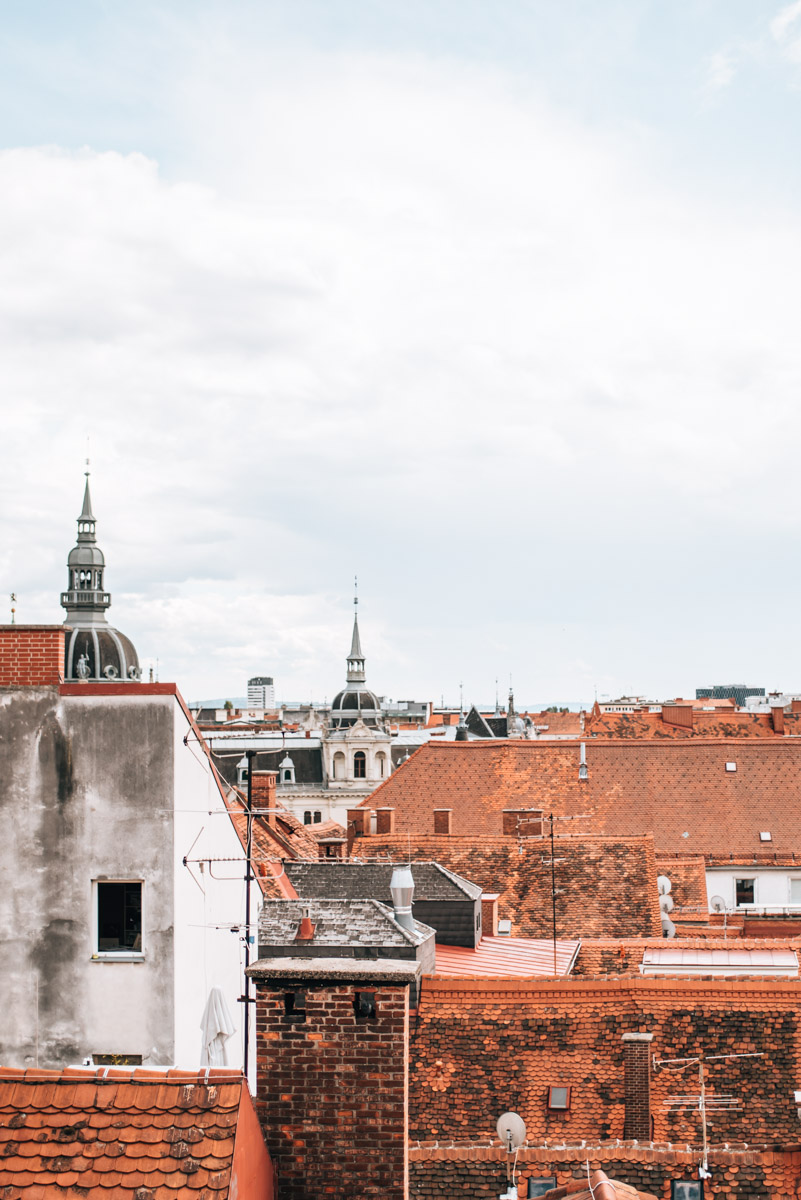 “Trink Besseren Kaffee” is the slogan – which translates to “Drink Better Coffee” in English. What can we say? The coffee here really does taste amazing. Tribeka has a total of four branches, all located in Graz. It’s the perfect place for a quick coffee break, and you can even treat yourself to a piece of cake or a Pastel de Nata.

Address: There are 4 branches in Graz, and 2 of them are very close to the city centre (Grieskai 2 or Kaiserfeldgasse 6) 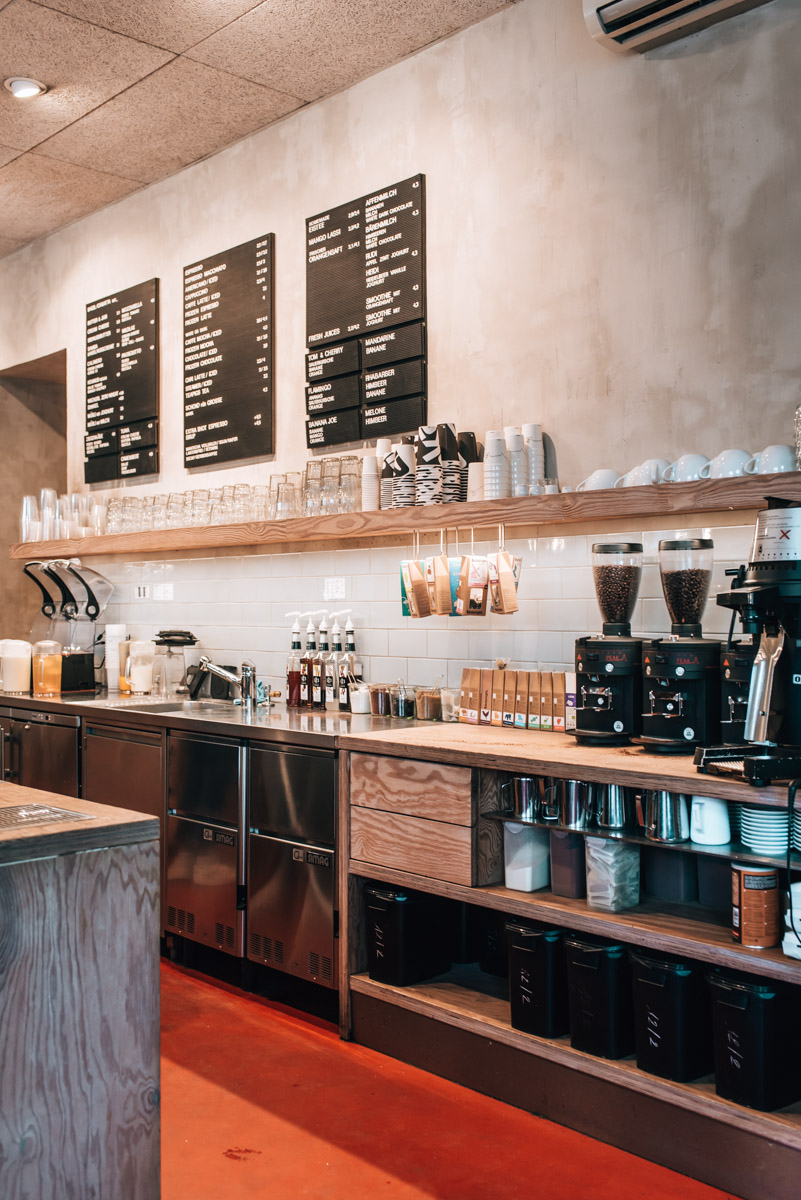 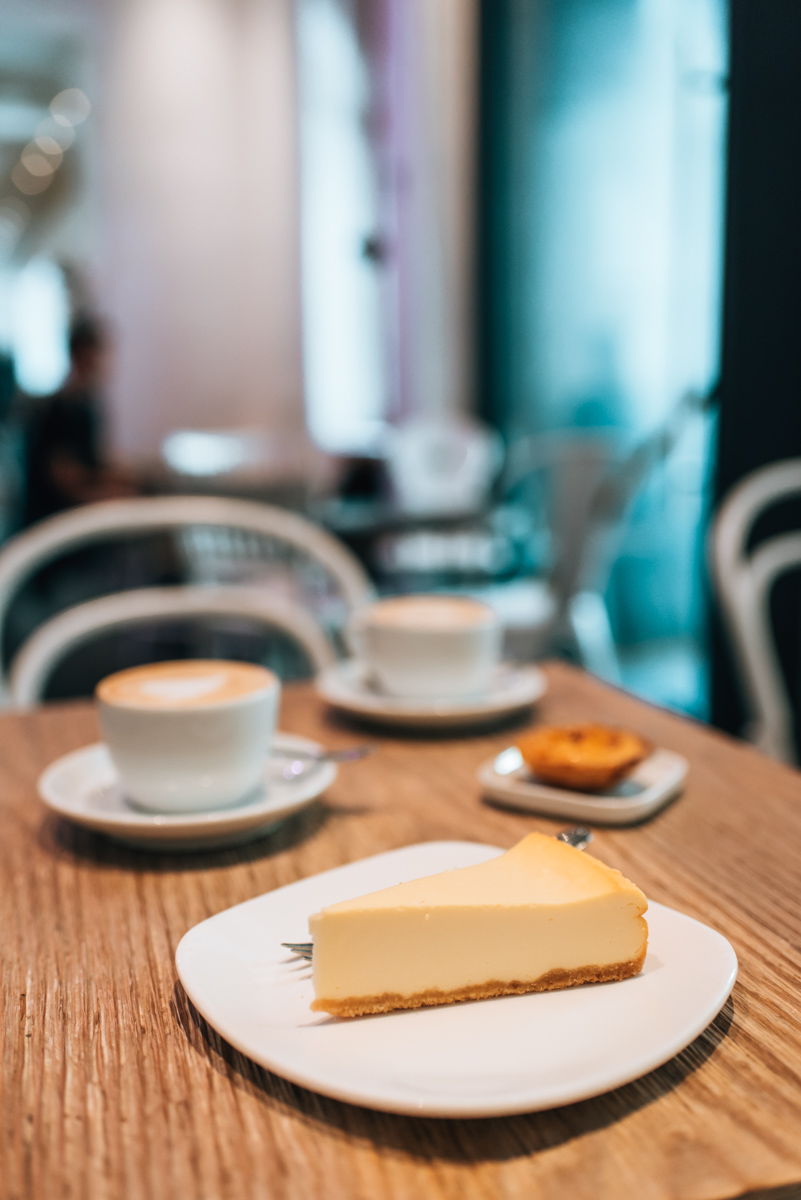 When we asked for tips on Instagram, there was no other pub recommended to us more than the Freigeist – so of course we had to stop by. And we were certainly not disappointed. Hands down the best burger we’ve had in a very long time. Despite only one vegetarian option, it was delicious.

The Freigeist is extremely popular and therefore can be quite full. We came during the week without a reservation and managed to just get a seat at the bar. 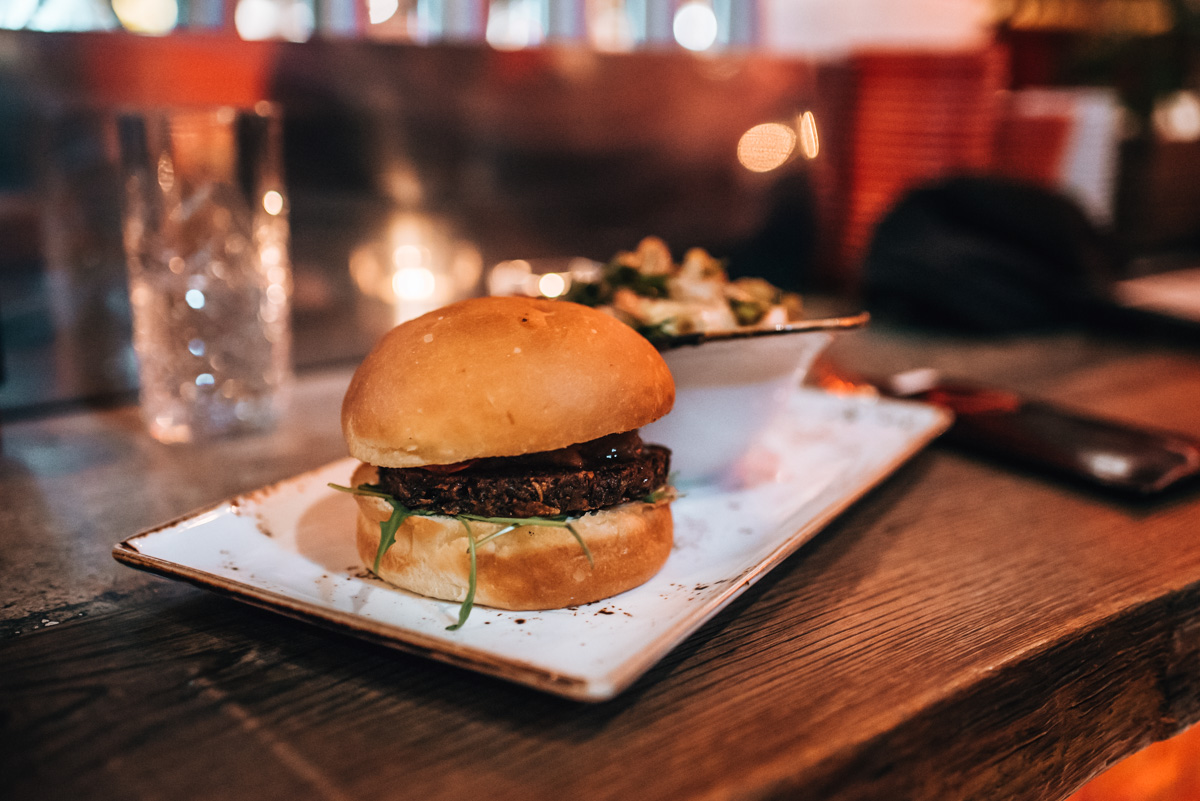 Tips for more cafes and restaurants in Graz

The selection of cafes and restaurants in Graz is huge and unfortunately we could not visit all the places we had on our list. However, we would still like to share with you some tips we received via Instagram. Maybe you’ll find some of these café or restaurant suggestions, suitable for you:

Blendend: Hip restaurant with a lounge-like atmosphere that offers a highly-praised brunch in the weekends.
Der Steirer: Modern, Styrian cuisine; great lunch menus during the week
Ginko Greenhouse: Vegan cafe with bowls, smoothies and everything you would expect at a hipster cafe.
Kunsthauscafé: We went for a quick drink in the evening here and enjoyed it very much. Apparently, the breakfast is also good.

4. Our Hotel Tips for Graz

On our most recent trip to Graz we stayed at the Grand Hôtel Wiesler, which we can highly recommend. The Hotel Wiesler is one of the hippest boutique hotels in Graz – The ambiance is young and stylish, but not too over done, the location of the hotel could hardly be more central.

The entire hotel is furnished with great attention to detail and derived its inspiration from many different styles. For example: The sinks in the rooms were acquired from Mexico. With regards to the rooms, the general theme tends to be quite purist and minimalistic. For some, the atmosphere may be a little too sterile, but the beds are super comfortable and that is the most important thing.

The beautiful free-standing bfath and city views are definitely the highlight here. Unfortunately, we did not get to test the breakfast, but it is supposedly very good and attracts even non-hotel guests. All in all: not the cheapest option in Graz, but one that is highly recommended.

You can view and book the hotel here: Grand Hôtel Wiesler 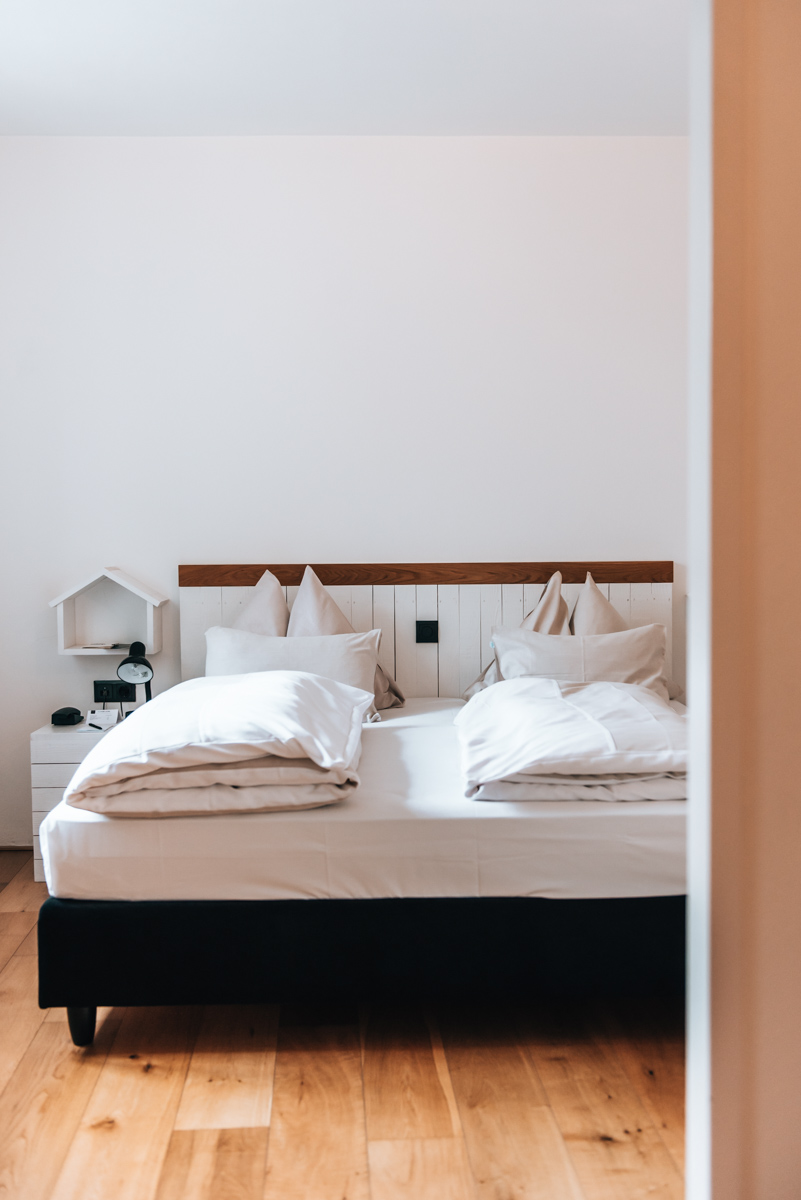 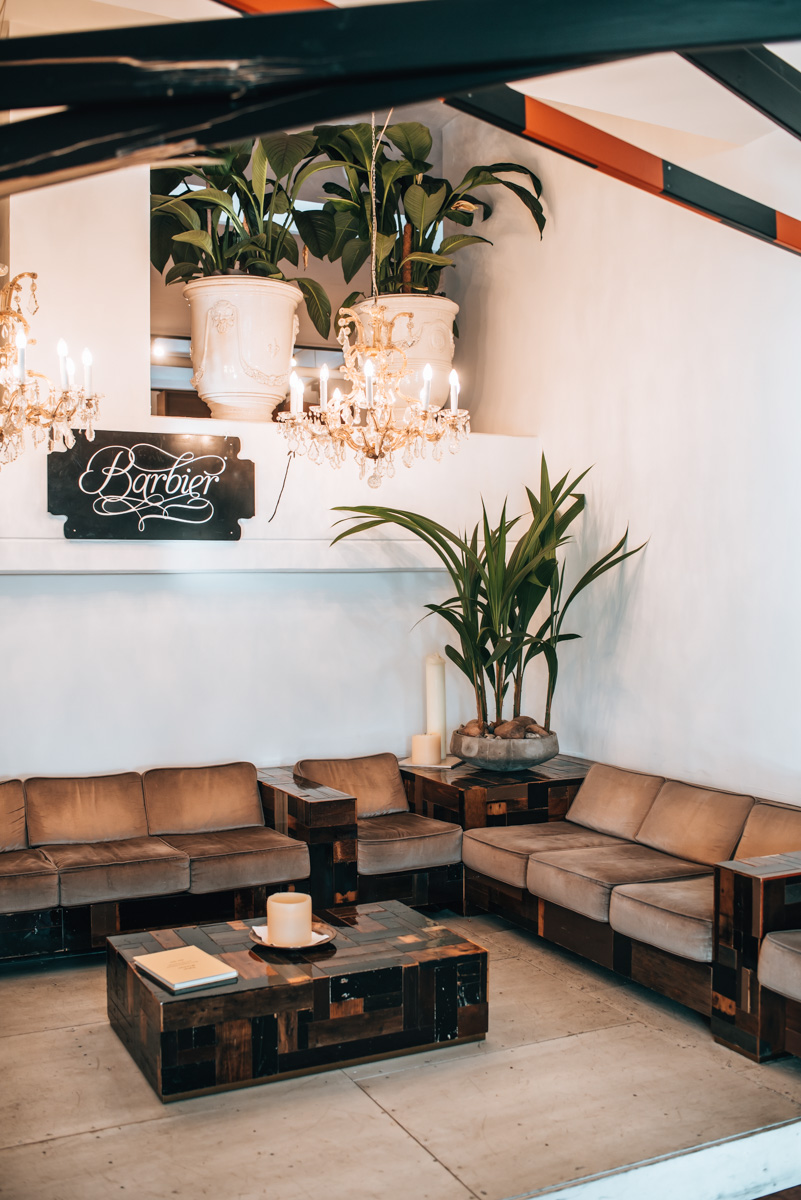 This blog article contains our personal recommendations in the form of so-called affiliate links. If you book or buy something through these links, we will receive a small commission. For you, this does not change the price at all. A million thanks from the both of us!

Have you ever been to Graz? Do you have any more tips or reviews? We look forward to your comments!