Tokyo from above: Best Viewoints and Rooftop Bars

by Sommertage
in Asia, Blog, Japan

Megacity metropolis Tokyo. There is no other city in the world that has more inhabitants than in Tokyo: 9.5 million in the urban area, and 37.5 million in the metropolitan area. Mind blowing or what? A trip to Tokyo certainly wouldn’t be complete without venturing up some high places and seeing the gigantic concrete jungle from above.

Tokyo boasts a huge variety of viewing platforms – not that this comes at a surprise. Some at dizzying heights, some for free, some outdoors, and others in a bar: the options are seemingly endless. 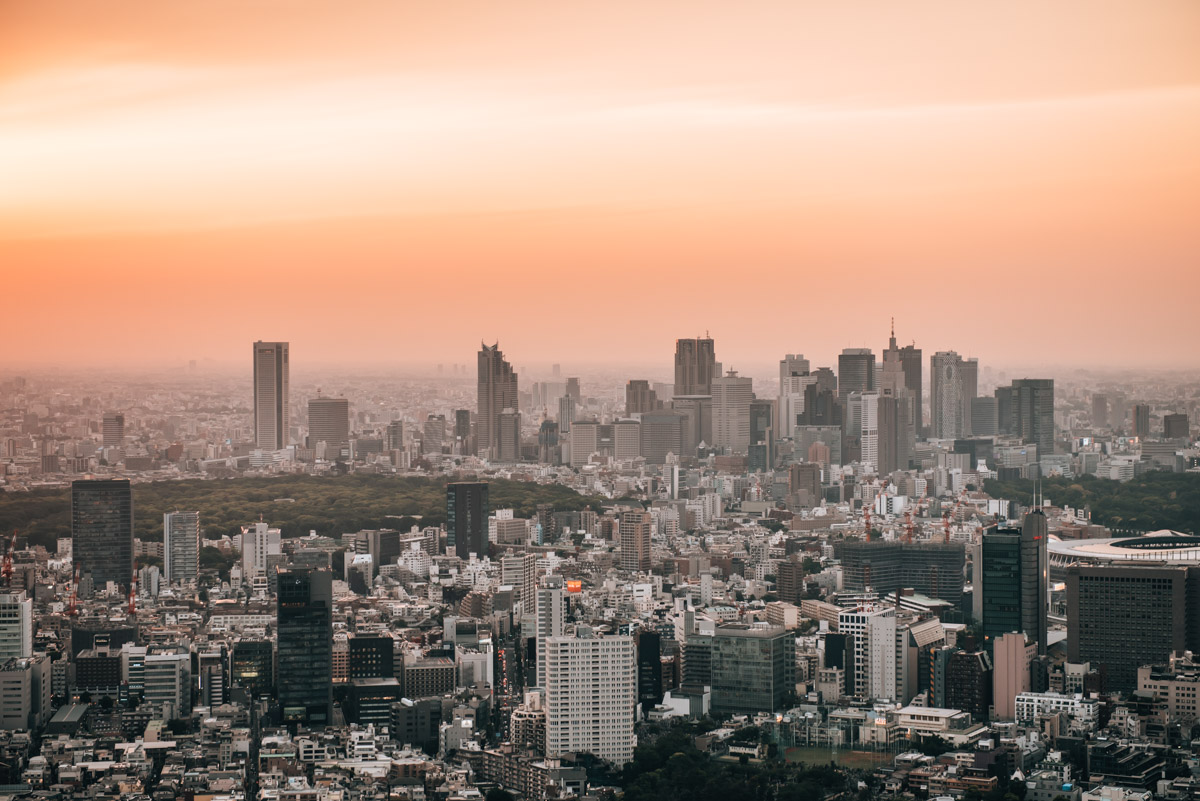 One of the best views of Tokyo is from the Mori Tower rooftop, located in the Roppongi Hills complex – and officially called the ‘Tokyo City View’.

This observation deck has a huge advantage over all others: which is that the highest floor (aka. “Sky Deck”), is an outdoor platform. This means you can enjoy an unobstructed 360-degree view over Tokyo. Along with the helicopter landing pad, the vibes up here is really something special.

If you can make it in time, we would highly recommend you come for sunset. Unfortunately, the sun does not sink behind the Tokyo Tower, but on the other side, which is less spectacular – that would have been the icing on the cake. However, the view is stunning nevertheless. On a clear day, you can even see Fuji in the distance.

Our tip: bring an extra layer to wear, especially if you come in the evening, as the wind can be rather breezy up on the sky deck. With that in mind and for good reason, the Sky Deck is only open in good weather. During strong wind or rain, the Sky Deck is closed and people have to settle for the indoor observation deck a few floors below.

Information about visiting the viewing platform at the Mori Tower

How to get there: About a 5-minute walk away from the Roppongi Station (which you can get to via the Ōedo and Hibiya Lines).
Opening hours: 11 am – 8 pm, last admission is 30 minutes before closing
Entry Fee: 1,800 Yen for the Museum & Indoor Observation Deck + 500 Yen for the Rooftop Sky Deck 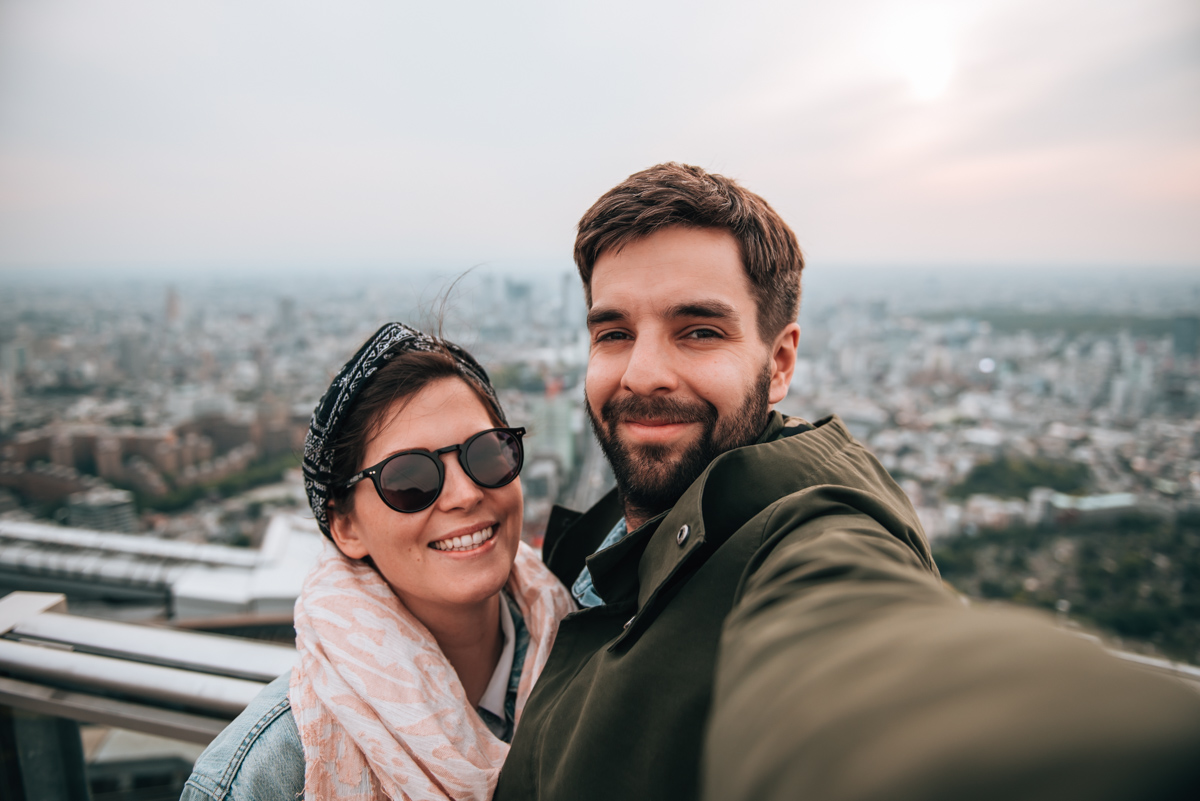 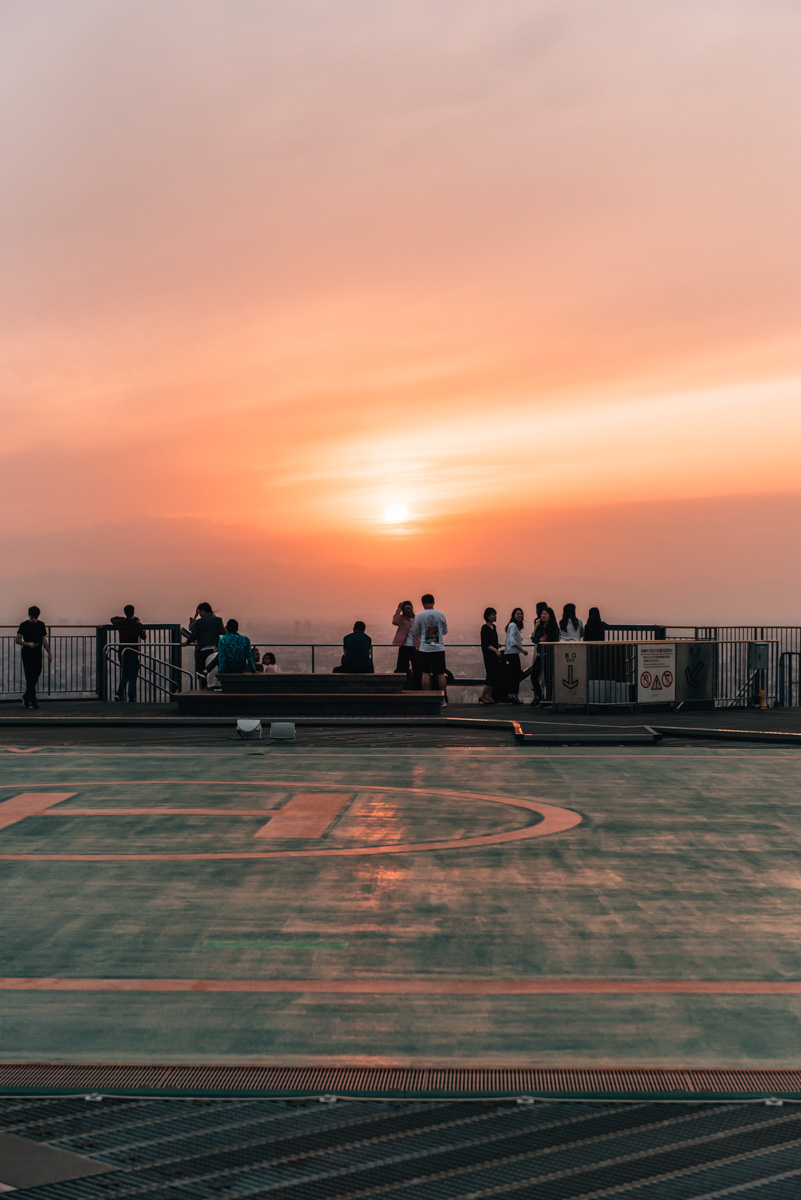 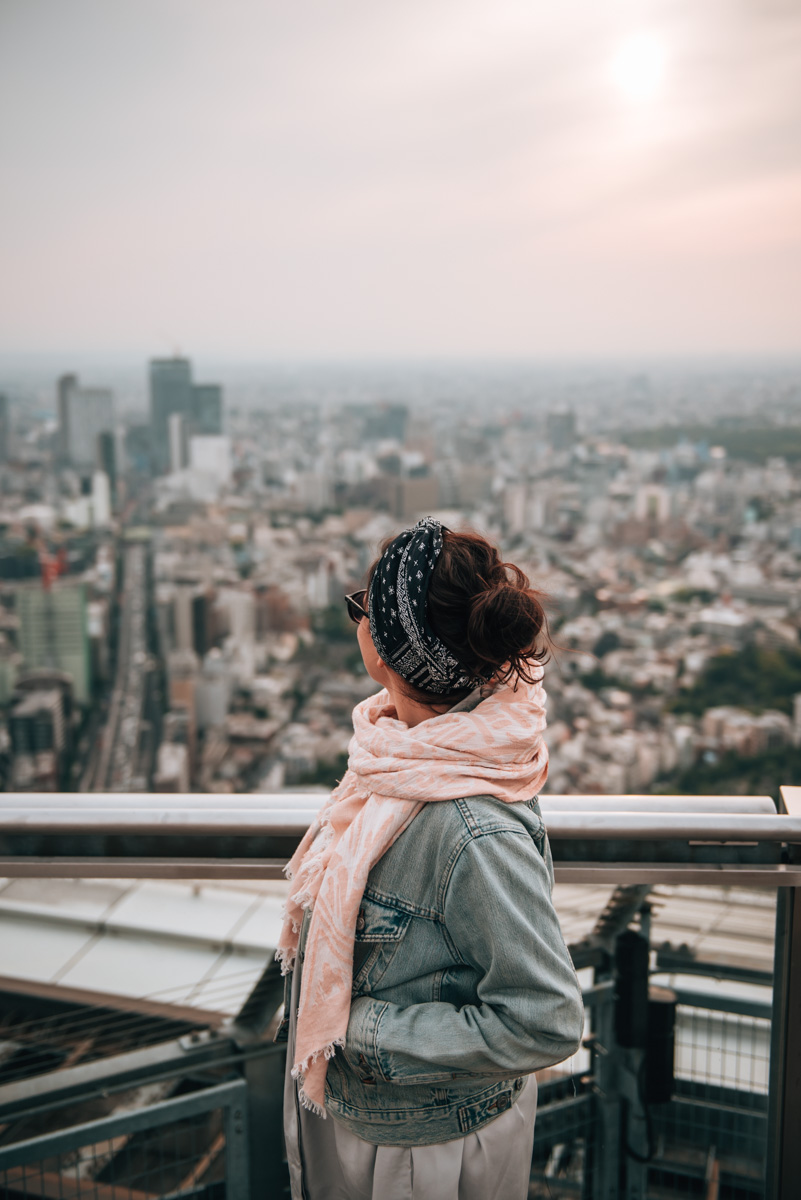 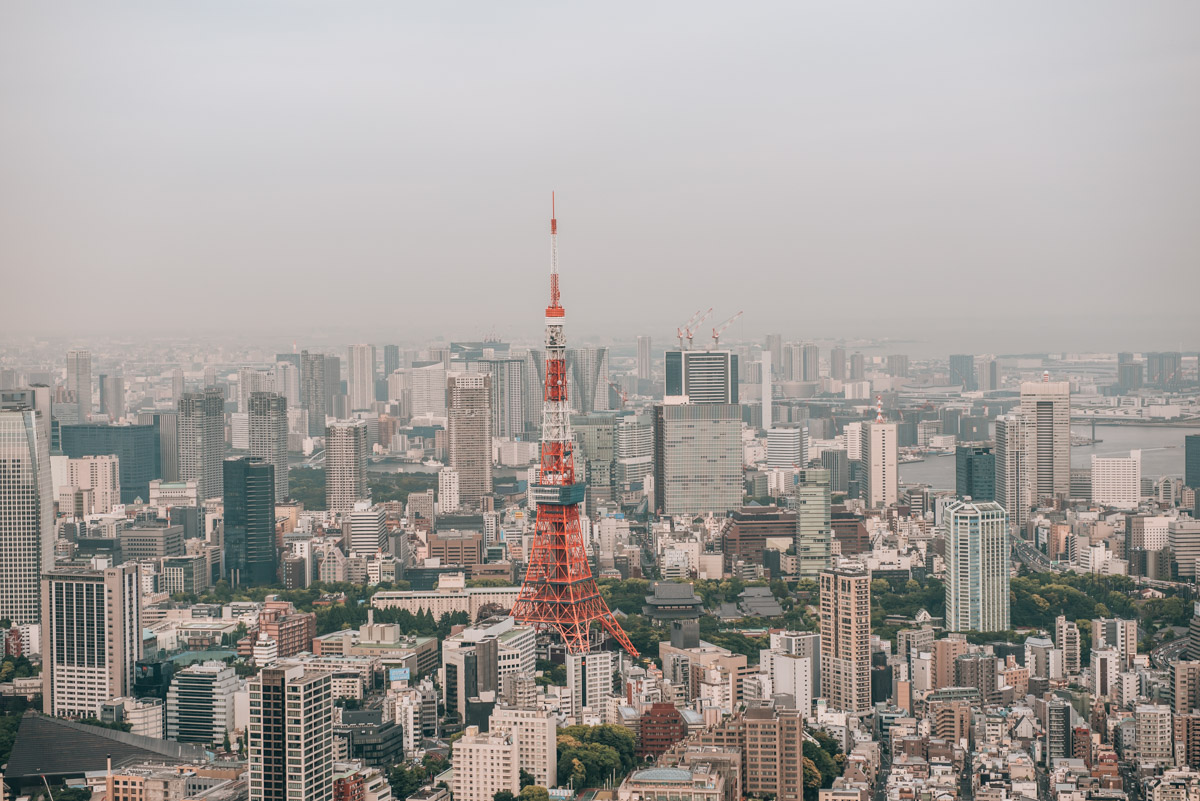 2. View from the Tokyo Tower

This is the building we just saw from the Mori Tower. If you’re wondering why it has such striking resemblance to the Eiffel Tower in Paris, then you won’t be surprised to hear that the Eiffel Tower was the inspiration behind the structure of the Tokyo Tower.

The Tokyo Tower has two observation decks: the Main Deck at 150 meters and the Top Deck at 250 meters. You can choose to buy a ticket either for the Main Deck only or for both viewing platforms.

We decided to just see the main deck as we couldn’t quite justify paying three times more to ascend the extra 100m. Plus, we personally find it more exciting to be at a similar height to the other skyscrapers anyway. The view from the Tokyo Tower is really cool in the sense that you feel very close to the city. However, it is a bit of a pity that you can only enjoy the view behind glass panes.

A special feature here is the Skywalk window: which is made of very thick and sturdy glass, where you can look through and even walk over it.

You can buy your ticket in advance here: Tokyo Tower (Main Deck)

Information about visiting the Tokyo Tower 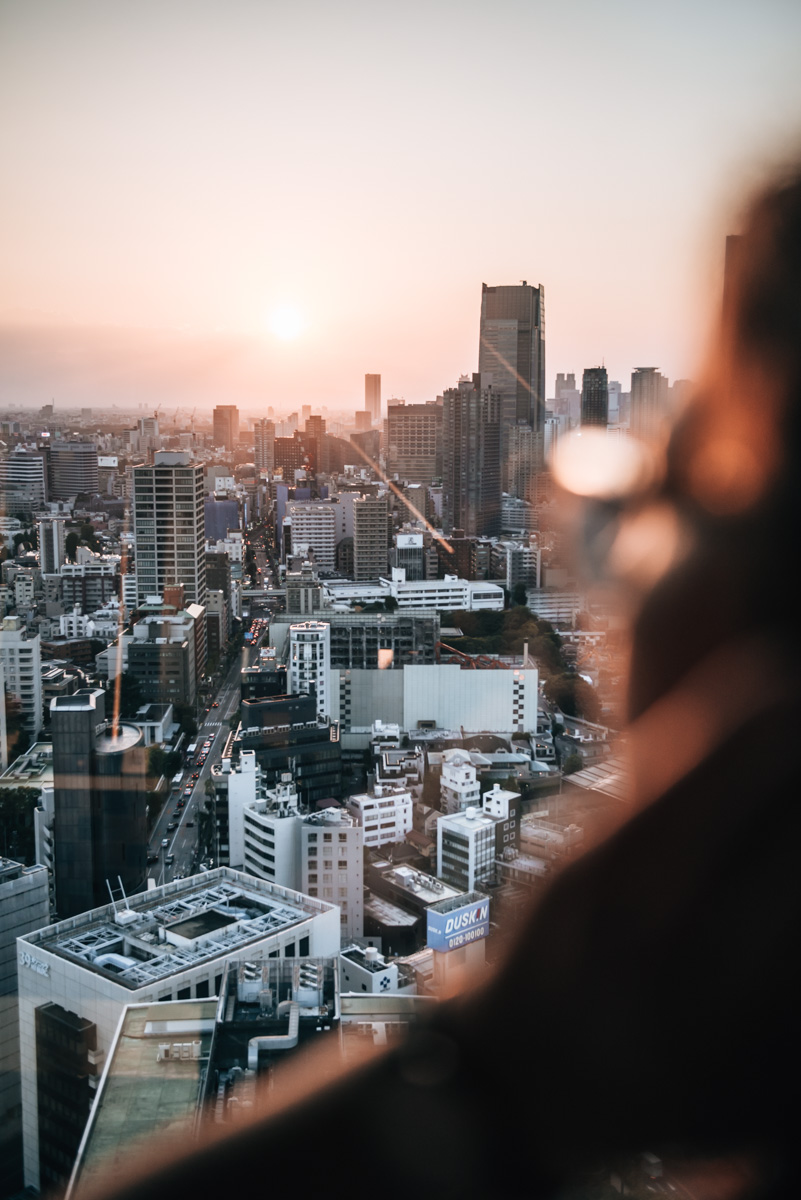 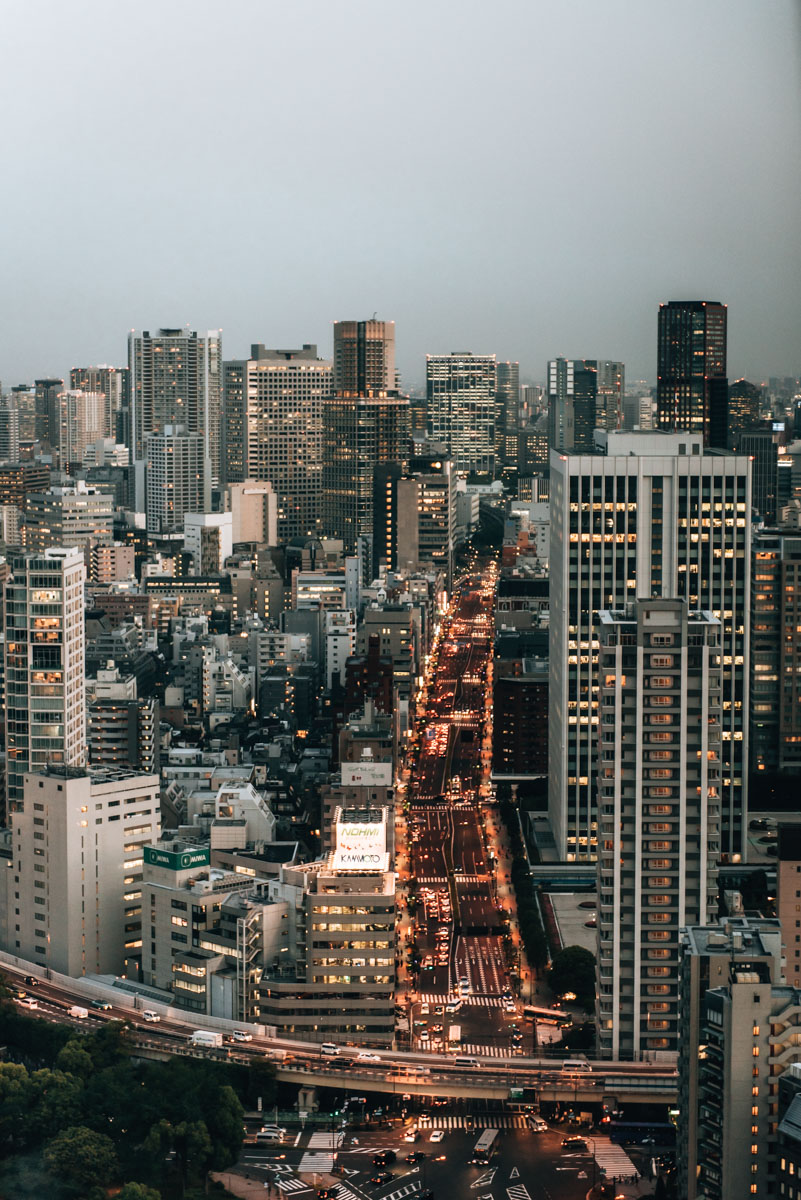 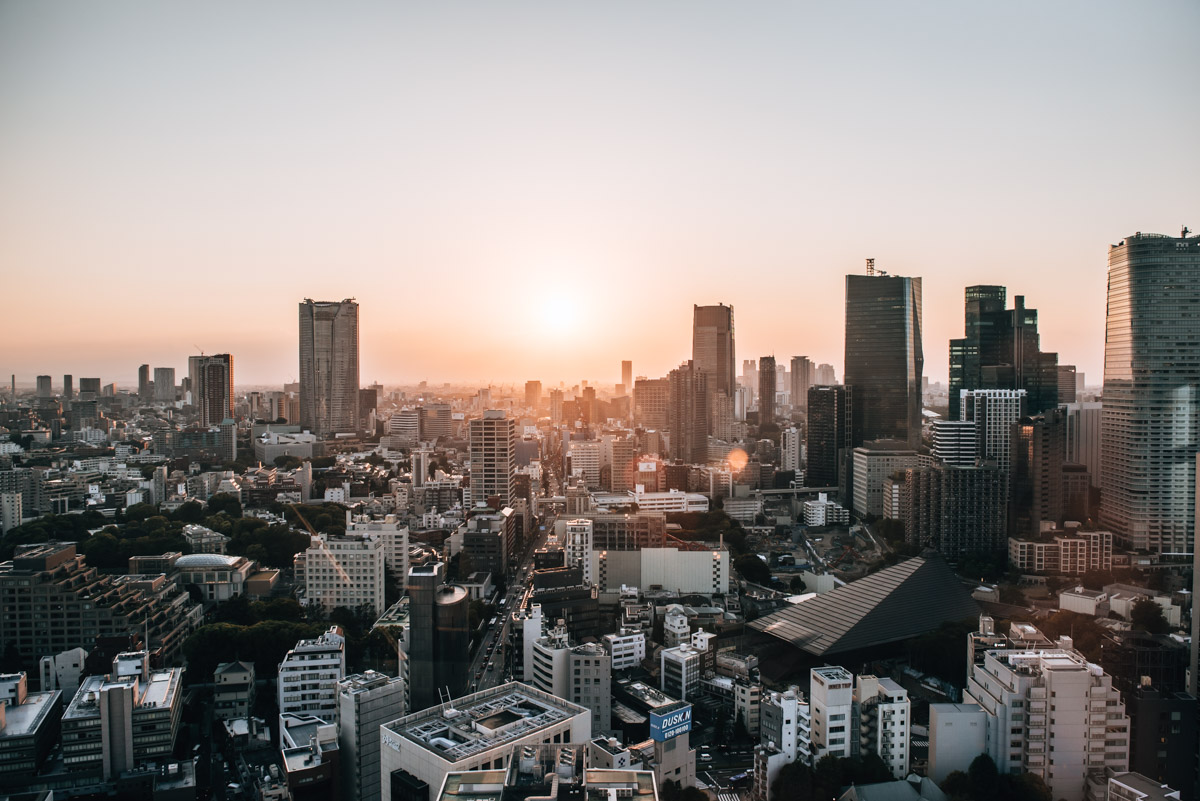 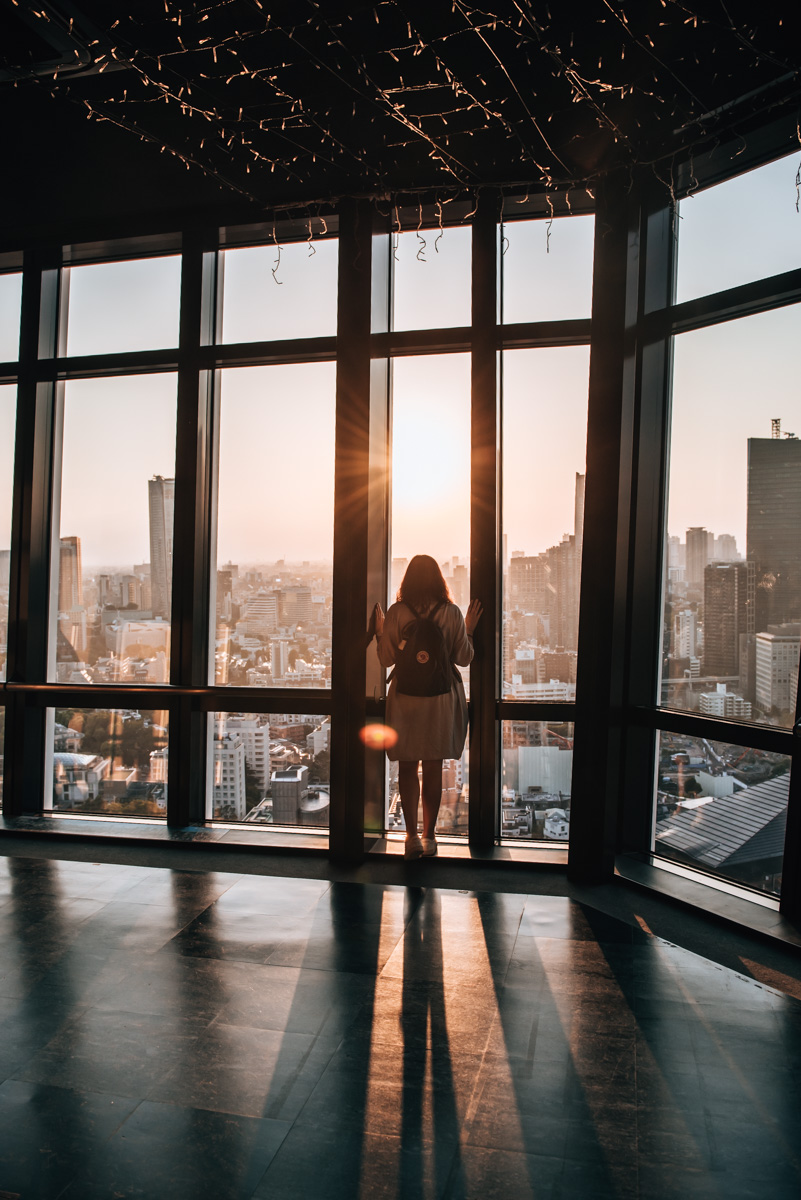 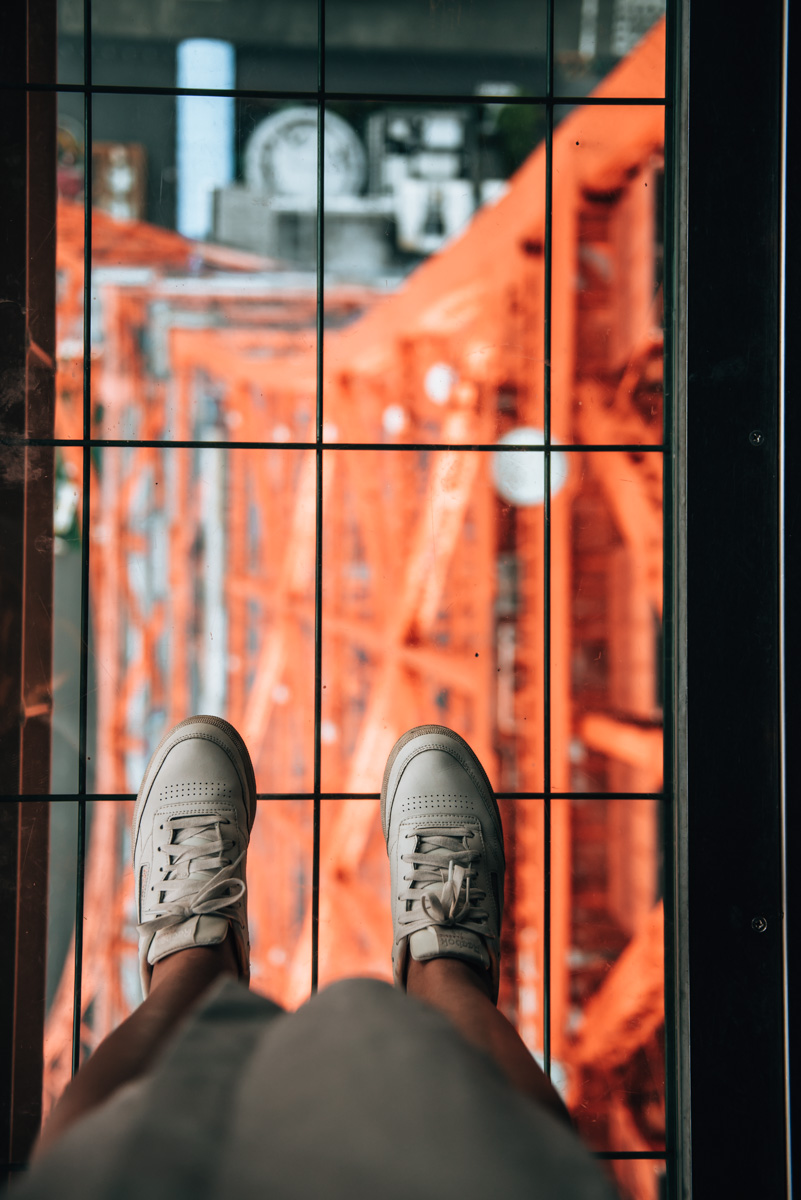 High. Higher. Tokyo Skytree. The tallest structure in Japan (and consequently, the second tallest in the world!) also houses an impressive viewing platform. More specifically, there are two lookout points: One at 350 meters (Tembo Deck) and one at 450 meters (Tembo Galleria). We opted for the Tembo Deck, as we thought 350 meters was already high enough.

The view from the Tokyo Skytree is completely different from any other observation deck: the view is more like what you would see from the window seat of a plane. From such a height, Tokyo looks more like a toy city – which is just as spectacular, but gives you a different feeling.

As expected, the amount of people in the Skytree is considered crowded. The viewing platform at 350 meters (Tembo Deck) actually covers three floors, all of which were well-filled. There is also the option to get fast entry tickets for the Tokyo Skytree, which was not necessary during our visit (in May), as we didn’t have to wait long to get up. If you are visiting during the high season (for example, during the cherry blossom season), then a fast-entry ticket might be well be worth it.

You can buy your ticket in advance here: Tokyo Skytree

Information about visiting the Tokyo Skytree 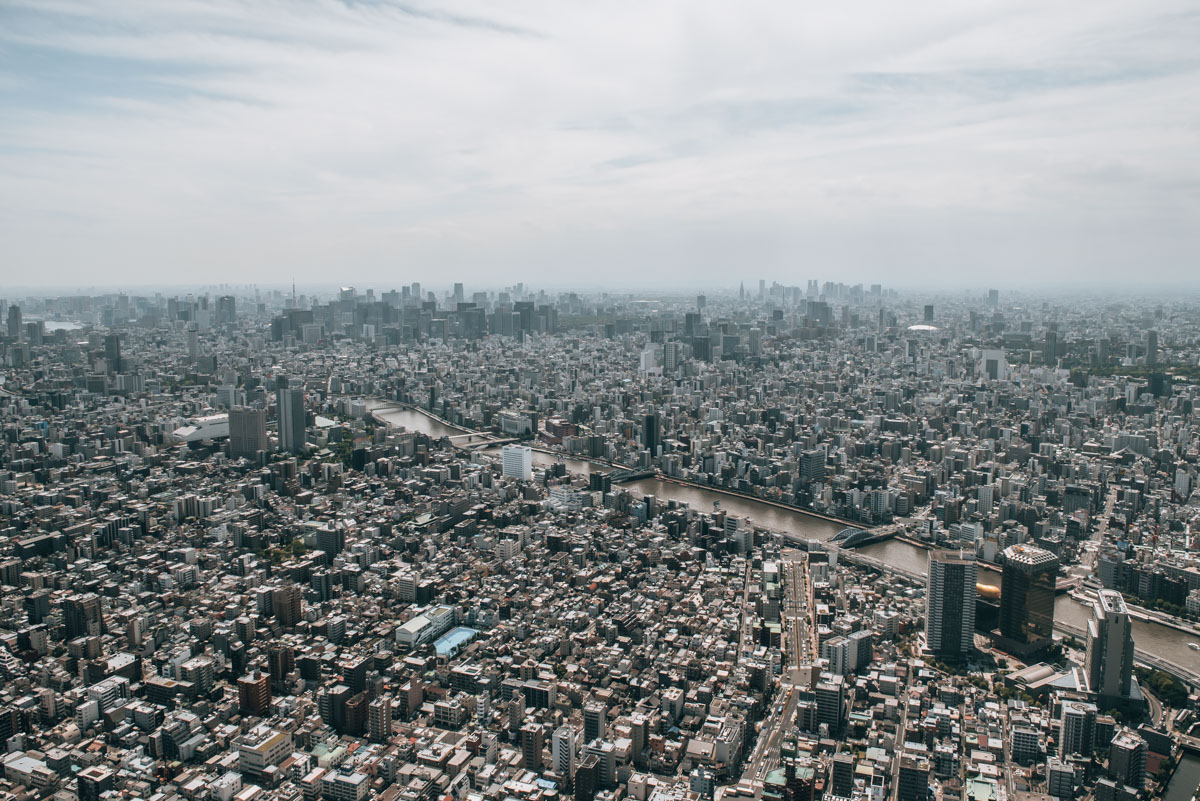 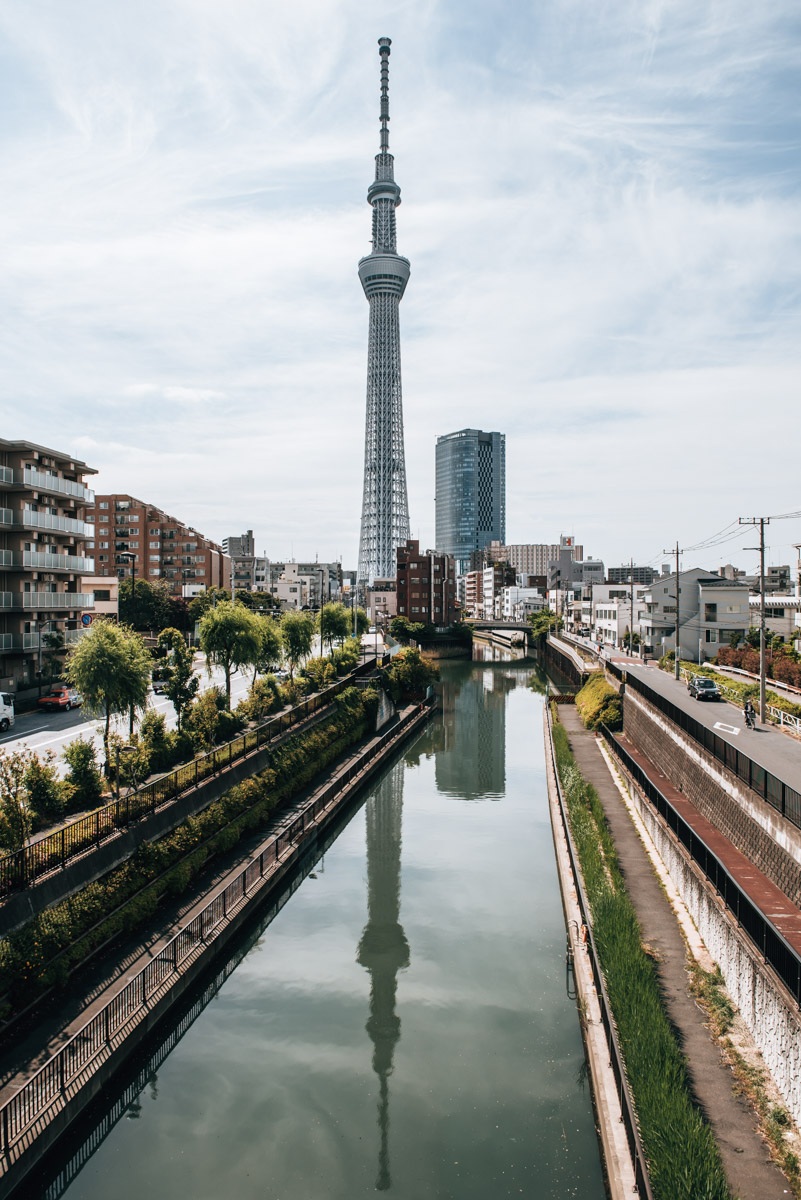 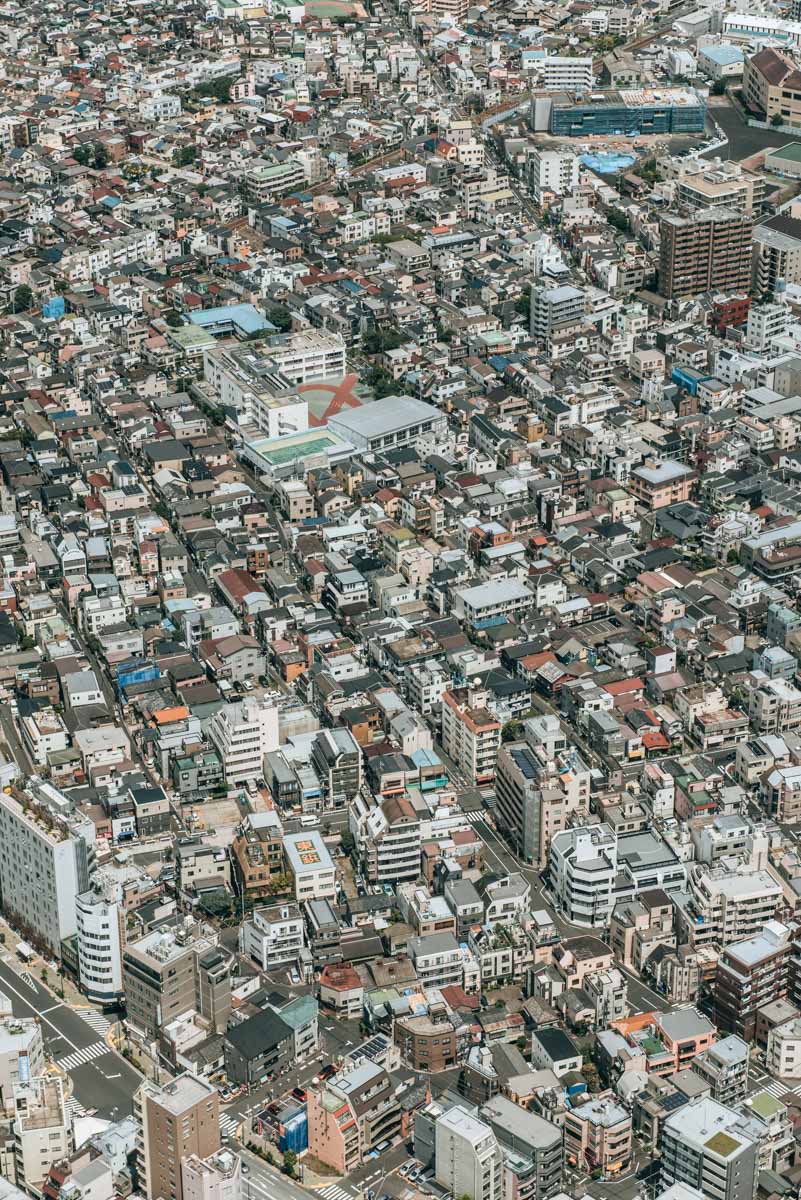 4. New York Bar: The Bar from “Lost in Translation”

The movie scene from “Lost in Translation”, where Scarlett Johansson and Bill Murray sat and pondered about life – of course, we could not leave this place out! Anyone who has seen the movie will probably understand why we absolutely had to visit this bar.

New York Bar is the place where many of the movie scenes were shot – by the way, totally recommend the movie. Located on the 52nd floor of the Park Hyatt Hotel in the Shinjuku district, you have a stunning view over Tokyo from the bar – not that it could be anything but impressive.

However, due to the bar’s location and the popularity of the movie, the prices are highly inflated: in fact, we paid 100 Euros for a total of four cocktails. If we had stayed past 8pm, we would have added another 2,500 Yen per person for Cover Charge… that’s insane! From 8pm onwards, there’s usually a live jazz band, which is one of the reason’s for the high entrance fee. But we played it smart by asking for the bill at quarter to eight, while still getting the chance to hear the first notes of the jazz band after paying.

All in all, the visit was an expensive one, but also a really special experience. We had no problem getting a seat and as a bonus, they provide free nuts to snack on – although that still does not fully justify the insane prices! We would recommend coming just before sunset so that you can watch the lights flickering on throughout the city. 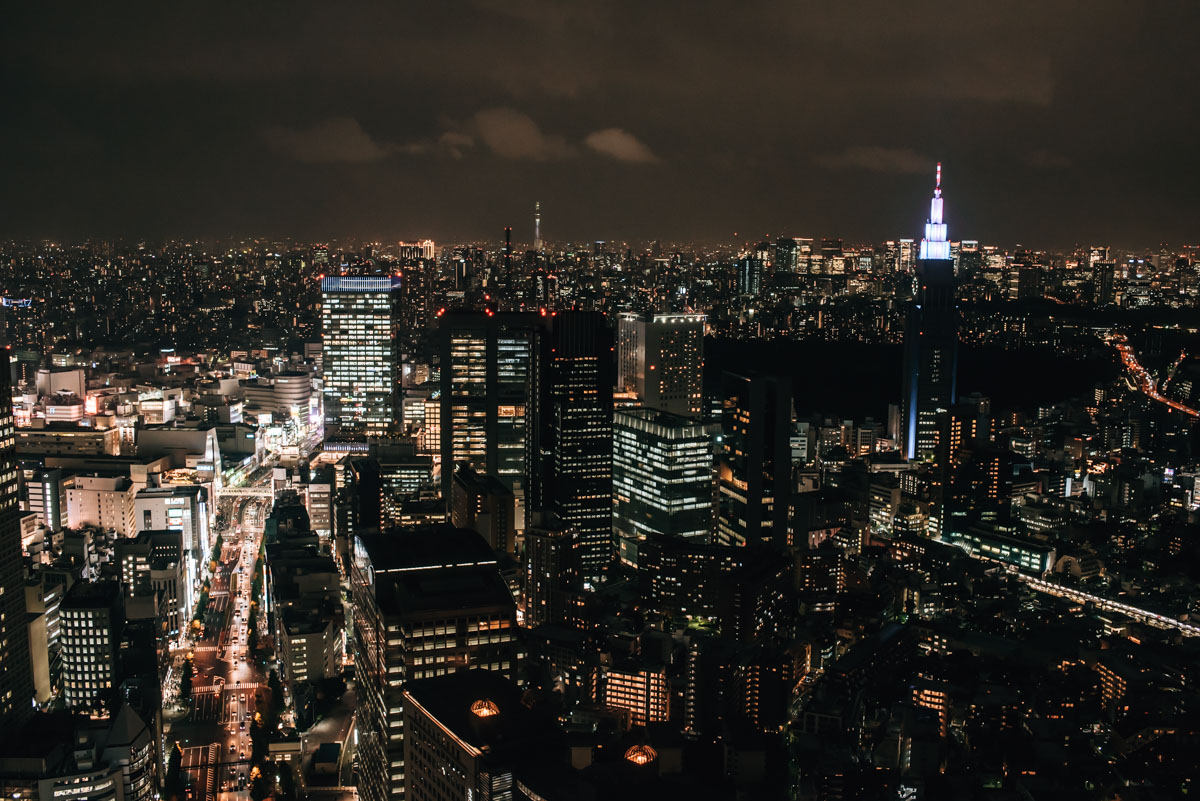 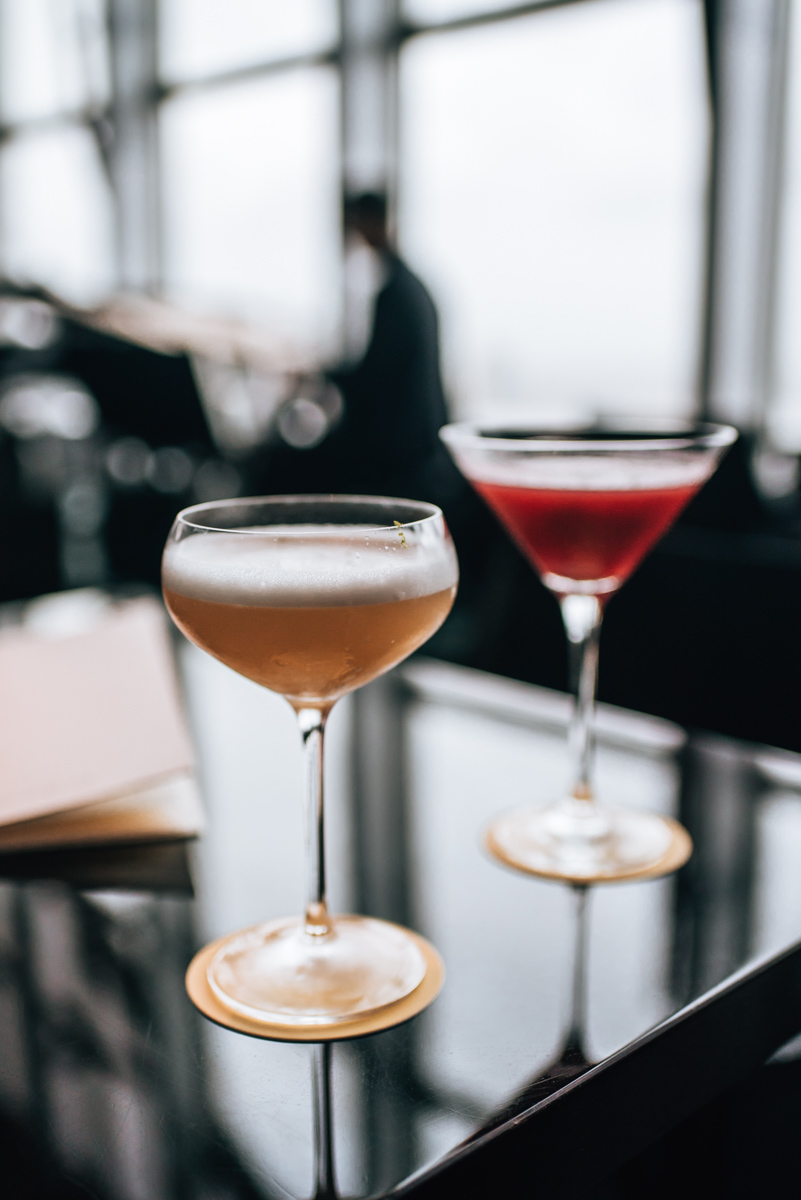 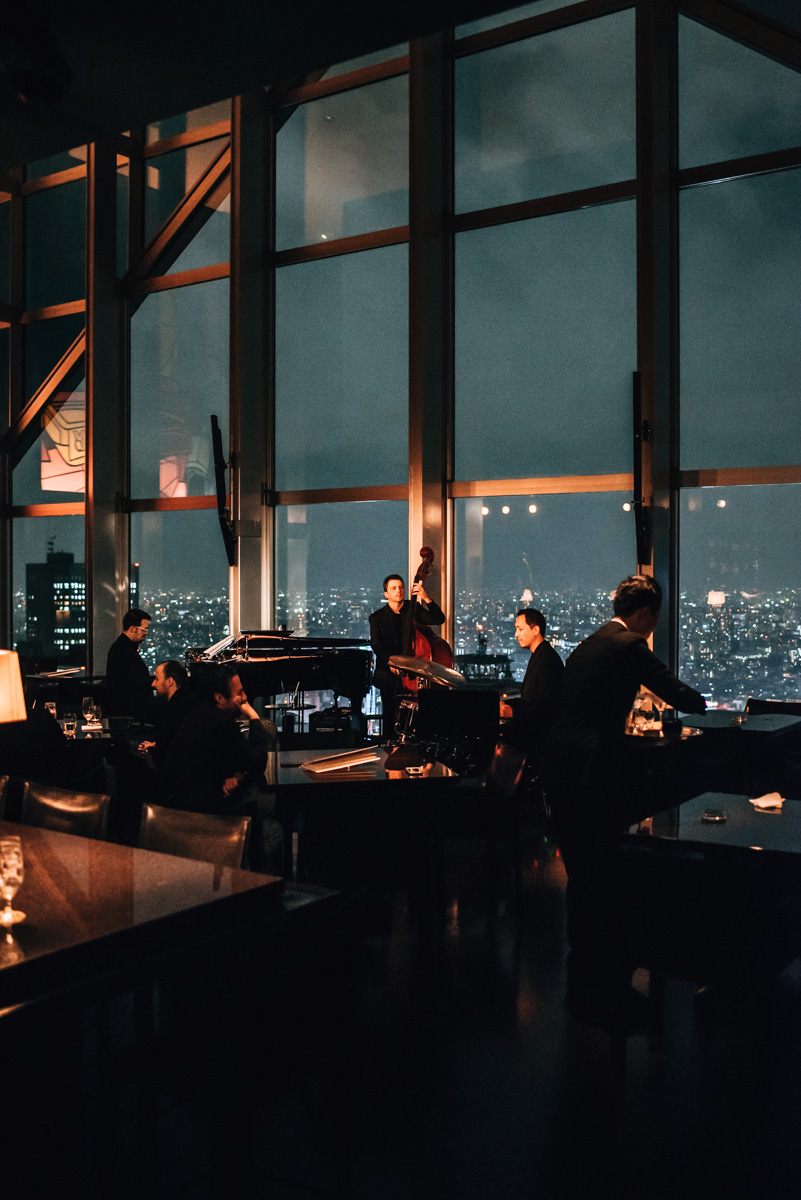 The one and only free lookout point in this blog article, is the one at the Tokyo Metropolitan Government Building. Considering the entrance is free, we think that the view is really quite amazing and definitely worthwhile seeing.

The Metropolitan Government Building is also home to the town hall and consists of two towers – you will find a viewing platform on both.

During our visit, the North Tower was being renovated, so only the South Tower was accessible – but no big deal, as the view is fantastic from both towers. However, taking photos proved a little difficult since the windows were quite reflective – but hey, it’s free entry so…!

The only downside was probably due to the fact that the Metropolitan Government Building is free to visit, which attracts a larger crowd. As we arrived there around 5:30pm, it was a 10 minute wait before we could finally take the lift up.

How to get there: The nearest subway station (Tochōmae Station, which you can get to via the Ōedo Line) is about a 5-minute walk away.
Opening hours: 10 am – 10 pm, last admission 30 minutes before closing
Entry Fee: free 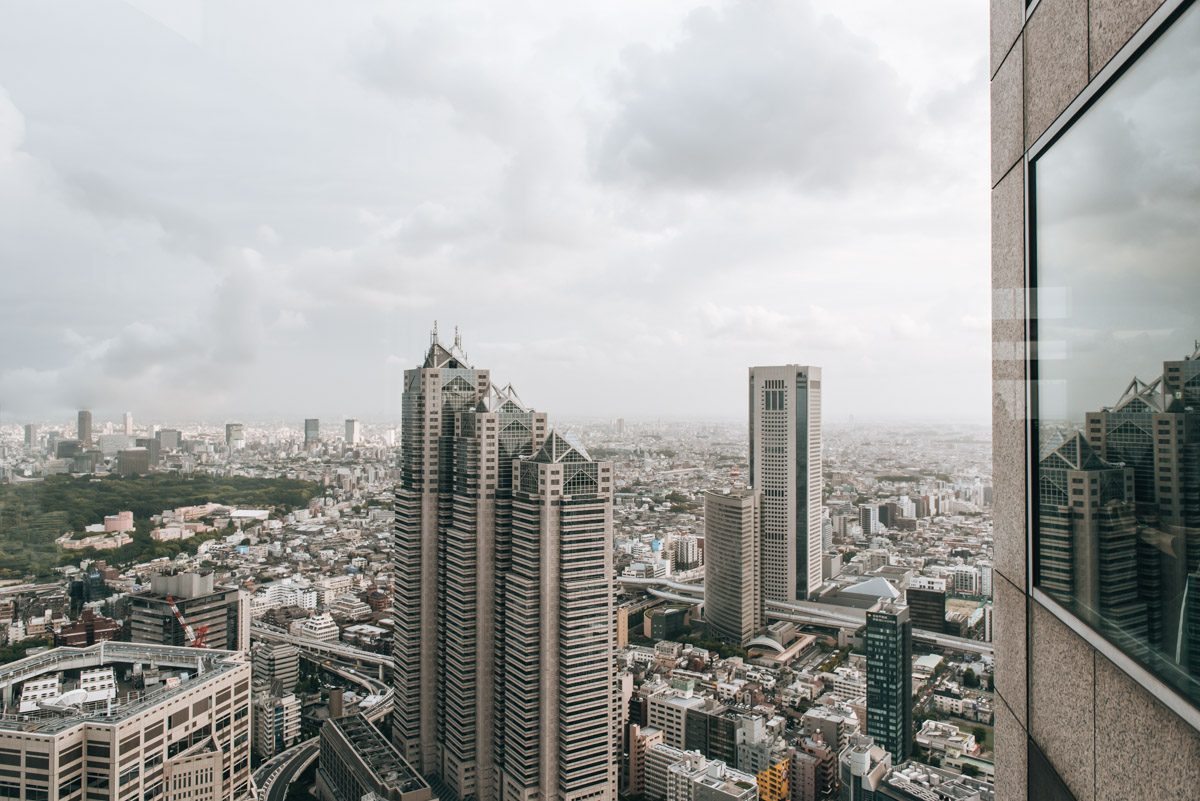 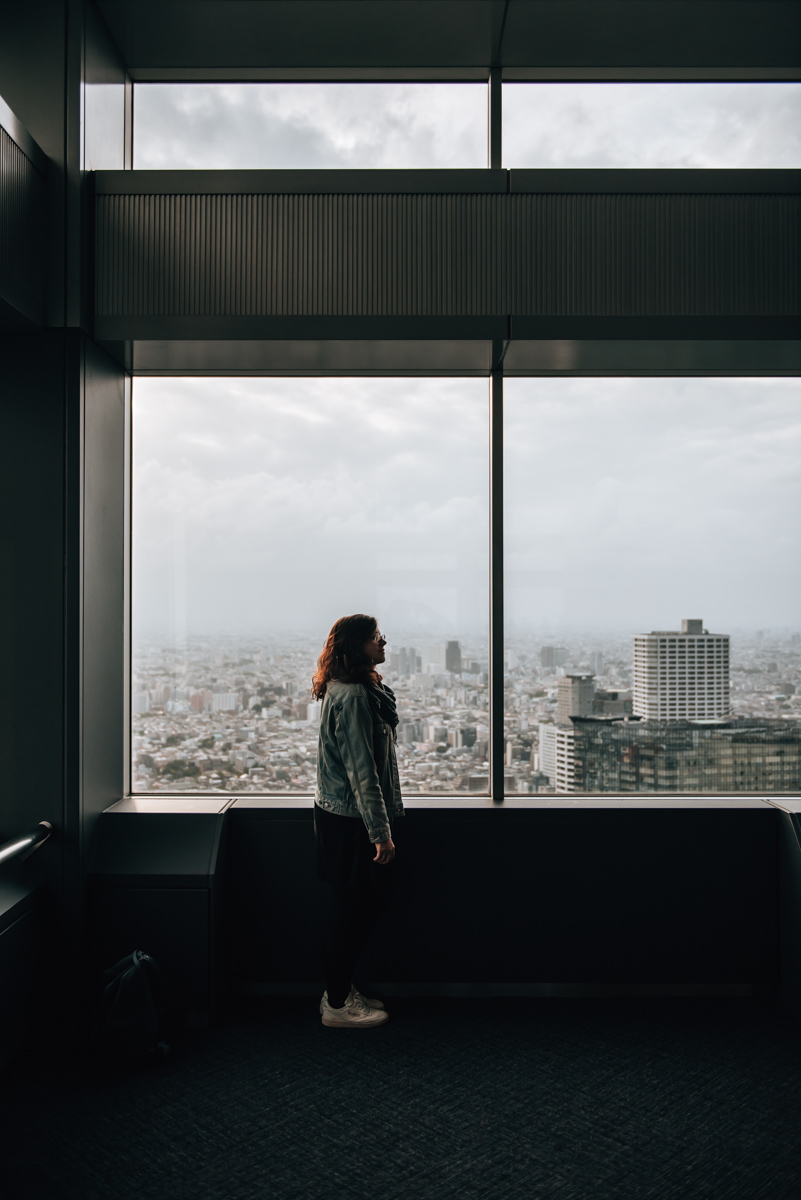 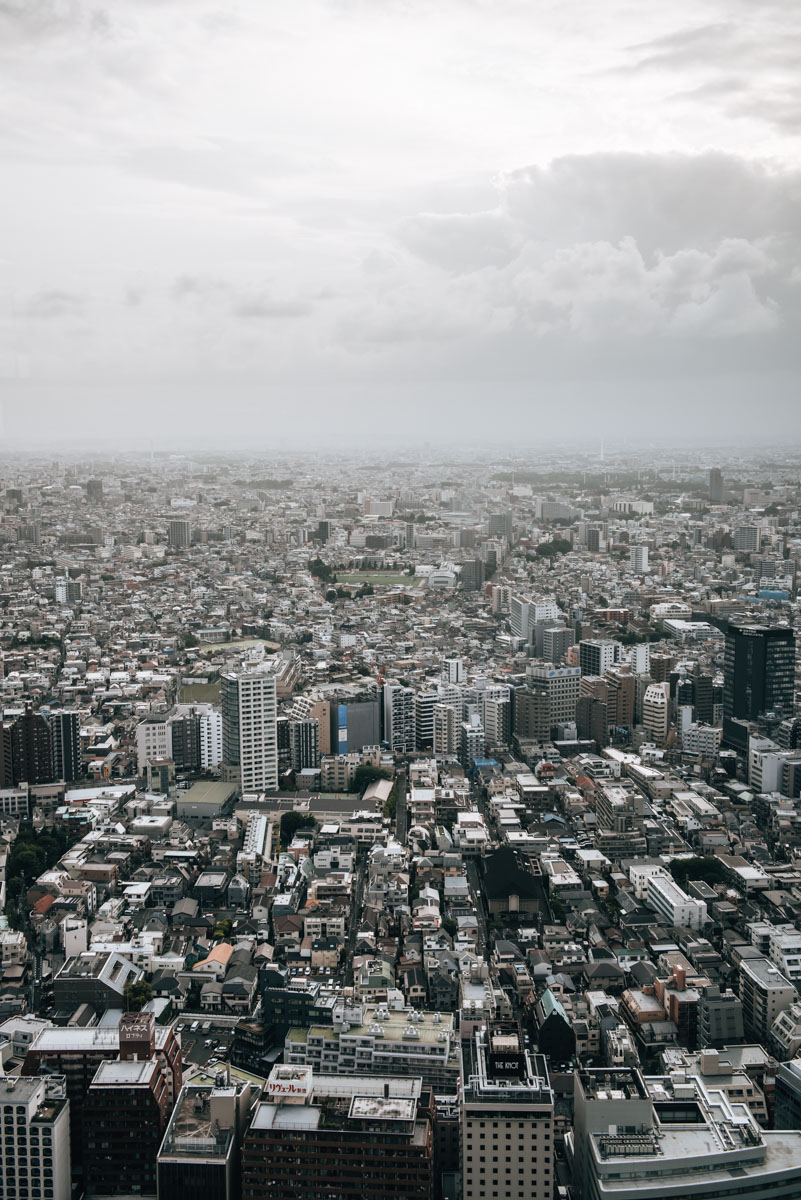 Out of the many viewing platforms, this one is more of a secret location: the World Trade Center of Tokyo. Unfortunately, the construction of a new skyscraper meant that the distant view was somewhat obscured. Once upon a time, you could see Fuji from up here, even on a clear day – sadly, that is no longer the case.

But you can take a photo of the rather elegant-looking skyscraper and still have a nice view of the Tokyo Tower. We also found it rather intriguing, watching the trains (and Shinkansen trains) pass by, as you have a direct view onto the train tracks from up here.

During our visit, we noticed that we were basically the only ones and found it surprising how little commotion there was up here. Despite the building itself being a little older and worn down, the focus is more on the view. 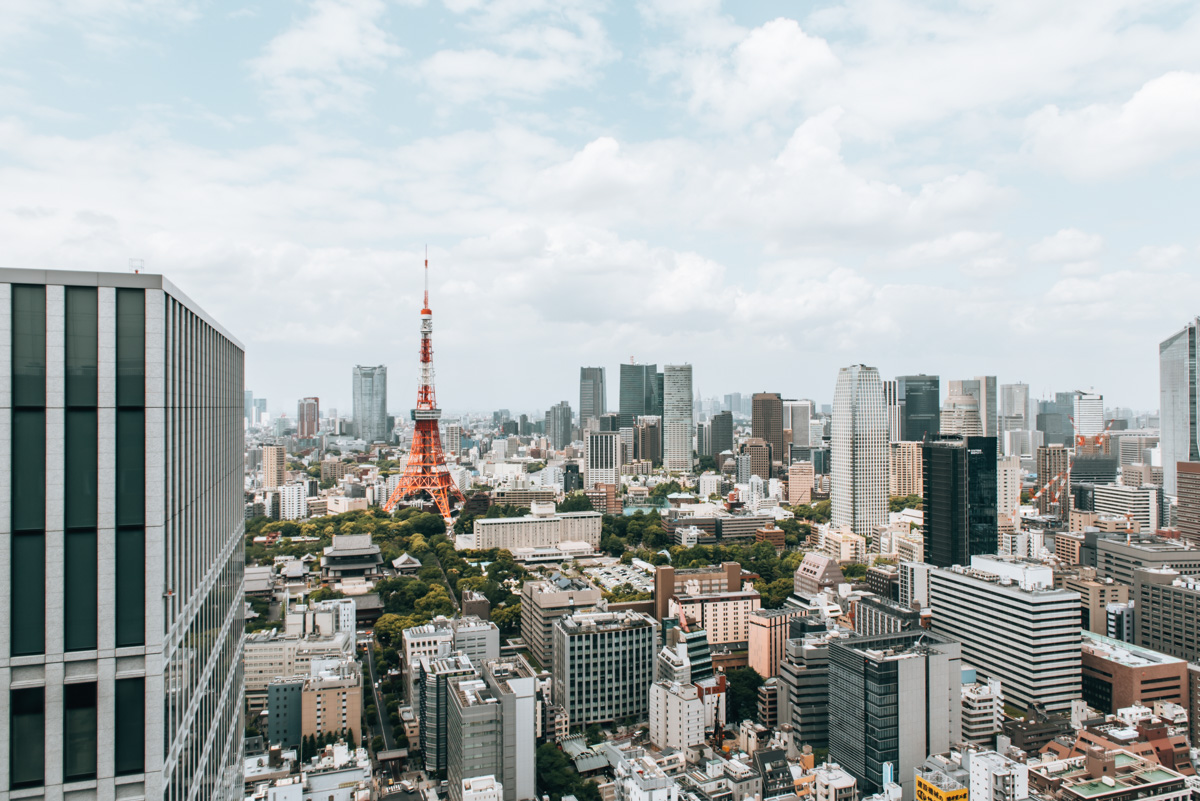 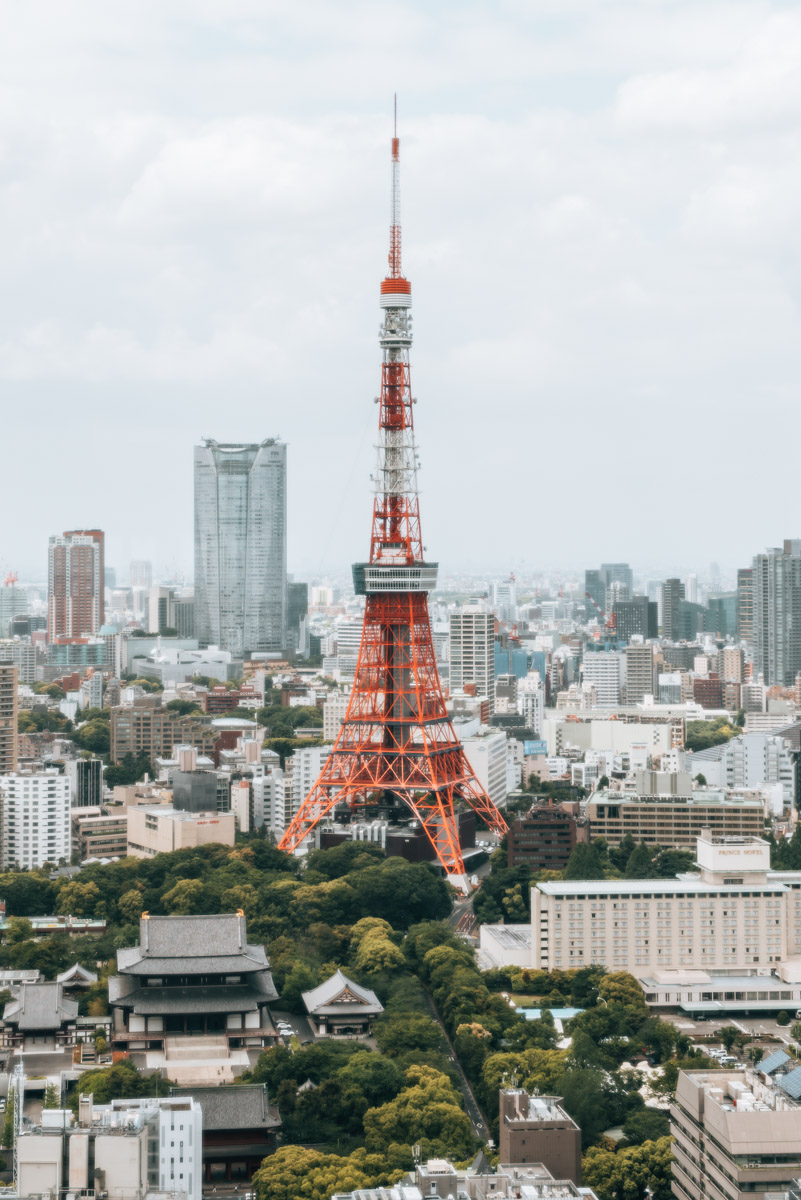 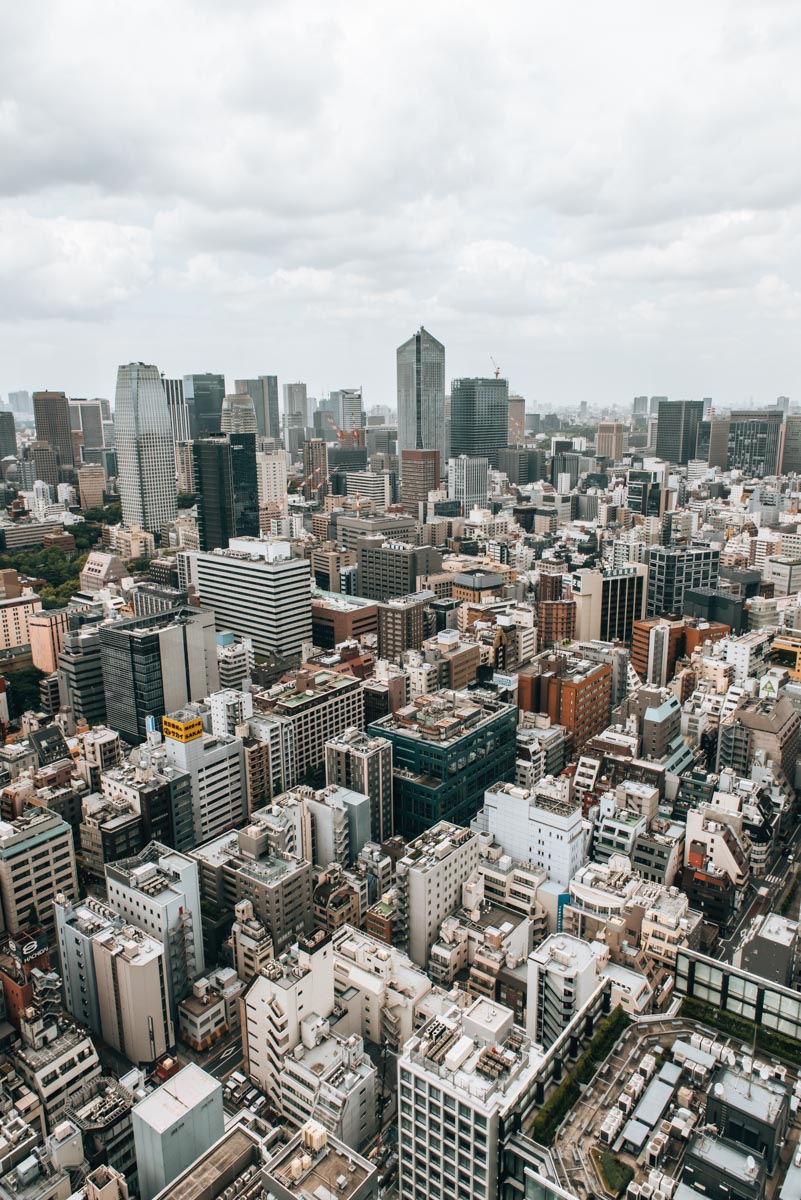 One particular view point that has really made a name for itself, is the world famous intersection in Shibuya. The best view of the Shibuya Crossing can be found on the rooftop of the shopping centre ‘Magnet by Shibuya 109’.

When all the pedestrian lights turn green at the same time, the intersection resembles that of an anthill. Apparently, the Shibuya Crossing is said to be the busiest between 5 and 7 pm. These photos were taken during that period.

Unfortunately, the viewing platform is rather small and there are very few places from which you have a really good view of the intersection. With photography, patience goes without saying.

Information about the viewing platform at Magnet by Shibuya 109

Getting There: The nearest station is the Shibuya Station (which connects to several subways and JR trains). You can already see the intersection from the station.
Opening hours: 11 am – 11 pm
Entry Fee: 600 Yen 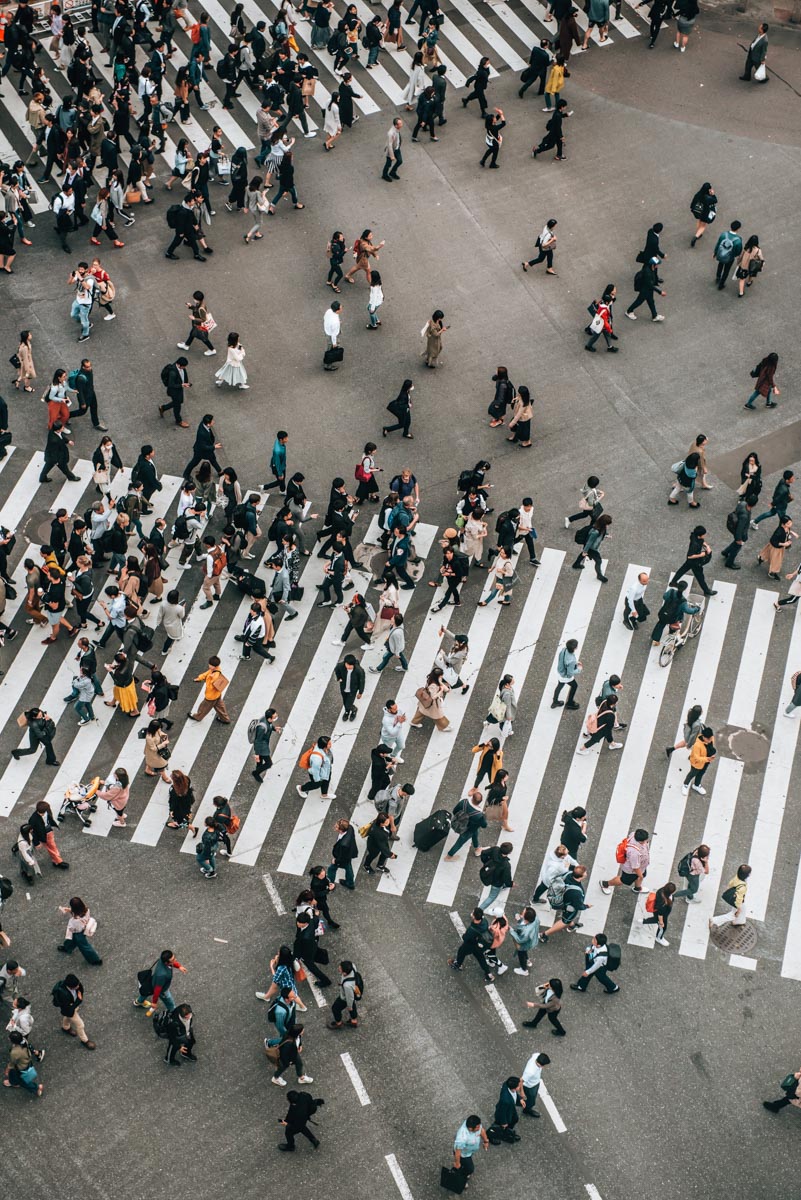 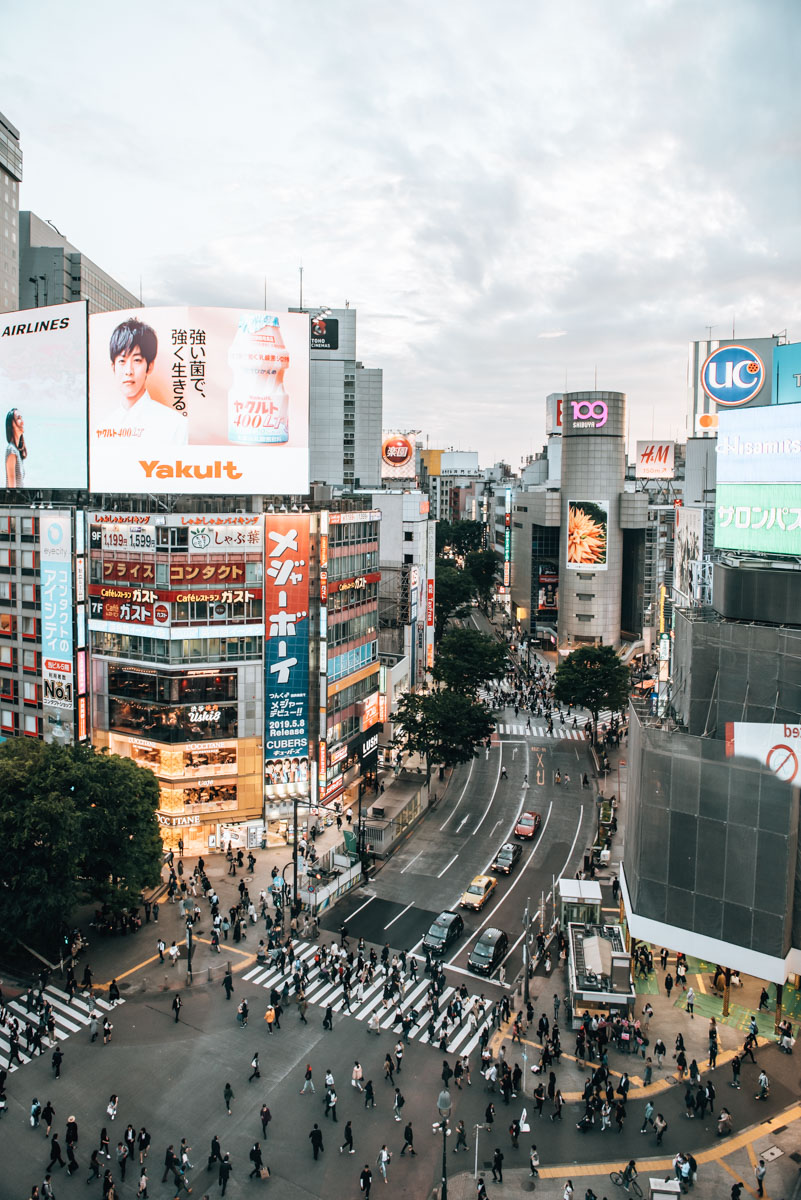 8. Hotel in Tokyo with a View

Last but not least, a hotel recommendation that comes with a view. We had a very nice perspective of the city from our room at the OMO5 Tokyo Otsuka. Of course, it doesn’t beat the spectacular views from the Tokyo Tower, but it was pretty awesome waking up to this view every morning.

Our room was right up on the 10th floor – so if you’re also looking to stay at this hotel, try request for a room on one of the higher floors.

The hotel itself comes highly recommended. Located just a two-minute walk from the JR station (Yamanote Line), you can reach many of the sights rather quickly. The rooms are maisonette-like, with the very comfortable beds in the style of a loft-high-bunker and a few wooden stairs to climb up to it. For older people, this could be a bit tricky. But for us, it wasn’t a bother – in fact, quite the contrary!

Breakfast was not a highlight, but to be honest, this is the case almost everywhere in Japan. It’s best to have breakfast outside the hotel.

You can view/book the hotel here: OMO5 Tokyo Otsuka 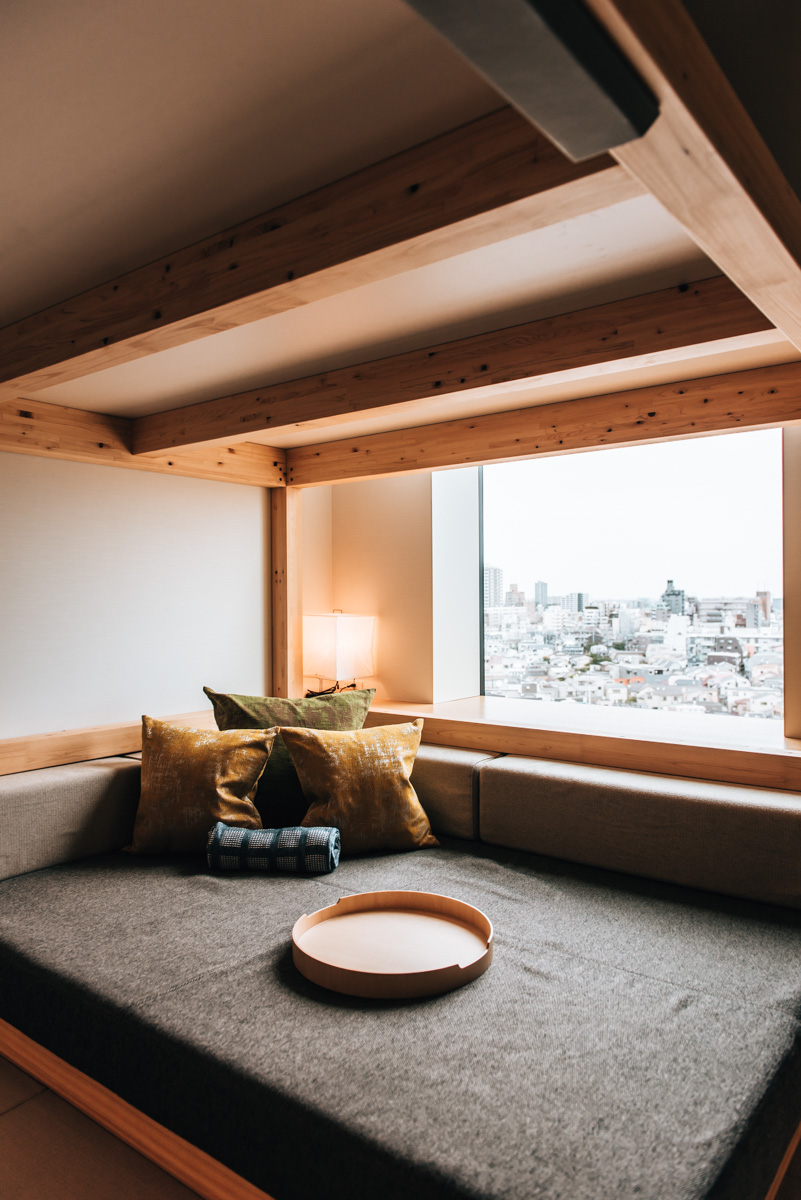 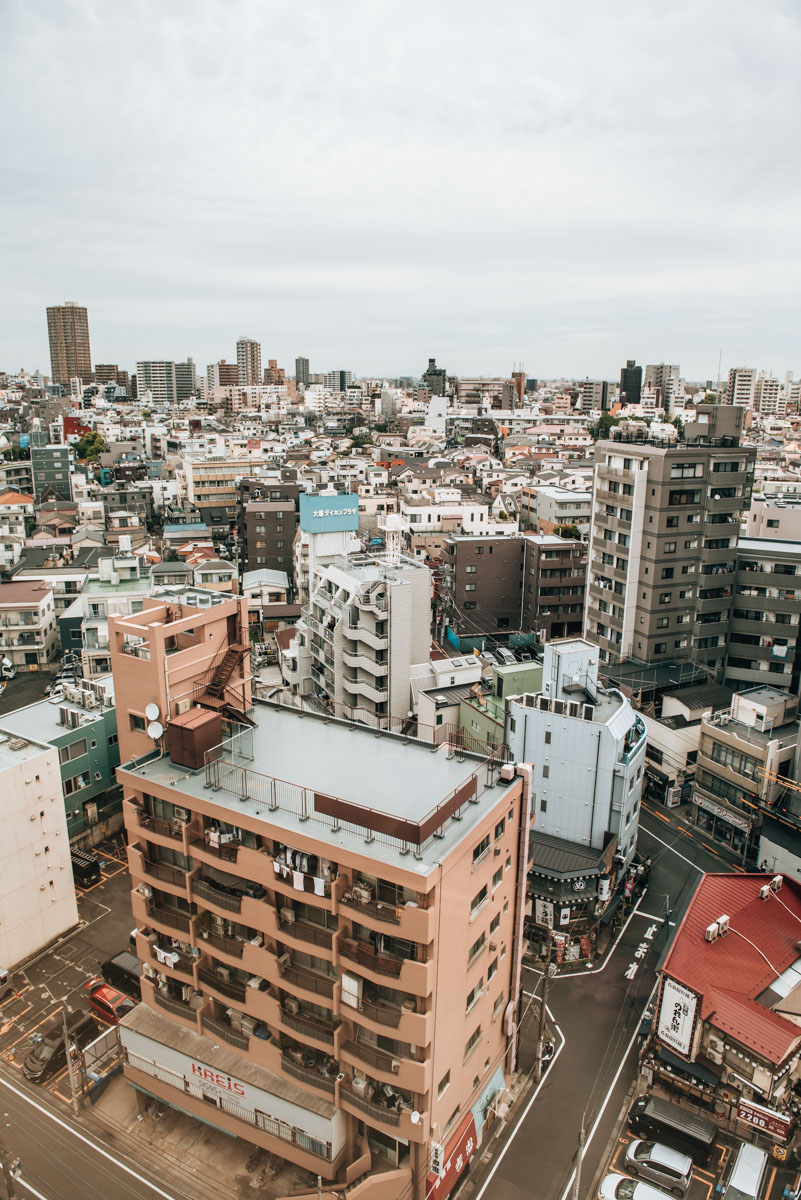 We were invited by All Nippon Airways (ANA), who we want to thank for this amazing opportunity of travelling and exploring Japan! For full disclosure: ANA financially covered our return flights and our itinerary for the first 5 days (Tokyo, Hakone, Osaka). We had full freedom in creating this itinerary and it was just the two of us for the entire duration. After the 5 days, we decided to extend our stay in Japan at our own expense.

This blog article contains our personal recommendations in the form of so-called affiliate links. If you book or buy something through these links, then we will receive a small commission. For you, this does not change the price at all. A million thanks from the both of us!

Which lookout points in Tokyo have you noted down as your absolute must-see? Do you have any more tips for stunning rooftop bars or viewing platforms? We look forward to reading your comments and suggestions!