In the remote south-east of New Zealand’s South Island, is one of the most sparsely populated regions in the country: The Catlins. This rugged coastline impressed us so much that it’s now among one of our most beloved regions in all of New Zealand. Read on to see the highlights and the most beautiful sights in the Catlins.

1. What you should know about the Catlins

The Catlins (aka. “Catlins Coast”) is an area of remote and untouched region in the far south of New Zealand. The region starts about an hour’s drive south of Dunedin between Balclutha and Invercargill / Bluff. In the Catlins, the main focus is on the very impressive nature. The climate is rough, the waves strong and the coast rugged. If you want to witness the fascinating wildlife of New Zealand, then the Catlins is the right place to be. Here, the local seals and sea lions roll in the sand and at sunset the penguins waddle back to their nests.

The Catlins are on the Southern Scenic Route – this long stretch of road that runs along the southern coast of New Zealand from Dunedin to Queenstown, is home to some of the most scenic highlights in the country. Although we were particularly impressed by the wild coastal landscape in the Catlins, this region is also scattered with inland gems (such as the waterfalls) that attract visitors. 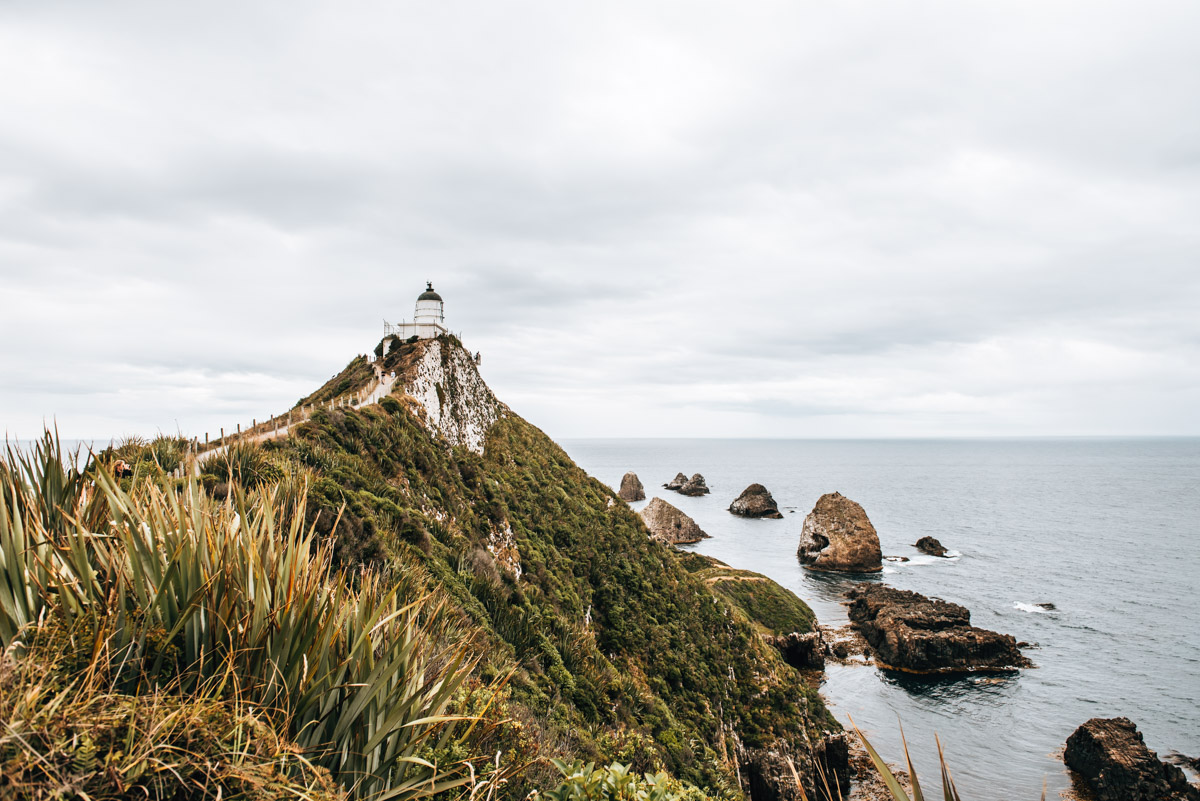 How much time should you plan for the Catlins

The driving time along the Southern Scenic Route through the Catlins (from Balclutha to Bluff) is about 2 hours and 30 minutes. As you can see, the region is more manageable in terms of land area. Theoretically you can leave Dunedin in the morning, visit some destinations in the Catlins and continue to Te Anau or Queenstown in the late afternoon.

However, we would not recommend this tightly scheduled stop-over route for you as there is a lot to see in this region and a lot of hidden gems waiting to be discovered. So if you want a nice and relaxed visit with enough time to explore this fascinating region of the Catlins, then be sure to spend at least one night here. Both our trips to the Catlins have been a one night stay. Two nights are of course even more ideal, but even with a one night stay you can experience a lot, because like we said, the distances are not very far.

When to visit the Catlins

You can, in fact, tour Catlin’s Coast all year round. However, you do have to accept the fact that the climate can be quite rough throughout the year. Drizzle and strong winds are prevalent in the Catlins even in midsummer.

In New Zealand’s warmest months (December, January, February) – this region is somewhat cooler than the rest of the country and experiences large fluctuation in temperatures. One day, we could be walking around in 25 degrees Celsius with shorts and summer clothes. The next, it could be very windy and fresh.

During New Zealand winter (June, July, August) it is much cooler, but relatively mild. The daytime temperatures are usually around 10 degrees Celsius.

Driving in the Catlins

The majority of the route through the Catlins will be along the Southern Scenic Route. The road is paved and in very good condition. However, you may also come across a few gravel roads in the Catlins such as those to Cannibal Bay. If you drive slowly, it shouldn’t be a problem.

There are very few petrol stations in the Catlins (there is one in Owaka that is 24/7 self service). It’s best if you fill up the tank before you make your way to the Catlins as this is not an ideal region to run out of gas.

In order to explore the Catlins in the best possible way, we strongly recommend you to have a vehicle. We booked our rental car through Sunny Cars for our trip through New Zealand. Important when booking a car: Make sure that you do not have to pay a deductible in case of damage. This is also one of the advantages with Sunny Cars, since they take over the deductible in case of accident.

Here we will share with you our highlights in the Catlins. All the destinations have been listed from north to south. At the end of the article you will also find a map in which we have pinned the exact locations mentioned below.

The lighthouse at Nugget Point is probably the most famous and most visited photo spot in the Catlins. From the white lighthouse at the tip of the cape you can enjoy a breathtaking panoramic view of the ocean and the jagged rocks, the “Nuggets”. If you make it in time and the weather is promising, then we can recommend you to visit at sunrise.

Getting to Nugget Point

If you are coming from the north (from Dunedin) then Nugget Point is the first big highlight you reach in the Catlins. You drive along State Highway 1 until you reach Balclutha, then the Owaka Highway and Kaka Point Road will take you to the car park of the Nugget Point Lighthouse. From the car park, it’s just a short easy 10-minute walk to the lighthouse. Note that you can’t actually enter the lighthouse itself. 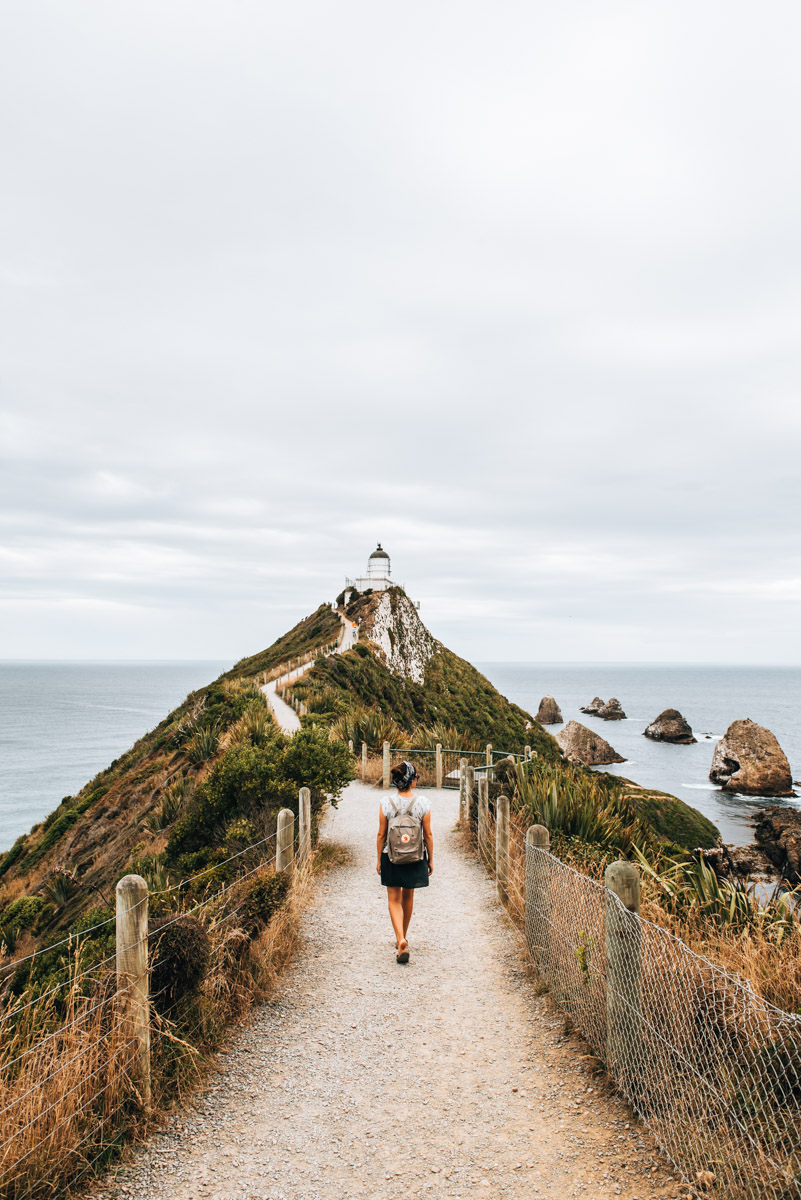 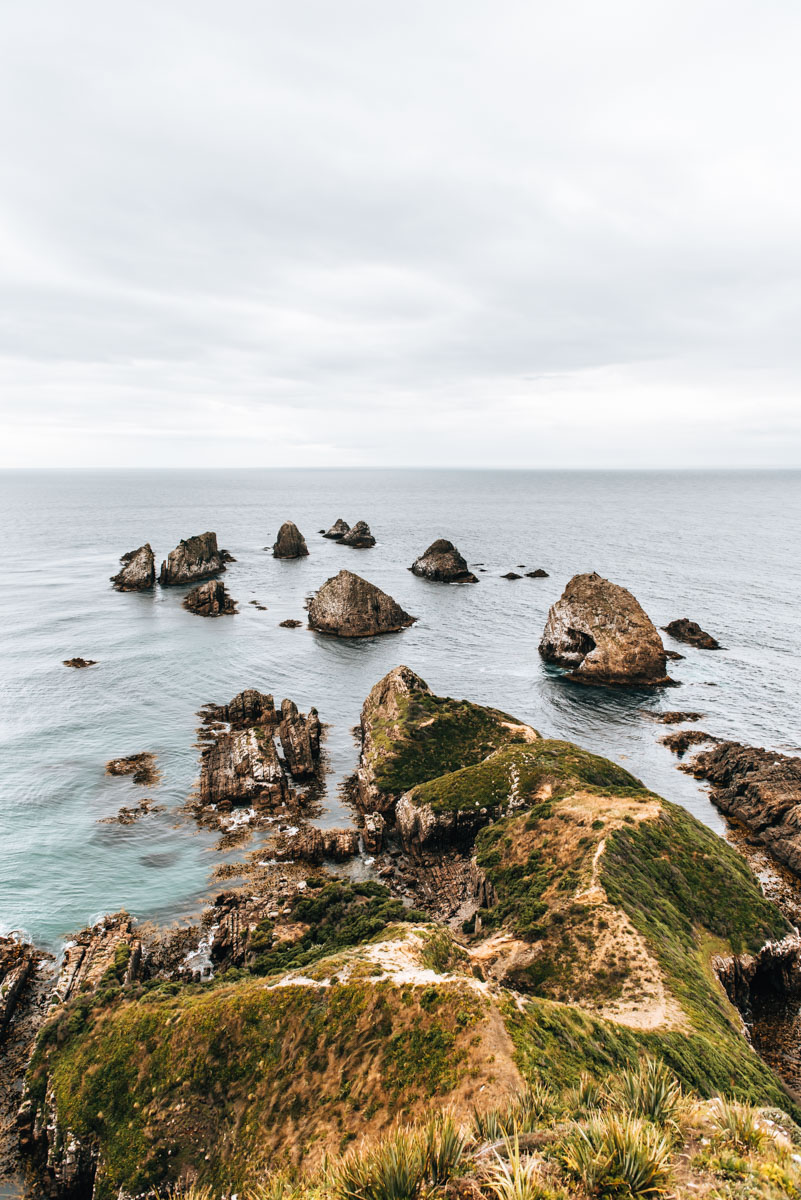 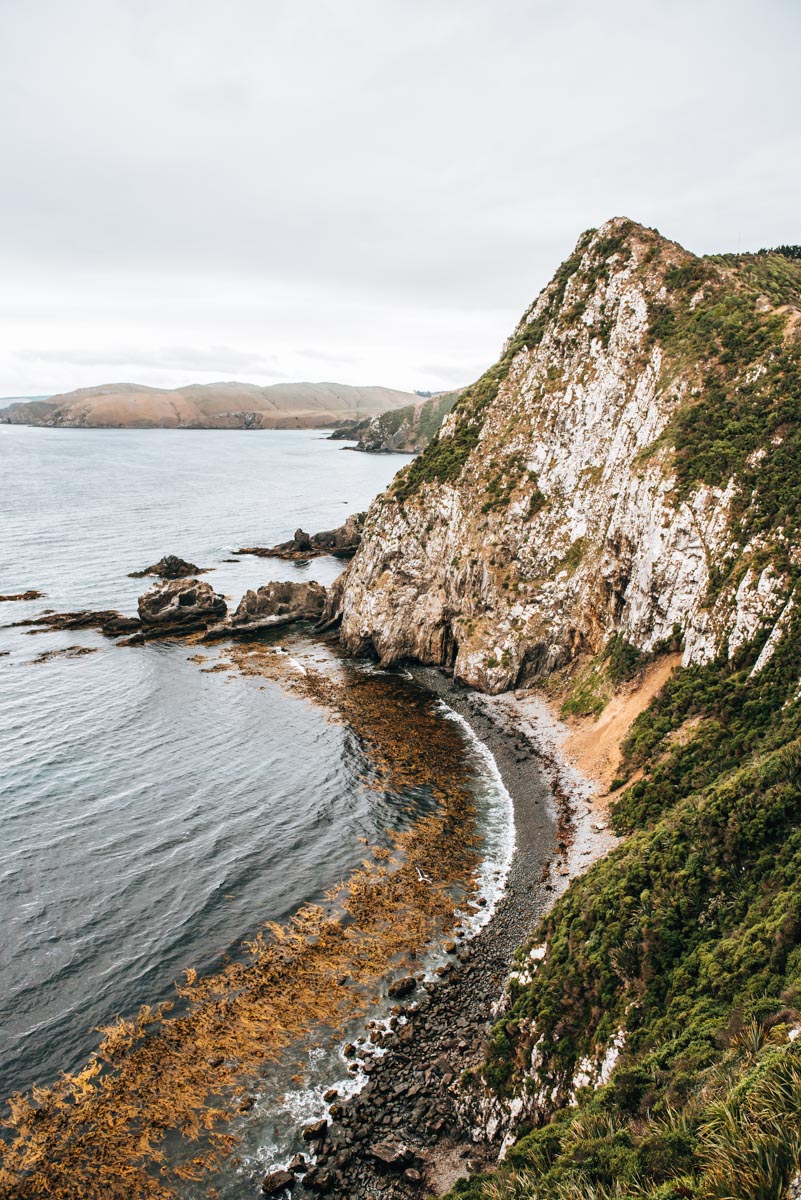 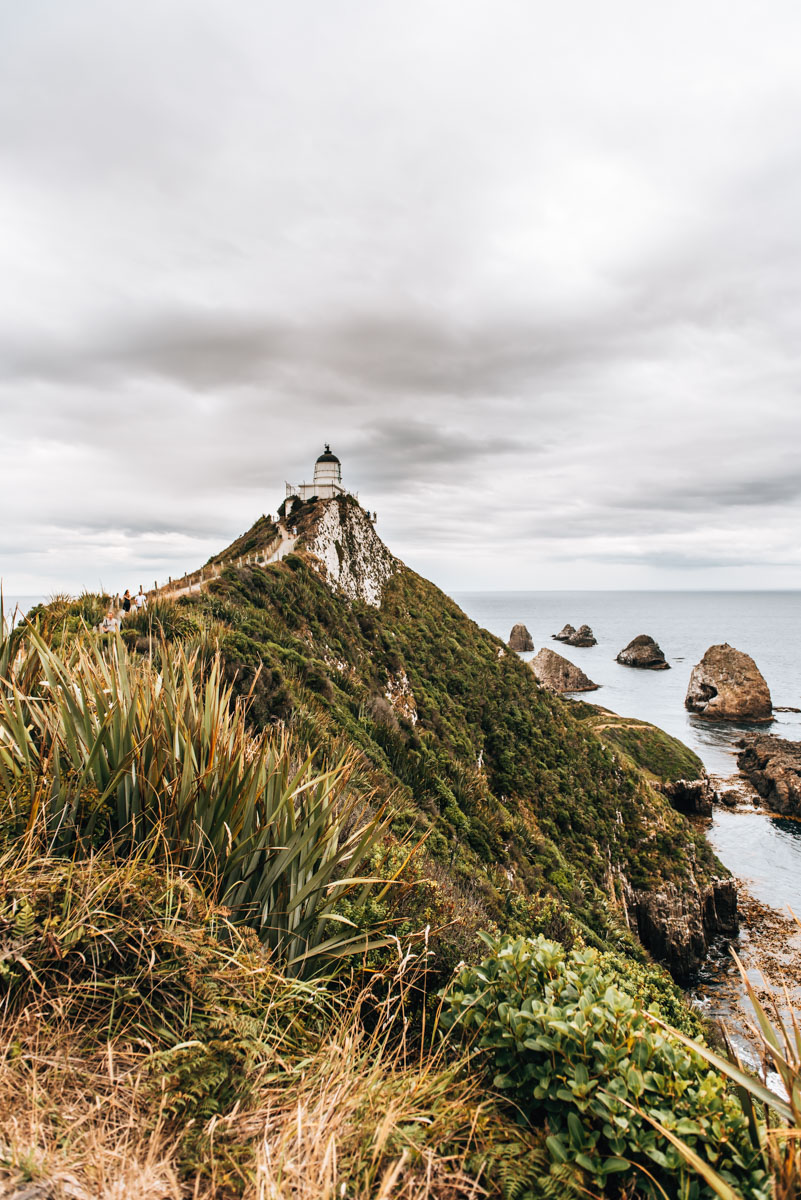 Cannibal Bay is a very rough and barren beach where, with a bit of luck, you can watch wild sea lions in their natural habitat. If you can’t spot them right away, don’t give up as they like to coat their bodies with sand to blend in and therefore often mistaken as rocks.

Note: Always keep a good distance of at least 10 meters from the sea lions. You should never wake sleeping sea lions either. Also, do not try to get in the way between them and their destination… they may chase you and no lie, they are fast on land.

Getting to Cannibal Bay

From the Southern Scenic Route, you turn off to a gravel road (Cannibal Bay Road) and about 15 minutes later you will get to a small car park, just a few steps away from Cannibal Bay. 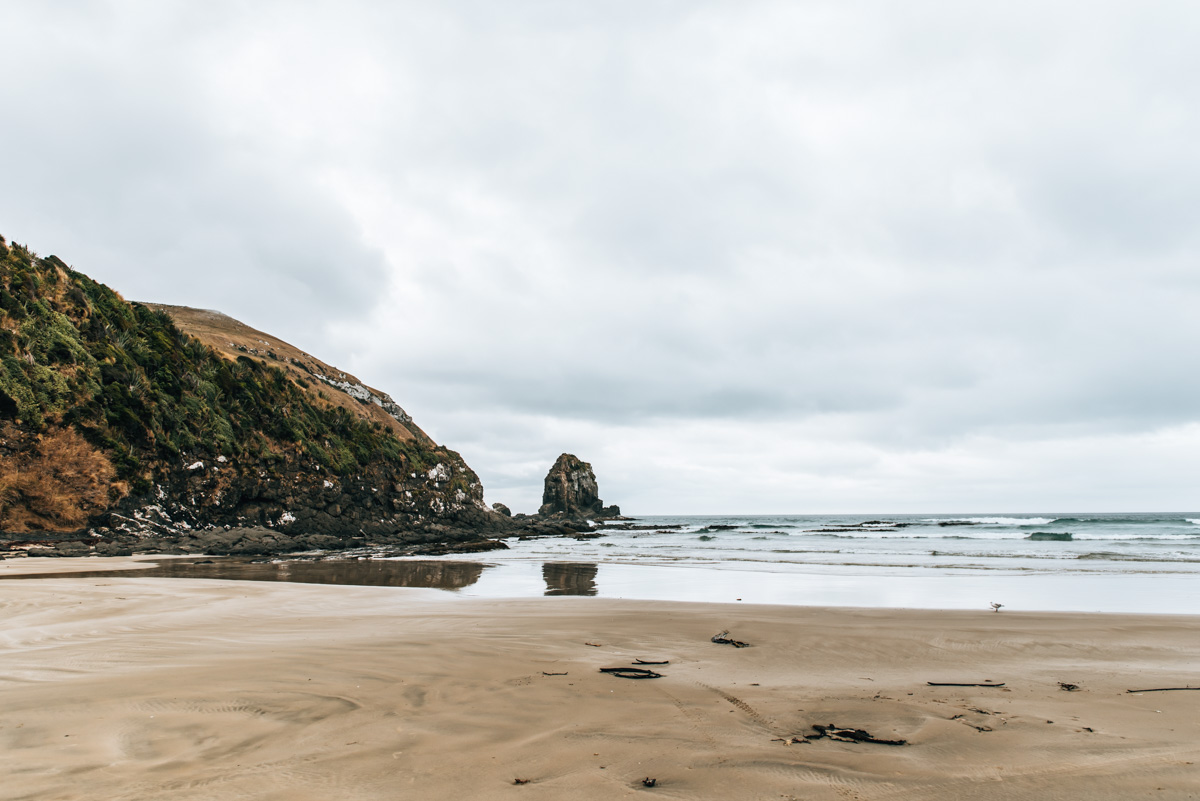 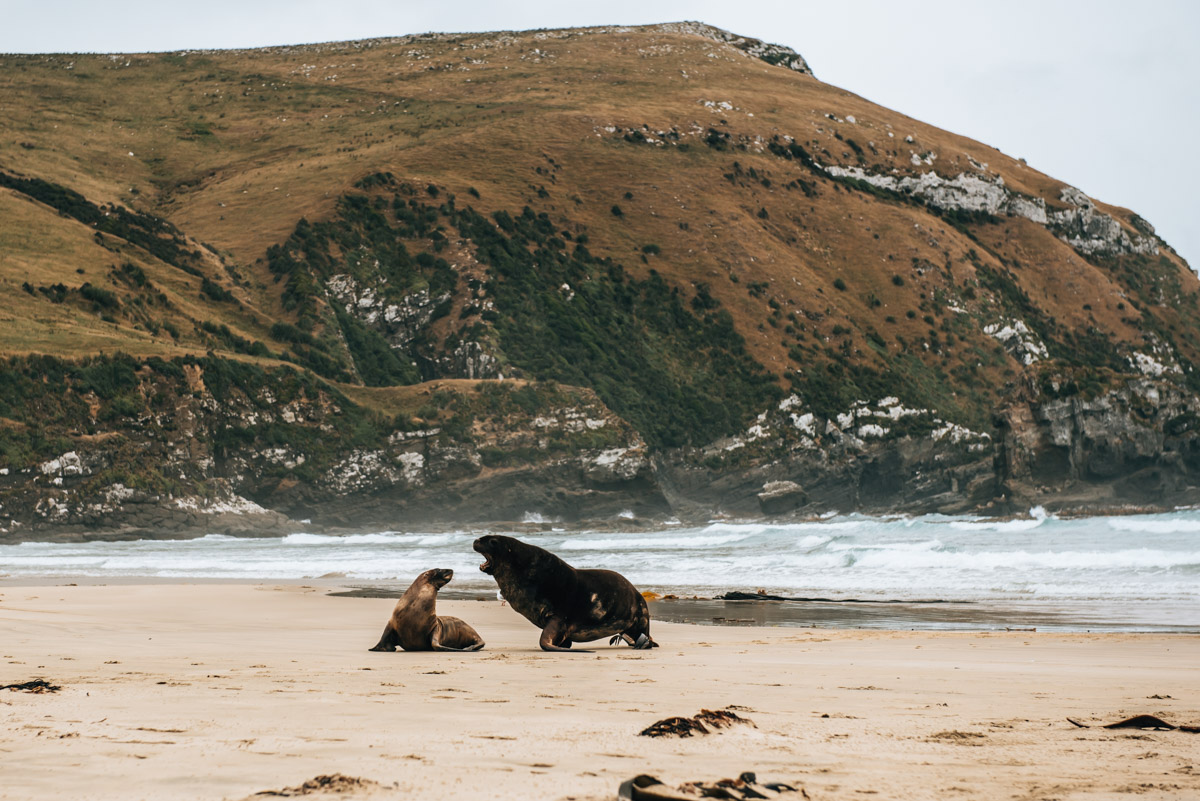 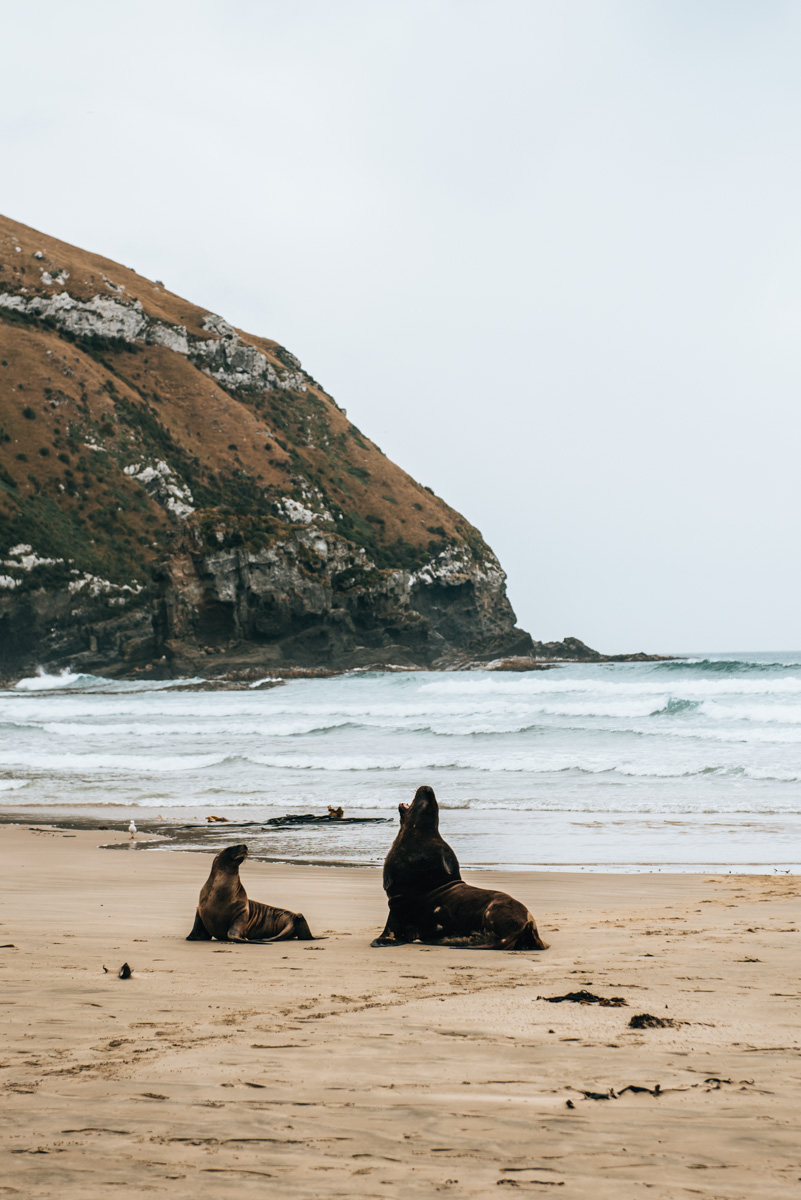 These cascading waterfalls are very picturesque, set in the middle of a forest and are supposed to be the most photographed waterfalls in the Catlins. The Purakaunui Falls are definitely worth seeing, but to be honest, we find the wild coastal landscape a little more intriguing. Perhaps because the waterfalls seemed a little dried up during our visit, thus making it less spectacular than normal.

Getting to the Purakaunui Falls 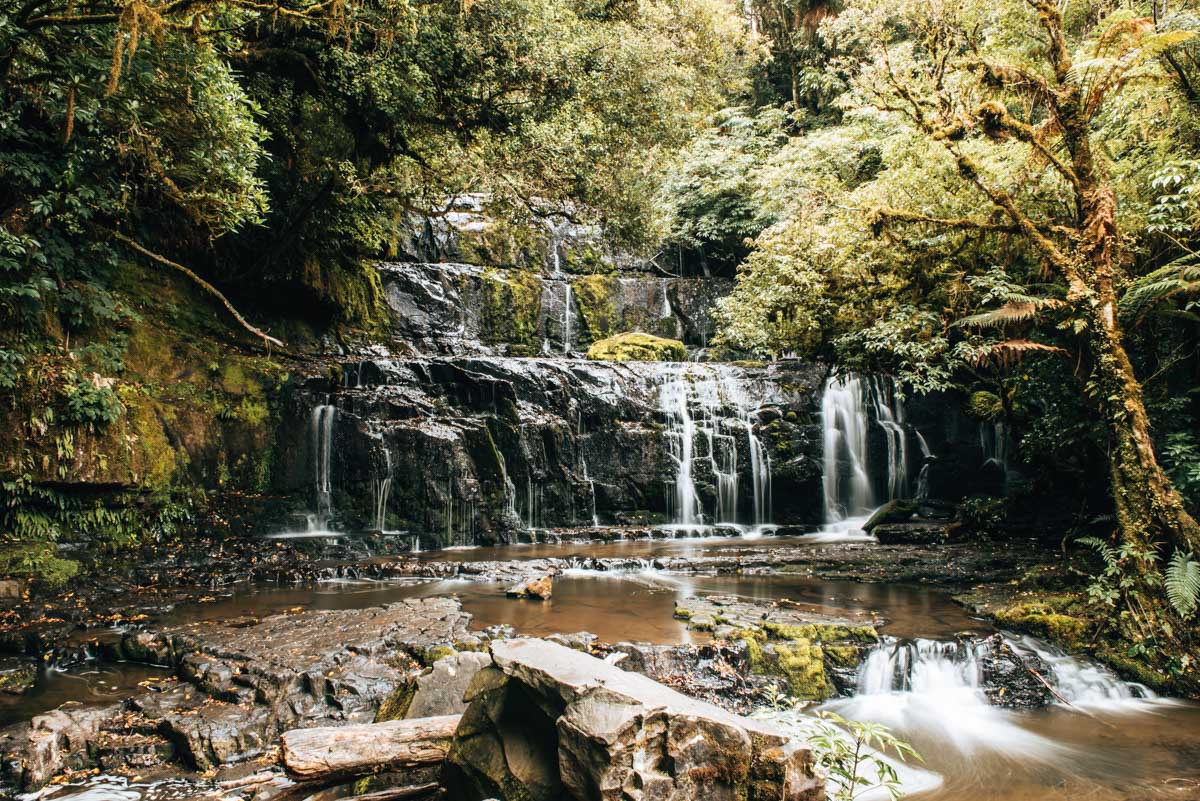 On the way from Purakaunui Falls to the Cathedral Caves you will pass the Florence Hill Lookout. This spot is definitely worth a short stopover. The view of the wild coastal landscape is just spectacular.

Getting to Florence Hill Lookout

The viewpoint is right on the Southern Scenic Route. So you can comfortably park the car and enjoy the view from there. 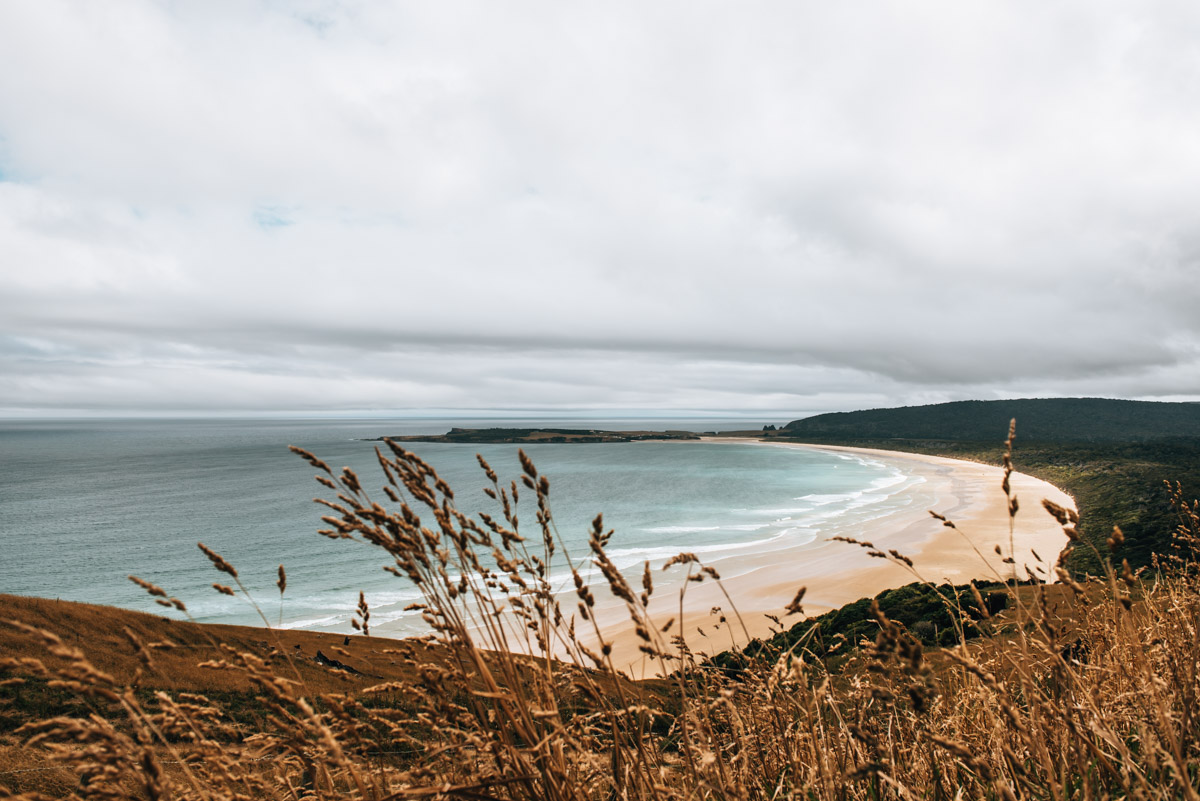 Only at low tide are these gigantic caves on the beach accessible. With their impressive height, they are reminiscent of a cathedral on the inside and thus the reason behind the name. It is quite scary to enter these caves knowing that just a few hours later, they will be completely flooded again.

Getting to the Cathedral Caves

The car park to the Cathedral Caves is just a short detour from the Southern Scenic Route. From the car park, you’ll encounter a 15-minute path that leads you downhill through the forest and to the beach. Once you get to the beach, make a left and you will reach the cave in about another 5 minutes.

Note: The Cathedral Caves can only be visited two hours before low tide and until one hour after low tide (for us it was between 7:30 in the morning and 20:30 in the evening.) Access is controlled and no exception is made. Admission costs 5 NZD for adults.

Current information about the visit can be found on the official website of the Cathedral Caves. 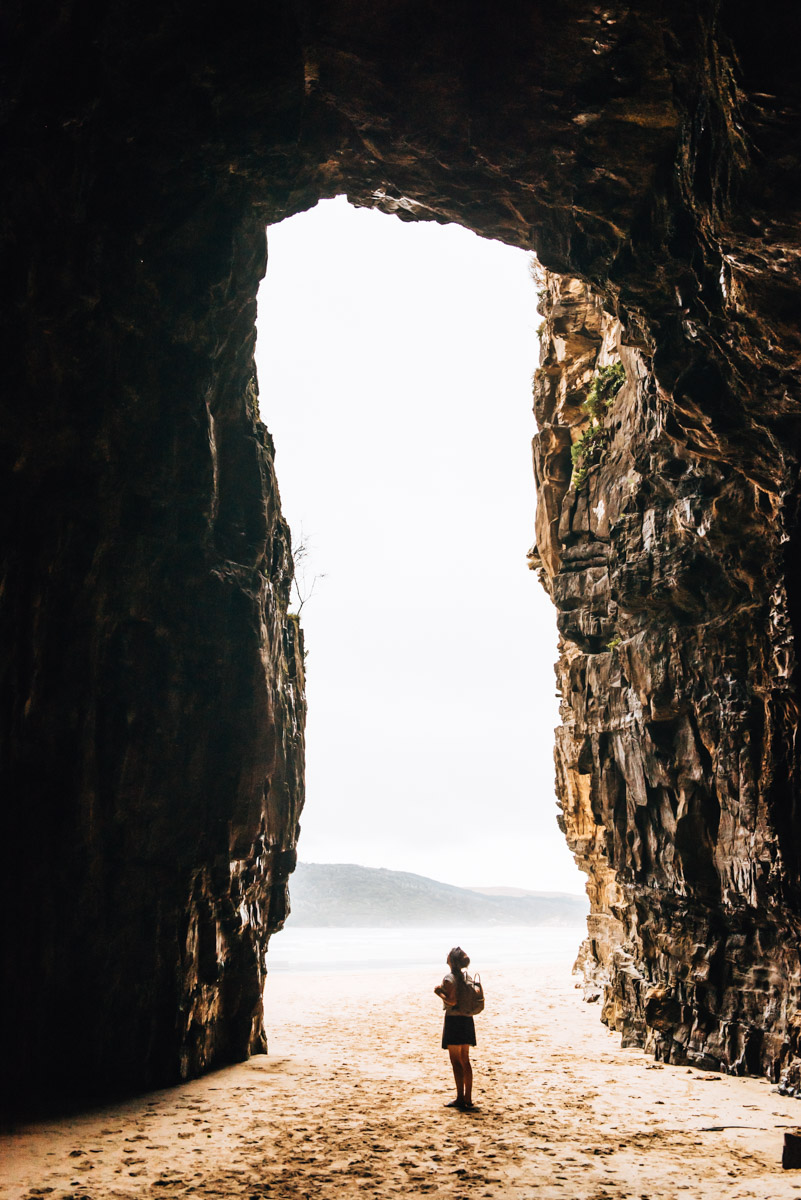 Quite far in the south of the Catlins lies Curio Bay. This bay is famous for its fossilised forest dating back to the Jurassic Era. At low tide you can marvel at the ancient beauty of these fossils. At first glance, they might appear to be like normal rocks, but on closer inspection you can see the grains of the fossilised wood.

That alone we found to be very fascinating and impressive. But something even more impressive here at Curio Bay were the mass number of penguins gathered here in the early evening. We regretted so much, not bringing binoculars with us that first time as the little critters were pretty far away. Incidentally, next to Curio Bay lies Porpoise Bay where, with some luck, you can observe the very unique yellow-eyed penguins and also the surfing hector dolphins who are often seen here.

Getting to Curio Bay

Curio Bay is located south of the Catlins, just off the Southern Scenic Route. You can park comfortably in the car park and reach both bays (Curio Bay and Purpoise Bay) within a short walk. 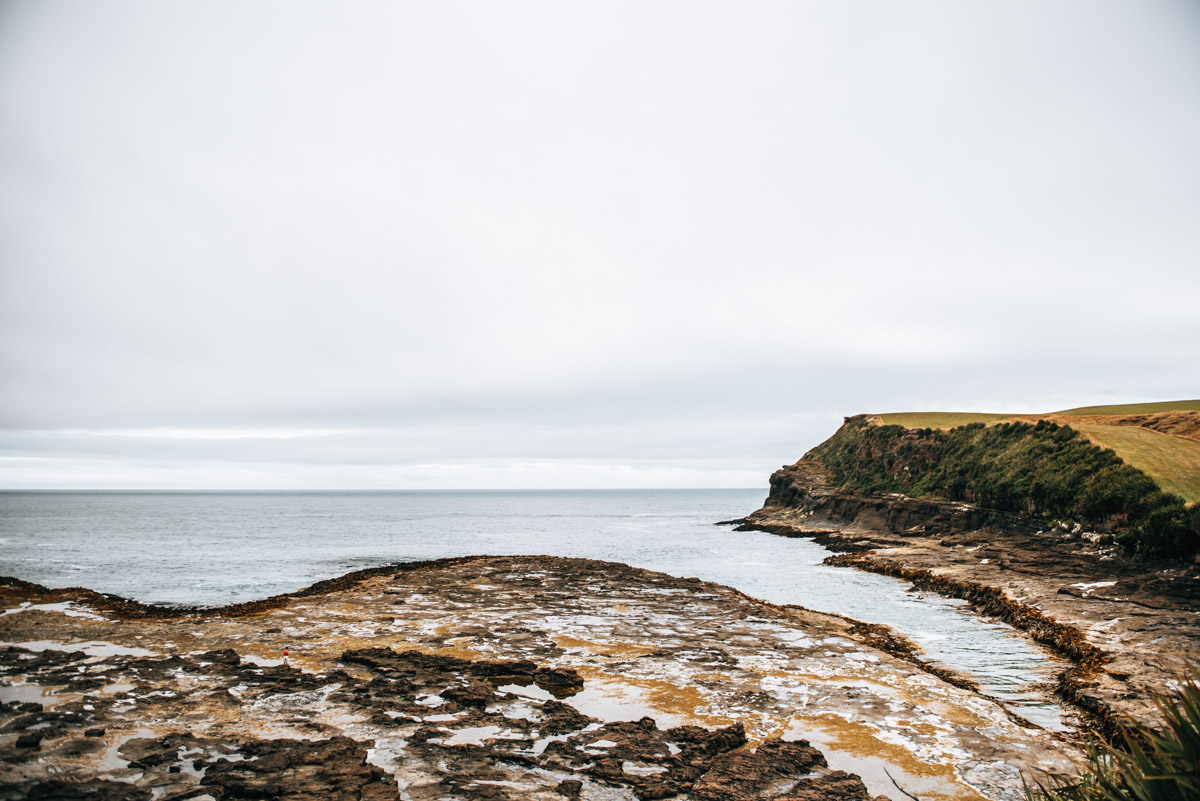 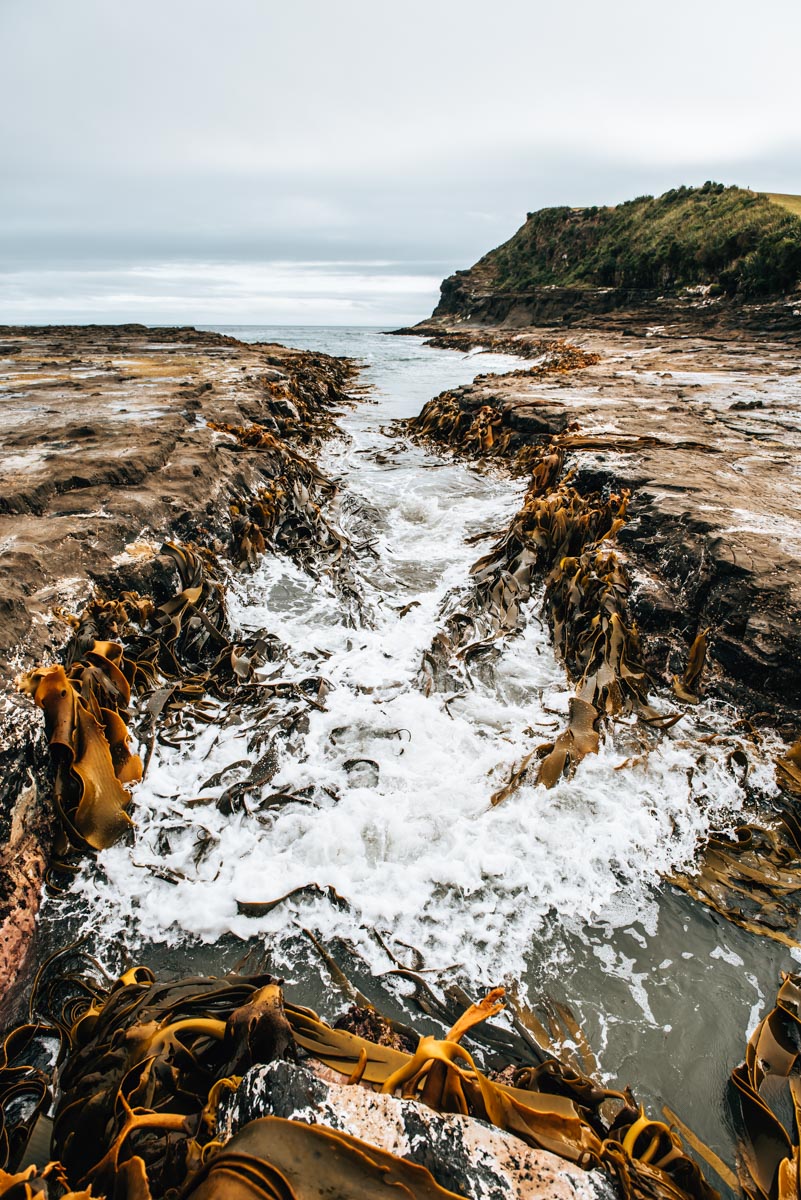 3. Accommodation in the Catlins

As we have now been to the Catlins twice and both by car, we have two accommodation tips for you. Both accommodations are located in Owaka, a town in the north of the Catlins, not far from the Nugget Point lighthouse.

Catlins Area Motel is a classic motel in Owaka. The decor may be a bit “stale”, but the apartments all come with kitchens and are very large with comfortable beds. The wooden table in front of our apartment was also the perfect breakfast place. We would recommend this motel especially to couples. The price performance ratio is very good!

Here is the link to the motel: Catlins Area Motel 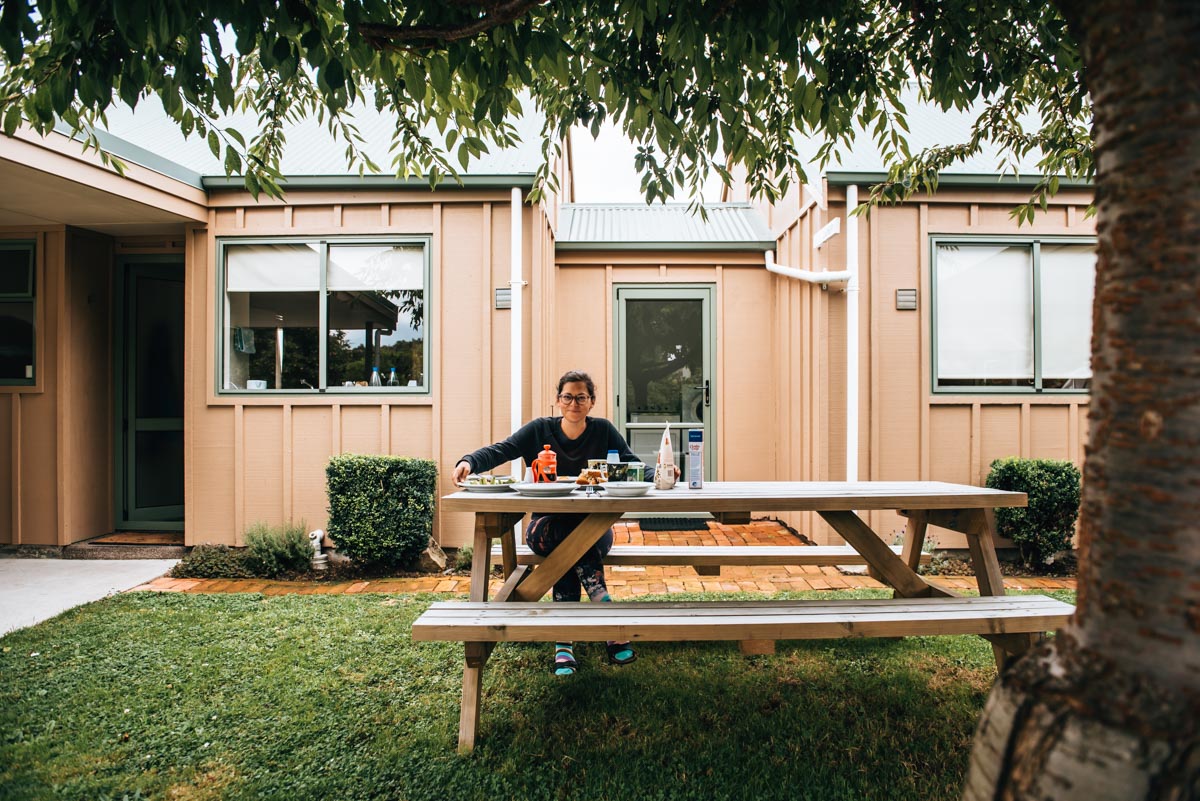 We stayed here on our first trip through New Zealand in 2013. We had booked a double room with its own private bathroom and were very satisfied. However, there are also dormitory options.

We would recommend this accommodation especially to young people. With more shared areas and a very nice garden area (plus a BBQ) it is more geared towards backpackers and we did meet quite a few young people there.

Here is the link to the lodge: Thomas’s Catlins – Lodge & Holiday Park

Camping in the Catlins

Probably the most beautiful campsite in all the Catlins is located at Purakaunui Bay. Although we were travelling by car and already had our motel booked, we wanted to see this campsite. The beach is so beautiful and the campsite is very idyllic.

However, it does come at a price: We were at Purakaunui Bay in high season and by early evening the campsite was already overcrowded. We never expected so many people in this barren desolate region. It is probably worth it, if you can get yourself a spot early enough. 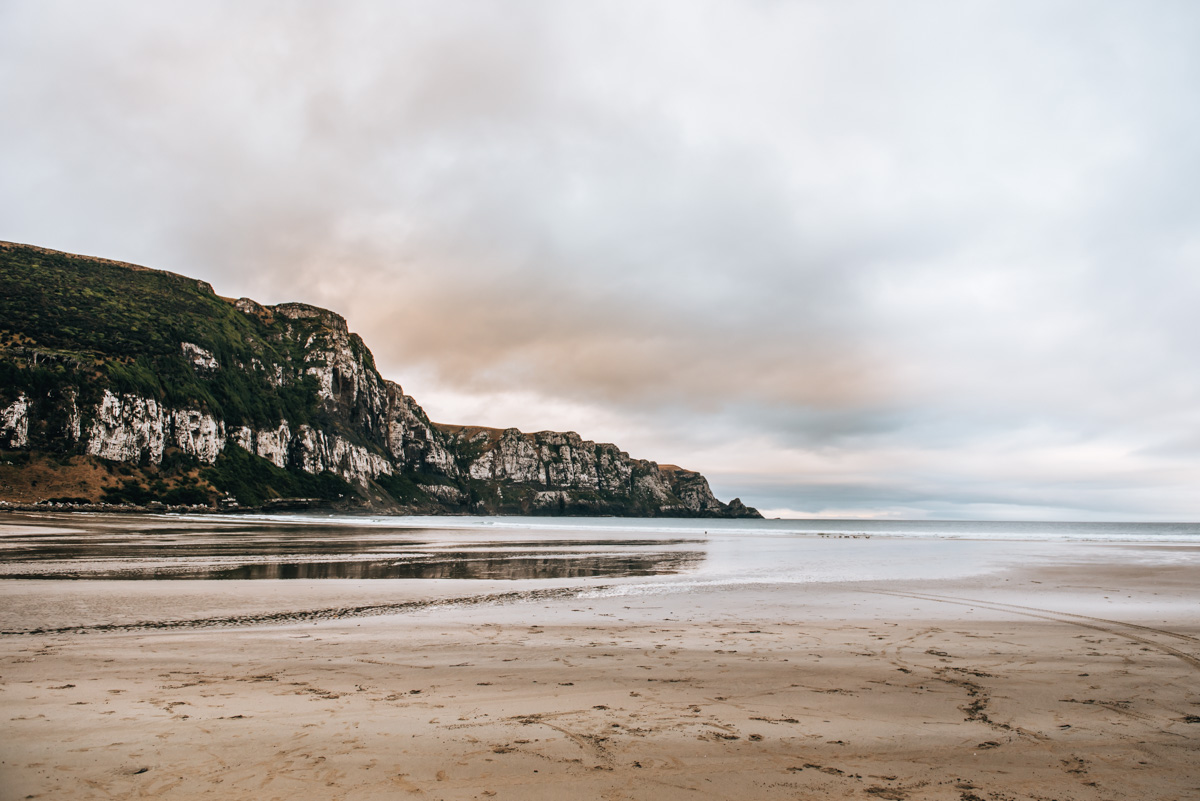 Disclaimer: This blog article contains our personal recommendations in the form of so-called affiliate links. If you book or buy something via the links, we will get a small commission. For you, this does not change the price at all. How great is that? For our rental car in New Zealand, we received a discount from Sunny Cars – huge thanks to them! However, this does not influence our opinion at all. We have booked several times through Sunny Cars (whilst paying full price) and always had a good experience.

Have you ever been to the Catlins? Do you have more tips to share or are you traveling to New Zealand and have some questions for us? Either way, we always look forward to your comments!